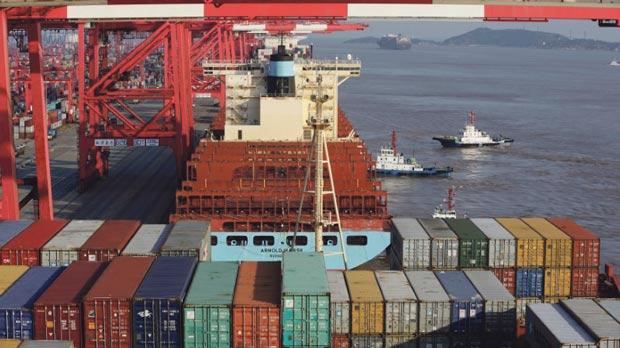 China’s September exports fell 10 per cent from a year earlier, far worse than expected, while imports unexpectedly shrank after picking up in August, suggesting signs of steadying in the world’s second-largest economy may be short-lived.

The disappointing trade figures pointed to weaker demand both at home and aboard, and deepened concerns over the latest depreciation in China’s yuan currency, which hit a fresh six-year low against a firming US dollar yesterday.

“This comes on the heels of weak South Korean trade data, and it definitely make us worry about to what extent global demand is improving,” said Luis Kujis, head of Asia economics at Oxford Economics in Hong Kong.

Asian stocks tumbled to three-week lows and US stock futures and Treasury yields fell after the data, while copper prices in London slipped. China’s exports had been expected to fall three per cent, slightly worse than in August, as global demand for Asian goods remains stubbornly weak despite heading into what is usually the peak year-end shopping season.

Weaker demand for Chinese goods was seen in nearly all of its major markets in the US, Europe and much of Asia.

Imports shrank 1.9 per cent, dashing hopes for a second rise in a row. Imports had unexpectedly grown 1.5 per cent in August, the first expansion in nearly two years, on stronger demand for coal and commodities such as iron ore which are feeding a construction boom.

That left China with a trade surplus of $41.99 billion for the month, the lowest in six months, the General Administration of Customs said yesterday. Analysts had expected it to expand slightly to $53 billion.

The weaker trade readings could raise concerns about the other September data and third-quarter GDP over the coming week. Economists had expected that data to show the economy was stabilising and perhaps even slowly picking up.

The import reversal raises questions over the strength of the recent recovery in domestic demand, Julian Evans-Pritchard at Capital Economics said in a note.

“This could be an early sign that the recent recovery in economic activity is losing momentum, although we would caution against reading too much into a single data point given the volatility of the trade figures,” he said. “The continued underwhelming performance of Chinese exports adds weight to our view that the People’s Bank will maintain its recent policy of gradual trade-weighted renminbi [yuan] depreciation in coming quarters,” he added.

Last month, the World Trade Organisation cut its forecast for global trade growth this year by more than a third to 1.7 per cent, reflecting a slowdown in China and falling levels of imports into the US.

“Sluggish external demand will continue to weigh on China’s trade outlook, given downside risks stemming from the US election to the UK’s execution of the Brexit process. We do not foresee exports being a growth driver of the Chinese economy over the next few quarters,” ANZ economists said in a note.

Not even a sharp increase in China’s Apple iPhone shipments could offset the broad-based downturn in September, ANZ added.

To be sure, China’s imports of crude oil rose 18 per cent on-year to a daily record, while iron ore purchases surged to the second highest on record, suggesting its demand for global commodities is hardly falling off a cliff.

Steel mills, in particular, appear to be running hot to meet demand from a housing boom and government infrastructure projects, which are driving higher profits though complicating government efforts to cut excess capacity.

But copper, coal and soybean imports all fell from August.

“China imported too much copper in the beginning of this year,” said Chris Wu, an analyst at CRU Beijing, a metals consulting firm.

“The lagging effect from the property market is still helping with some of the end use sectors, for example wire and cables and white goods, but we are afraid the boom is close to the end.”

A Customs spokesperson said yesterday rising imports of oil and other commodities showed demand was improving, adding that the government’s trade policies was having positive effects.

After a rough start to the year, China’s economy has shown signs of steadying, thanks largely to the building boom, but some analysts warn the housing frenzy may be peaking as more cities impose restrictions on home buying to keep prices from overheating.