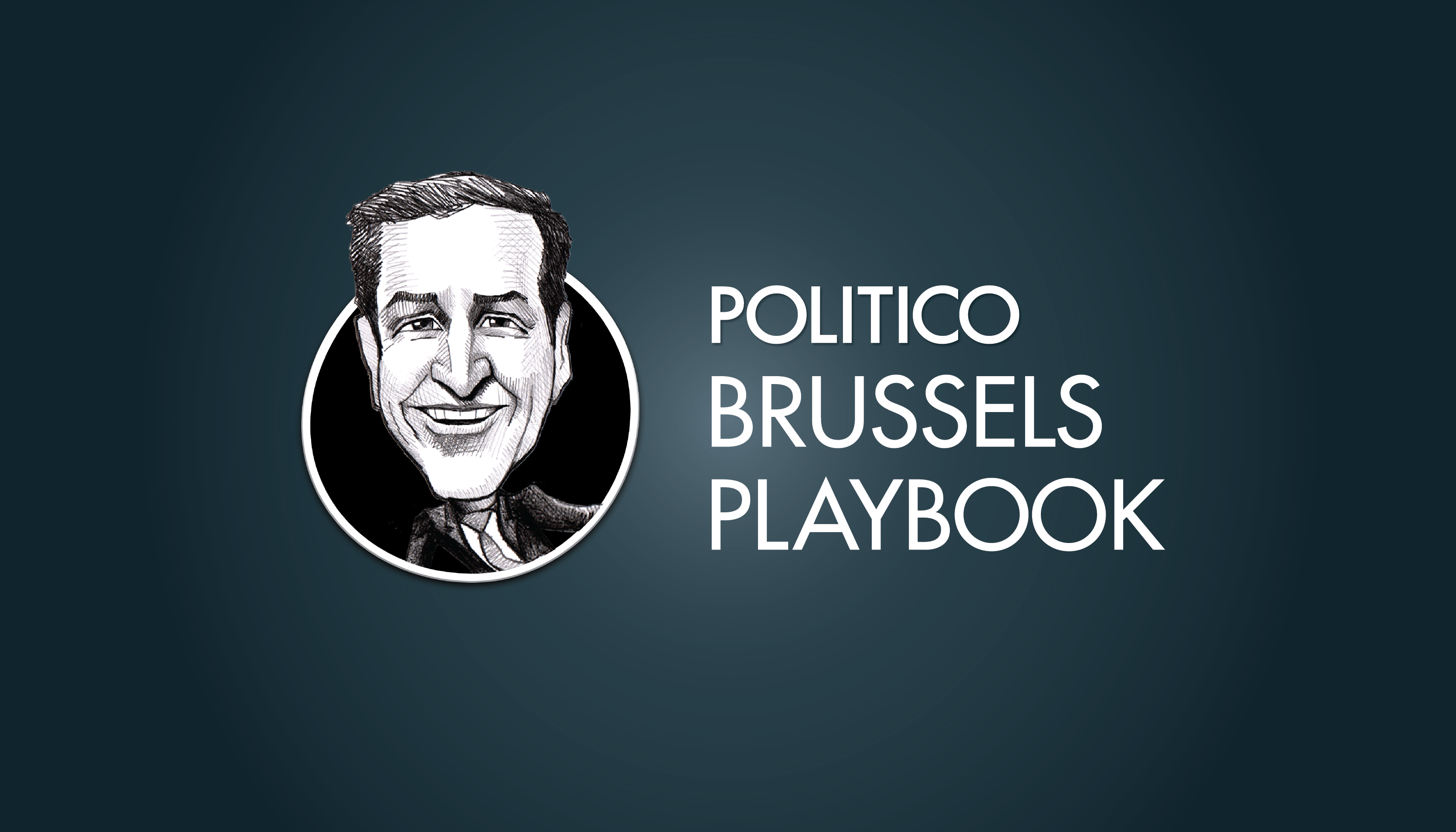 AROUND THE EU INSTITUTIONS

SCOOP — MARJUT SANTONI TO BECOME EUROPEAN INVESTMENT BANK SECRETARY-GENERAL: The 55-year-old Finnish banker trained in Germany and has worked in EU roles for two decades, and takes over what is effectively the bank’s chief operating officer role from March 1, incoming Playbook author Florian Eder reports. Her management style, in her own words, is “very Nordic,” she told Florian. “I’m a typical Finn, very direct, I don’t talk much, but when I talk, I say what I think.” She said she would take an entrepreneurial and team-based approach to the job. Her key task is helping the bank achieve its political objectives, without funding projects that can’t fly. Santoni’s passions include fast cars, fishing and mushroom-picking.

The EIB — the world’s largest multilateral borrower and lender — has been probed for gender discrimination and was rebuked last year by the EU’s General Court for blocking the promotion of a female employee. Santoni said she isn’t concerned about critics saying she was only promoted because of her gender. “If you work hard, you’ll climb up the career ladder at some point, and you’ll always be confronted with people saying, ‘Okay, you got the job because you’re a woman,’” she said.

ECB — SPAIN’S LUIS DE GUINDOS SET TO BECOME VICE PRESIDENT: The Spanish economy minister was the sole candidate for the central bank’s No. 2 job, after Ireland’s Philip Lane withdrew (both countries are run by EPP governments). De Guindos, who tried and failed to lead the Eurogroup during the Greek crisis, negotiated a €100-billion financial bailout in 2012 and oversaw a recovery that brought Spain back from the brink of bankruptcy, writes POLITICO’s Diego Torres. While Spain still has chronically high unemployment, it has recently outperformed most European countries on other economic indicators. EU leaders must now approve his nomination on March 22 before he can officially succeed Portugal’s Vítor Constâncio on May 31.

**A message from SolarPower Europe: If the EU wants a consumer-driven energy transition, we must empower consumers and small businesses to utilize small scale solar power generation, not hinder it or make it more expensive. The EU must support small-scale renewable installations to power the energy transition and empower citizens — this will make the green economy a local reality #SmallisBeautiful.**

COUNCIL — FINANCE MINISTERS MEET IN BRUSSELS: All 28 ministers meet today, after the 19 eurozone ministers met Monday. They are likely to sign off on Monday’s endorsement of de Guindos’ ECB role. Agenda here. Eurogroup President Mário Centeno was in good Greek spirits Monday evening, describing “a tremendous effort by the Greek government” for delivering on 108 of 110 requests for reform by creditors in his post-meeting remarks to reporters.

COUNCIL — TUSK MEETS ROMANIAN PM: Council President Donald Tusk today meets Romanian Prime Minister Viorica Dăncilă, as she continues her education tour about her government’s judicial and anti-corruption reforms. The proposals would change training and pension qualification rules for judges, meaning 2,000 of them could soon leave the system, with only a small pipeline of replacements. The corruption reforms would effectively give certain categories of corrupt politicians a get-out-of-jail card.

COMMISSION — WHAT’S NEXT FOR SUPER SELMAYR? Some interesting Twitter exchanges followed the publication of a Jean Quatremer story on Martin Selmayr’s 2019 job prospects. Quatremer reported Selmayr wants to stay on as presidential chief-of-staff, most likely in the service of a President Michel Barnier. Asked why Barnier and Selmayr needed each other, Quatremer noted the role of Elmar Brok MEP, the German godfather of the European People’s Party — Selmayr is his protégé. Another Playbook reader pointed out why Selmayr could be keen to stay on: If the Commission gets its way, his job would actually be to pull the strings of an EU super-presidency. Instead of merely running the Commission, Selmayr would also be the top political adviser at the European Council too.

COMMISSION — AVRAMOPOULOS SCHEDULED TO RESURFACE: Commissioner Dimitris Avramopoulos, who has kept a low profile since he was accused of corruption while serving as health minister in Greece, will participate in a hearing on reforms to the EU’s Schengen free movement area. Frontex Director Fabrice Leggeri will also appear. Both have denied any wrongdoing.

EU BUDGET — POOR REGIONS FEAR HEAVY CUTS THANKS TO BREXIT: Lili Bayer travels to the Czech Republic, which raked in €22.1 billion from regional subsidies during the EU’s previous seven-year budget cycle. That’s the equivalent of 34 percent of government capital expenditure and 2 percent of the country’s GDP, according to the European Commission. In the face of Brexit and other EU priorities like defense cooperation, Lili encounters fear and a survival instinct to find new funding.

EU BUDGET — OETTINGER MEETS ITALIAN FINANCE MINISTER, SPEAKS TO MEPs: European Budget Commissioner Günther Oettinger will today address MEPs and meet Pier Carlo Padoan, Italy’s finance minister, to discuss the next seven-year budget cycle, ahead of a discussion by heads of state and government later this week. European Parliament leaders agreed last week to set up a working group on the budget by mid-April to begin work on a proposal. The Council is expected to send its position, which must be agreed by all 28 countries, in February 2019, in time for a vote by Parliament in April, just before the European election.

ECJ — OPINION ON POLISH DEFORESTATION: Expect more Brussels-bashing in Warsaw. The advocate general of the European Court of Justice will today issue an opinion about the legality of logging in the primeval Białowieska forest, which the Commission claims goes against the EU’s nature-protection laws. The Polish government rejects the claims, saying the logging is necessary for forest management.

EUROPE’S NEW DATA RULES — WHAT THEY SAY, WHAT THEY MEAN: POLITICO’s Laurens Cerulus guides you through the brave new world of data consent, the right to reject automated decisions that affect your life, and what on earth under-resourced data protection authorities are going to do to manage it all when the EU’s new data regulation kicks in this May.

**The race to lead Artificial Intelligence is on. For months, EU policymakers have been discussing what Europe should do to embrace the phenomenon, but also appropriately regulate AI. And the verdict should come in April. Don’t miss POLITICO’s AI Summit: Innovation & Governance, the first global leadership roundtable centered on issues at the intersection of innovation and governance, on March 19-20 in Brussels. Register now and grab a seat alongside U.K. Minister for Digital and Creative Industries Margot James, Accenture’s Chief Operating Officer and Chief Executive, Europe, Jo Deblaere, U.S. House of Representatives’ Chair of AI Caucus Congressman John Delaney, Orange Labs Research’s Senior Vice President Nicolas Demassieux and Japan Council for Science, Technology and Innovation’s Executive Member Yuko Harayama, among others.**

MUSICAL EUROPE: Some 1,200 youths will put on the “Europe: What a Passion!” musical today in Milan’s Teatro degli Arcimboldi, as part of a EU-funded Jean Monnet project called “EUact.”

UK TO EU: PLAY FAIR OR NO CASH. Three senior U.K. officials told POLITICO’s Tom McTague that Britain could refuse to pay its debts to the European Union after Brexit if Brussels reneges on its commitment to a future free-trade deal. The political crunch point: The U.K. House of Commons is unlikely to support a draft Brexit deal if no free-trade model is agreed or, at least, sketched out.

IRISH BORDER DEAL IN SIGHT? Technical talks continue today. Eurasia Group wrote to clients Monday saying the EU and U.K. are closing in on an Irish border deal. A consensus would help prevent the derailing of the March European Council summit and could open the door to a transition deal, writes Mujtaba Rahman. However, he says Gibraltar’s status during the transition is now a major stumbling block. Playbook’s source says it’s too early to say whether an Irish border deal will be reached by March. The Commission is current working on the “backstop option,” as outlined in December’s joint report.

OZ REASSURES LONDON: Julie Bishop, Australia’s foreign minister, said she was keen to negotiate a new trade deal with greater visa access with the U.K. She also said Canberra would welcome the U.K. into the Trans-Pacific Partnership. The bit she didn’t mention is that Australia is pressing Brussels for a quick start to trade deal negotiations in coming weeks.

FYROM — HOPES NAME DISPUTE WILL BE SETTLED IN JULY: Prime Minister Zoran Zaev said on Monday he was confident his country would reach a settlement with Greece over its name by a NATO summit on July. More from Kathimerini.

ALBANIA — RAMA CALLS FOR JOINT PRESIDENT WITH KOSOVO: Officials in Belgrade slammed a suggestion made by Albanian Prime Minister Edi Rama that Albania and Kosovo, regarded as a breakaway province by Serbia and several EU countries, should have a joint presidency.

IRAN THREATENS TO FLATTEN TEL AVIV: Iran on Monday threatened to raze Tel Aviv if Israeli Prime Minister Benjamin Netanyahu followed through on a threat to act against it. “If they carry out the slightest unwise move against Iran, we will level Tel Aviv to the ground and will not give any opportunity to Netanyahu to flee,” said Mohsen Rezaie, Iran’s expediency council secretary. Netanyahu last week at the Munich Security Conference brandished what he said was a piece of a downed Iranian drone that had breached Israel’s airspace, saying: “Israel will not allow the regime to put a noose of terror around our neck. We will act if necessary not just against Iran’s proxies but against Iran itself.” More from the Telegraph.

THE MIGRANT CRISIS IN BRUSSELS: The New York Times describes police brutality against refugees living in tents in Brussels’ Maximilian Park. Many are from Darfur in Sudan and say they face deportation despite risks to their safety. Sarah Frederickx, a spokeswoman for the Belgian police, said officers are “very empathic and humane.”

HUMANS OF THE EU: Soundous Boualam, an assistant to Slovak MEP Boris Zala, has started a photo series modeled on Humans of New York, but themed around the euro bubble.

BEER VOTE: Brussels Beer Project is crowdsourcing its next beer flavors. Vote for your favorite here.

CHANGING ROLES: Jack Schickler is leaving the European Commission to work as a tax correspondent at MLex.

THANKS to Florian Eder and Carmen Paun.

CORRECTION: This newsletter was updated to correct an error.

**A message from SolarPower Europe: In December 2018, the Council decided to support policies that will smother opportunities for small-scale renewables, forcing them onto the same playing field as large energy producers and leaving them vulnerable in an electricity system without a functioning market. This would lead to an untimely decline in the uptake of small installations, which could be devastating to the EU’s clean energy future. Luckily, it seems the European Parliament is ready to fight back. Small generation installations empower citizens and territories: They create stable and local jobs, contributing to rural development. Small scale installations directly benefit SMEs, local communities and citizens to supply their heat and electricity needs from clean, local energy sources. Communities are leading the fight against climate change in Europe, and we must empower them with the tools they need instead of slamming the door in their face — #SmallisBeautiful!**