WASHINGTON — The Obama administration has used a flurry of tough-sounding trade enforcement announcements in recent weeks to counter complaints from the left and right that free trade is not fair trade — and to assist President Obama in the struggle to win approval of his trade pact with 11 Pacific Rim nations.

As evidence that past trade agreements are being policed, Mr. Obama and his cabinet members have trumpeted new complaints filed against nations alleged to be cheating, as well as the administration’s latest victories in previous cases taken to the World Trade Organization, the referee of global commerce.

Days apart in September, for example, actions were taken against Chinese grain exports, India’s barriers to solar-power parts, European subsidies for airliner manufacturing and foreign fishing subsidies. On Monday, the administration announced that it would press the W.T.O. for a special hearing demanding “the rapid enforcement” of the organization’s favorable rulings on exports of airliners and solar products.

With each announcement, administration officials have added a good word for the pending Trans-Pacific Partnership agreement, arguing that it would raise trade standards and provide more tools to enforce them.

Even opponents of trade agreements have said positive things about the administration’s enforcement record, though they say they will not be won over to the Pacific pact. Whether fence-sitting lawmakers can be persuaded is the question. Yet it might never be answered if Mr. Obama cannot get Congress’s Republican leaders — lashed by antitrade sentiment during this campaign season, especially from the party’s presidential nominee, Donald J. Trump — to hold a vote on the pact in a postelection lame duck session.

Since Mr. Obama took office in 2009, his trade office has lodged 23 challenges at the World Trade Organization and won or settled favorably all 16 cases decided so far. Fourteen of the 23 cases have been against China, three against India and others have involved the European Union, Argentina, the Philippines and Indonesia.

Interactive Feature | What Is the Trans-Pacific Partnership?

“In previous administrations, the enforcement record was basically miserable,” Representative Sander M. Levin, a Michigan Democrat who opposes the Pacific pact, told the Council on Foreign Relations last week. “Now I think there’s been an improvement in enforcement,” he added, “except it isn’t nearly enough.”

Thea Lee, deputy chief of staff at the A.F.L.-C.I.O., said she saw “a mixed record.” She praised administration efforts against maneuvers by other nations to underprice their manufacturers’ exports, which have harmed American manufacturing. But she criticized the record on enforcing labor rights and on combating nations that hold down the value of their currencies to lower the cost of their exports.

“On certain issues like antidumping and subsidies, and some of the issues dealing directly with China, the administration has done a good job, has been aggressive in bringing cases, winning cases and getting relief for workers and businesses that have been affected by unfair trade practices,” Ms. Lee said.

“But,” she added, “I think the failure to enforce has been egregious with respect to workers’ rights and currency.”

In their first debate, Mr. Trump initially had Hillary Clinton, the Democratic nominee, on the defensive about trade, as he questioned her sincerity in opposing the Pacific agreement. Mrs. Clinton restated her opposition and added a promise that as president she would name “a special prosecutor” for trade. 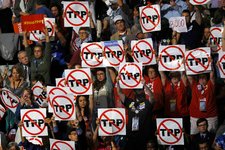 Interactive Feature | The Trans-Pacific Partnership, Explained The trade deal has become a flashpoint American politics, opposed by the presidential nominees of both major parties as a symbol of failed globalism and the loss of United States jobs overseas.

Vice President Joseph R. Biden Jr., stumping for the agreement at the port of San Diego in July, said the administration had been enforcing trade pacts “more aggressively than any administration in the past.” He added, however, “One of the reasons so many Americans are upset about trade is because we have not adequately enforced them” over time.

A desire for vigorous enforcement is perhaps the one thing that unites trade skeptics and pro-trade business groups.

John G. Murphy, senior vice president for international policy at the U.S. Chamber of Commerce, said he often speaks to state and local chambers, “and when I say that the agreements we sign aren’t worth the paper they’re written on if they aren’t enforced, I regularly get applause.”

The administration has “a strong record,” Mr. Murphy said, and he criticized trade opponents who favor tough enforcement but oppose the trade agreements that established the policing regimes.

In mid-September, the president took the unusual step of personally announcing the administration’s newest complaint to the W.T.O. against China — the country Mr. Trump has excoriated most — rather than leaving it to his trade representative, Michael B. Froman. The United States alleged that China excessively subsidizes rice, wheat and corn, encouraging farmers to grow more and distorting world markets.

“We have to ensure America plays a leading role in setting the highest standards for the rest of the world to follow,” Mr. Obama said, before adding, “That’s what the Trans-Pacific Partnership, or T.P.P., is all about.”

As part of the promotion, Mr. Froman and Tom Vilsack, the agriculture secretary, wrote a column for an Iowa newspaper last month. Mr. Vilsack is the state’s former governor, and its congressional delegation includes Senator Charles E. Grassley, a senior Republican on the panel responsible for trade. The column’s headline: “Protecting Iowa’s Access to International Markets.”

In the same week, the United States and a dozen other nations united in a campaign to ban government subsidies blamed for overfishing. China is considered a main culprit. That announcement, too, included a plug for the Pacific accord — for “including the first enforceable prohibitions on harmful fishing subsidies” in a trade pact and eliminating foreign taxes on American fish exports.

The W.T.O. also handed the administration two victories that it was quick to broadcast.

First, an appellate panel of the trade organization upheld a ruling that backed America’s complaint against India’s ban on imports of solar-power parts. The prohibition was blamed for a sharp drop in American exports of such products. The administration seized the moment to laud the potential benefits of the Pacific trade agreement for American exporters of clean energy products.

In the second decision, the W.T.O. ruled against European nations’ subsidies of Airbus, the aircraft manufacturer, finding that they had cost billions in sales for the American rival Boeing.

Such actions against other countries’ subsidies, dumping and market barriers, however, do not address two big concerns of trade skeptics: currency manipulation and workers’ rights.

Currency practices are tricky to police; other nations could counter with complaints about the monetary policies of the independent Federal Reserve, which affect the value of the dollar. Instead of writing mandates into the Pacific accord, negotiators attached a side agreement spelling out disclosure requirements and a consultation process for disputes between nations.

The administration did require Colombia to change its labor practices before the United States-Colombia trade pact could be approved, but Ms. Lee said improvements have come slowly or not at all. In Guatemala, where union organizers have suffered violence and assassinations, she said a case filed by the A.F.L.-C.I.O. and local unions was ignored in the George W. Bush administration and, despite some attention, has languished under Mr. Obama.

The Pacific agreement includes concessions from Vietnam, Malaysia and Brunei on labor and human rights. But, Ms. Lee asked, “Can we stop and figure out how to get that piece of it right before we take the leap of tying our economies together permanently?”