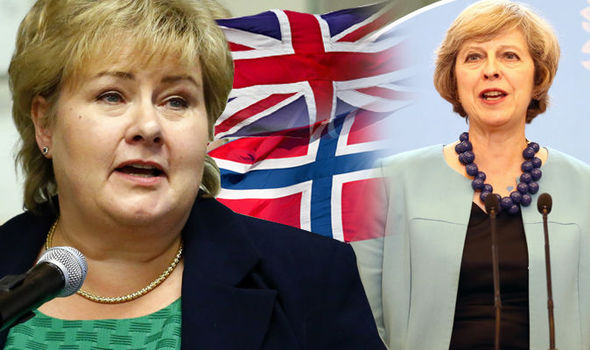 Oslo today significantly softened its stance on the UK becoming part of the European Free Trade Association (EFTA), after initially seeming to rule out British membership.

The trade agreement is between Norway, Switzerland, Iceland and Liechtenstein, and allows all four to enjoy access to the lucrative single market.

However, Norwegian politicians had expressed fears that Britain, which has a population four times bigger than those of the other members combined, would dominate the group if it joined.

“It’s easy to see some advantages of British membership. It’s a big country with a big economy.”

There are fears among EFTA nations Britain is too big to do business with, and that letting such a monster economy in would mean allowing a new partner to have a huge amount of clout when negotiating trade deals.

EFTA has about 30 free trade deals with nations including Canada, Chile, Morocco and Singapore, which could require renegotiaion if the UK joins the club.

British membership of the trade grouping looks inviting for all involved, Solberg said, but for it to work a number of issues must be examined.

In particular she cited farming as one example of a possible conflict of interest.

Britain exported food and drink worth 18 billion pounds ($24 billion) in 2015 while Norway imposes high import barriers to protect farmers in a country that stretches into the Arctic.

Solberg said: “I don’t think that the EFTA path is necessarily the way Britain should be interested in going.”

UK Prime Minister Theresa May has made no clear indications about Britain’s future in Europe, despite the vote to leave in the June 23 referendum.

May is yet to invoke Article 50, which will kick off exit proceedings, because she is hoping to build up relations with other EU leaders first.

But Solberg said her ruling Conservative Party in Oslo was in “continuous dialogue” with the Tories in Britain.

And despite harsh words from other EU nations, including France, Solberg has softened in her approach to dealing with the Brexit issue.

Germany has already voiced the prospect of granting Britain a special status in its post-Brexit relationship while France has pushed for a more hardline approach.

Solberg said: “It would be wrong to flag a veto or no veto now, and I believe anyway that we will find good solutions to these problems.

“Then all must be prepared for anything, if it turns out that Britain joins EFTA.”

Norway, Iceland and Liechtenstein also have free movement of goods, services and people with the 28-nation EU, while Switzerland is outside that deal.