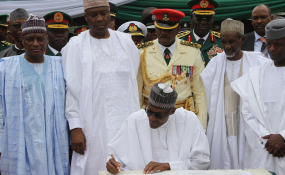 As you are aware, my delegate and I arrived in New York on Saturday, 17th, September and successfully concluded scheduled activities during the High-Level Segment of the 71st Session of the United Nations General Assembly yesterday, 23rd September. This is my second visit to the United Nations Headquarters since I took office as President of the Federal Republic of Nigeria in May, 2015.

While in New York, I participated in a series of meetings and side-events. I had bilateral meetings with some World Leaders and attended major events including the "Welcoming Reception" hosted by the Secretary-General and Mrs. Ban Soon-taek, and the Secretary-General's Official Luncheon on Tuesday, 20th September.

Of special note was my address to the World Leaders at the General Debate on Tuesday 20th which was the principal assignment of the visit. In that speech, I sent a clear and direct message to world leaders on a number of important issues notably:

(i) I highlighted the need for the international community to work together to liberate humanity from poverty, save our planet from the devastation of climate change and rid the world of terrorism for a more peaceful and prosperous future;

ii) Turning to our problems at home, I mentioned that the plight of Internally Displaced persons (IDPs) arising from Boko Haram terrorism is of particular concern to us. For this reason, we have taken concrete steps to address their humanitarian needs and to ensure that necessary conditions are established to enable the voluntary return of the displaced persons to their homes in safety and dignity;

(iii) I acknowledged that Nigeria as a developing country has been adversely affected by the global economic downturn. However, we are undeterred and have embarked on a wide range of reforms in our efforts to diversify our economy and shift emphasis to mining, agriculture, industrialization, infrastructure development and the creation of the enabling environment for Foreign Direct Investment;

(iv) To that effect, I noted that our strategic objective is to stimulate the economy, restore growth and accelerate recovery by taking measures to reduce the cost of governance and increase expenditure on infrastructure and ensure environmental best practices;

(vi) In this connection, I noted that speedy and unconditional return of stolen public assets should be the focus of the anti-corruption conference to be hosted by the US and UK in Washington next year;

(vii) On the subject of Climate Change, I told my audience that we are determined to implement the strategies in our Intended Nationally Determined Contributions (INDCs), which will foster low carbon economy and sustainable growth in building a climate resilient society;

(viii) Again on the subject of the environment, I informed world leaders that in furtherance of our commitment to environmental sustainability, Nigeria had launched the clean-up of Ogoni land in the Niger Delta, based on the 2011 Environmental Assessment of the area by the United Nations Environmental Programme (UNEP);

(ix) I acknowledged the importance of youth in national development and underlined our commitment to harness the potential of the increasing youth bulge and that we must take advantage of the numbers and creative energy of young people who are in the majority. Further to this, I called for the establishment of a specialized UN agency for youth development at the international level, to achieve this strategic objective;

(x) On the Isreali-Palestinian issue, I reiterated Nigeria's position in support of the Two-State solution with Palestinian rights to statehood in conformity with numerous Security Council Resolutions; and

(xi) Finally, I called on Member-states of the United Nations to redouble their efforts for the reform of the organization. I reiterated Nigeria's call for the reform of the UN Security council to reflect equitable and fair representation and greater transparency, legitimacy and inclusiveness in its decision making. I stressed that Africa should be adequately represented in the reformed Council in the permanent member category and added that Nigeria stands ready to serve Africa and the world on a reformed Council to advance international peace and security.

Other meetings and events where I participated and addressed World Leaders at different fora included the following:

- High-Level Plenary on addressing Large Movements of Refugees and Migrants on Monday 19th;

- African Union Peace and Security Council Meeting on Monday 19th which dealt with the situation in the South Sudan;

- Meeting hosted by Mrs Theresa May, Prime Minister of the United Kingdom on the threat of Modern Slavery (Trafficking in People) on Monday 19th;

- SDG Moment: to mark the 1st Anniversary of the adoption of the 2030 Agenda and the Sustainable Development Goals, on Tuesday 20th;

- The US-Africa Business Forum on Wednesday 21st, during which there was a Spotlight on Nigeria which afforded me an opportunity to speak on "Nigeria's Economic Reforms for Growth." I tried to attract American investors to Nigeria;

- My participation at a High Level meeting to commemorate the 30th Anniversary of the Declaration on the Right to Development, on Thursday 22nd reflects the administration's commitment to ensure that every Nigerian is afforded opportunity to develop his/her abilities and be enabled to contribute to the development of our country, Nigeria.

In continuation of our drive to diversify the economy, create a safe and peaceful environment for development to thrive in Nigeria, I met with the following notable World Leaders:

- HE Mr. Barack Obama, President of the United States of America;

- HE Mr. Johann Schneider-Ammann, President of the Swiss Confederation;

- HE Mr. David Granger, President of the Republic of Guyana;

In all those meetings I advanced Nigeria's case and called for international cooperation.

The US-Africa Business Forum organized on the margins of the General Assembly was timely. I addressed the meeting, which had in attendance a significant group of important CEOs. Discussions focused on how they can collaborate with us to diversify our economy, which will in turn drive development, job creation and general business development in Nigeria.

In continuation of my effort to attract Diaspora skills back home, I also met with a group of Nigerian Professionals living in US who have distinguished themselves in their various fields of specialization ranging from health, aeronautical engineering, customs, law enforcement, economics, business, law, education to politics. I extended an invitation to them to join us in our effort to develop our country. They in turn expressed genuine desire to contribute positively to the growth and development of our country.

Another issue that is very important to me and our country as well as our region is the importance of drawing international attention to the adverse effects of Climate Change in Nigeria and in our region. As you will recall, last year 12th December, 2015, I joined other World Leaders to conclude what is now called the Paris Agreement on Climate Change. On Thursday 22 September, I signed that Agreement at the United Nations Headquarters. Soon after the signing ceremony, we had an important meeting to discuss the issue of Environmental Sustainability. In Nigeria, this is a serious issue and my administration is making very genuine efforts to address the negative effects of climate change in order to build a clean and sustainable environment for our people and the future generation. The "Ogoniland Clean Up" which I launched and the effort to recharge the shrinking Lake Chad were subject of discussion at the meeting.

No single country and surely not the four most affected countries, can muster the tremendous financial resources required to turn around the very dire situation of the Lake Chad Region. The millions of people whose daily livelihood have been placed in jeopardy are depending on us to find succor for them. I am happy to note at the sessions, some countries notably the United Kingdom and USA pledge additional support in the tune of US $391 million humanitarian aid for the Lake Chad region.

All in all, it was a very successful and useful session, and I would like to thank the relevant US authorities who by their efficient coordination of security and administrative arrangements during our stay in New York contributed to its success. The men and women of the Ministry of Foreign Affairs demonstrated that we still have capable officers in our Foreign and Civil Service. Thank you for your tireless efforts in projecting a positive image of our country, even in difficult times.

To you in the media, who went through elaborate security checks and clearance procedures to follow my activities and hectic schedule in order to keep all our people at home well informed of my meetings and engagements here in New York, you also deserve my appreciation. Our next interaction will be in Abuja.

Thank you one and all.