WASHINGTON — Hillary Clinton made it abundantly clear Wednesday night that if she defeats Donald J. Trump next month she will enter the White House with the most contentious relationship with Russia of any president in more than three decades, and with a visceral, personal animus toward Vladimir V. Putin, its leader.

“We haven’t seen a you-can’t-trust-these-guys tone like this since the days of Ronald Reagan,” said Stephen Sestanovich, who served in President Bill Clinton’s State Department and is the author of “Maximalist: America in the World from Truman to Obama.” “But even that was more a systemic criticism of the Soviet Union. This is focused on Putin himself.”

In a reversal of political roles, Mrs. Clinton, the Democratic candidate, is the one portraying Mr. Putin as America’s newest archenemy, whose underlings hack into her Brooklyn campaign headquarters, bomb Syrian civilians and threaten Ukraine and NATO allies in Europe. For a woman who presented a big red “reset” button to her Russian counterpart in March 2009 (with the word incorrectly translated into Russian), the change in tone was more striking than ever in her debate with Donald J. Trump.

She, and the Obama White House, insist they were on the right course until Mr. Putin decided he had more to gain from reviving Cold War tensions than from a quarter-century effort to integrate with the West. Now, much of the Democratic foreign policy establishment has become as hawkish as Mrs. Clinton on the subject of Russia, a view that seems almost certain to outlast the campaign.

Privately, some of her longtime advisers are already thinking about what mix of sanctions, diplomatic isolation and international condemnation they might put together if they take office to deal with Mr. Putin and the fragile economic state he runs, an update of the “containment” strategy that George F. Kennan formulated for President Harry S. Truman in 1947.

Equally surprising is the Republican reversal of tone. Only four years ago, it was the Republican presidential nominee, Mitt Romney, who was warning of the dangers of a revanchist Russia and President Obama who said “the 1980s are now calling to ask for their foreign policy back,” noting that “the Cold War’s been over for 20 years.”

Most of the Republican Party remains firmly distrustful of Russia. But not Mr. Trump, its standard-bearer.

“If the United States got along with Russia, wouldn’t be so bad,” he said Wednesday, uttering not a word about Mr. Putin’s land grabs. Instead, he urged viewers to “take a look at the ‘Start Up’ they signed,” apparently confusing the lingo of Silicon Valley with New START, the 2010 arms control treaty. The problem, he said, is that Russia is outbuilding the United States’ nuclear arsenal — it is not, at least so far, because of the treaty’s limits. The debate then devolved into an argument over which candidate was Putin’s puppet. 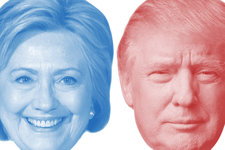 Time after time, Mr. Trump has insisted, as he did during Wednesday’s debate, that the United States has “no idea” who was behind the hacking of the Democratic National Committee and Mrs. Clinton’s aides. “Putin has outsmarted her and Obama at every single step of the way,” he argued, from Syria to the development of new missiles.

For days, hacked emails from the Gmail account of John D. Podesta, Mrs. Clinton’s campaign chairman, have embarrassed her campaign, and on Thursday, emails from an account Mr. Obama had during his 2008 transition surfaced for the first time. No one knows if the hacking campaign is winding down or whether the revelations so far are simply a prelude to something bigger between now and Election Day.

Mr. Obama is considering retaliation that, according to several senior officials, could include attacks inside Russia that could expose corruption among the leadership and embarrass Mr. Putin. It is not clear whether Mr. Obama will choose that route, even after Vice President Joseph R. Biden Jr. issued a threat last weekend that Mr. Putin could get some of his own medicine.

But it is clear that if Mrs. Clinton wins, she will enter the White House with a very personal grudge against Mr. Putin. He, in turn, has long harbored a grudge against her for her statements in 2011 calling into question the validity of a Russian parliamentary election.

It is possible, Mr. Sestanovich warned, that Mrs. Clinton and the Obama administration are seeing Mr. Putin’s direct hand in too many events. He questioned how the director of national intelligence, James R. Clapper Jr., would know for certain that the Kremlin leadership was behind the hacking of the Democratic National Committee and the emails of Mr. Podesta and Colin L. Powell, one of Mrs. Clinton’s predecessors as secretary of state. The United States has released none of its evidence, so it is unclear if the conclusion was based on an educated guess about Kremlin operations, an “implant” in Russian networks, or a human spy or communications intercept.

But it is clear, Mr. Sestanovich said, that Mr. Putin is using this moment of leadership transition to press for any advantage, with methods such as using information warfare techniques on American soil, intimidating Ukraine, and running major military exercises on the border with Norway.

Not surprisingly, some Democrats on the left find all this a bit unnerving. “That reckless branding of Trump as a Russian agent, most of it is coming from the Clinton campaign,” Stephen F. Cohen, a professor emeritus at New York University and Princeton, told CNN in an interview over the summer. “And they really need to stop.”

In fact, many in the Democratic Party have spent decades invested in bringing Moscow into the Western fold, dating to the days when President Bill Clinton first met with Boris Yeltsin, then the Russian president, and began the process of expanding the Group of 7 industrialized countries to the Group of 8. They also began the long process of bringing Russia into the World Trade Organization, an effort to wrap the country in Western-created rules. The nuclear arsenals on both sides shrank by more than 80 percent, to 1,550 deployed warheads on each side under New START, which Mr. Obama negotiated in his first year in office.

The treaty remains in effect. But there are arguments over new weapons, and a major program to dispose of military stockpiles of plutonium was halted this month by Mr. Putin, citing the deterioration of relations with the United States.

And it is Mr. Trump who says he can reverse all that, with good negotiations, if he is president.

“I think I could see myself meeting with Putin and meeting with Russia prior to the start of the administration,” he said in an interview with Michael Savage, the talk show host, this week. “I think it would be wonderful.”