Lobster fishermen in New Brunswick and across North America are awaiting an announcement from the European Union’s committee on invasive species that will offer a recommendation on whether to ban the importing of North American live lobsters.

This comes after Swedish officials found 32 North American lobsters in their waters and raised concerns lobster may be an invasive species.

Gilles Thériault, a New Brunswick seafood industry consultant, says the announcement could have massive consequences on the lobster-fishing industry.

“It would have some overall consequences to the lobster industry in the sense that it is estimated [North America exports] over $100 million worth of lobster to Europe,” he said.

“And that represents anywhere between 10 to 15 per cent of the total [North American] production.”

Thériault said the lobster-fishing industry has reacted strongly and has made presentations to Canadian and European government agencies.

“Canadian exporters have been talking to their clients in Europe and have also been asking that they intervene to stop this from happening. It’s been a concerted effort from all angles,” he said.

According to Thériault, one of the concerns the Swedish government has raised is that the North American lobsters may be carrying diseases that could threaten the European lobster.

There are three identified diseases.

One is non transmittable, the other applies to the shrimp industry and the final one hasn’t been found in lobsters for more than a decade, says Thériault. 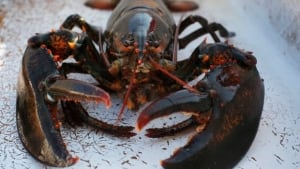 A call by Sweden to halt the importation of live North American lobsters into the European Union has the attention of New Brunswick lobster fisherman. (Brian Snyder/Reuters )

Anders Wall, who works at a fishing supply store in Sweden, told the CBC that an additional concern was that North American lobsters reproduce faster than the European species.

Wall hands out information pamphlets to fishermen to help them identify the foreign species.

Thériault said that some members of the lobster industry believe the proposed ban could have commercial motivations and that the lobsters found in the European waters could be the result of industrial sabotage.

“The only thing that we could see is it could have been intentionally dropped there by someone with a vested interest.”

Thériault is confident that the European Union’s committee on invasive species will not support the ban.

He said that even if it does, a complaint could be made to the World Trade Organization in order to stop the ban.