Museveni: Refugees should be treated well, with respect

President Yoweri Museveni addressed the Leaders Summit on Refugees at UN general assembly in New York, calling for refugees to be treated with respect by their host countries just like other citizens. 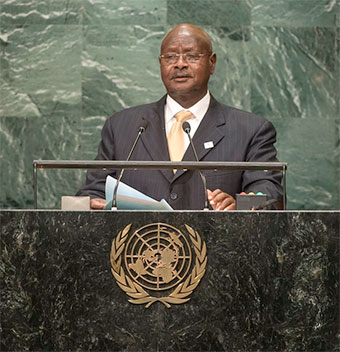 Uganda ranks third after Ethiopia and Kenya in hosting the biggest number refugees in Africa. The UN has recently praised Uganda for opening up her borders for refugees - giving them materials to construct their homes, land for farming, offering them free education and health services among other.  Below is Museveni's statement in full

On behalf of the Government of Uganda and on my own behalf, I wish to take this opportunity to thank you for inviting Uganda to participate in this very important Leaders Summit on Refugees.

Apart from the Polish refugees that Uganda hosted in the Second World War, most of the refugees that come to Uganda are from within Africa.

They are, usually, from: Rwanda, Burundi, Congo, South Sudan, Kenya, Somalia, South Africa (in the past) and smaller numbers from Ethiopia, North Sudan, Ethiopia, Libya, Central African Republic and Eritrea.  As of today, there are 690,000 refugees in Uganda.  We estimate that they will reach the figure of 810,000 refugees by the end of this year, 2016.

These refugees are running from sectarian persecution occasioned by the ideological bankruptcy of the groups involved that rely on indisciplined and criminal armies or militias.  Sometimes, they are running away from ideologically bankrupt and criminal rebel groups.  Some of the refugees are, however, themselves criminals that have committed horrendous crimes against fellow citizens.

The Interahamwe of Rwanda fall into this category.  We should always know the genesis of each refugee problem.  In order to end the phenomenon of refugees, the ideology of sectarianism must be condemned and banished by the AU, supported by the UN.

All stake-holders in Africa should accept the platform of anti-sectarianism as a minimum platform in terms of governance. The poor refugees, having run from their tormentors, must be treated humanely by the countries of their refuge.  The refugees that come to Uganda, are part of the cultural groups of the Great Lakes.

We do not pay attention to the colonial borders which some actors, oblivious of the higher African interest, fetishize as if they were made by God when, in fact, they were made by imperialists in Berlin in 1884 when Africans were asleep and disorganized.  Eventually, we rallied and resisted colonialism, leading to our victory starting with the Independence of Ghana, in 1957.

It is, therefore, not correct to treat African refugees as if they are flukers seeking to consume the resources of the indigenous people. I tell Ugandans that these are your unfortunate brothers and sisters having the misfortune, for the moment, of being misgoverned or being unprotected against demonic rebels.

Yet, all this notwithstanding, these refugees have their clan lands from which they fled, they have their heritage and when peace returns to their tormented land, they will go back and become your treasured partners in production and exchange of goods and services with their former hosts.

As far as the farsighted is concerned, even the time in exile is important and useful, especially in Africa.  It becomes the time when they re-establish links with the cultural relatives that were cut off by colonialism.  It is the time to establish future business links.

The refugees from Rwanda that lived in Uganda for more than 30 years, when they got back to their country, one of the first things they did was to establish the first bus-service links between Rwanda and Uganda for the first time in the history of man.  Therefore, the former refugees had turned into very useful business and development partners of their former hosts and vice-versa.

While in exile, therefore, both out of humanness and far-sight, the refugees need to be well-treated.  They should stay in camps for easy management.  If, however, they get jobs, they should not be discriminated.  They should be allowed to do business if they are able.

The humanitarian agencies should ensure that their children get education and skills so that, by the time they go back to their country, they are empowered and their time in exile has been turned into an advantage.

However, the refugee hosting countries do face additional problems.  When the communities are still using the bio-mass for fuel, big refugee populations will cause additional deforestation problems.  This should not happen.  Alternative energy sources should always be quickly found e.g. hydro, solar, wind, etc. 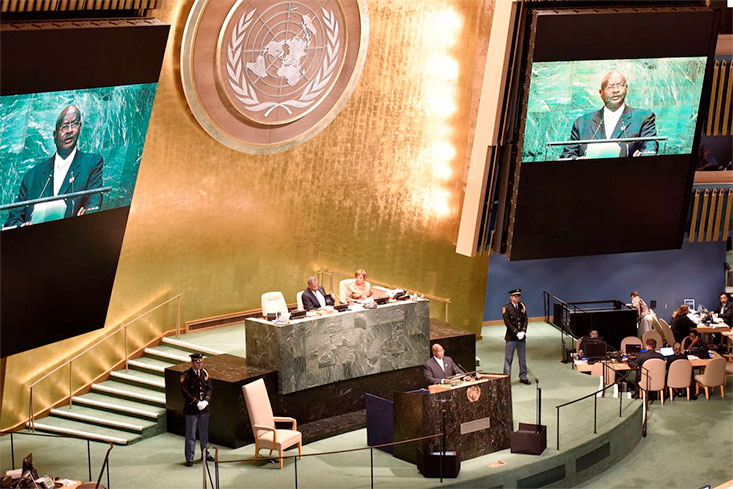 Water resources should be tapped so that both the local and the refugees do not have to walk long distances.  In the case of Uganda, many of the refuges are near the Nile.  The UNHCR could easily clean this water.  The Uganda government has already  provided water for the towns of Adjumani, Moyo and Bibia.  The additional influx of refugees had not been planned for.  Surely, the UNHCR can easily understand the simple arithmetic of additional refugees.

The other local problem is building materials.  Again, the trees are the culprits.  The UNHCR could work with the private sector in Uganda to develop the use of local materials to create pre-fabricated building materials out of the biomass so as to build houses quickly for the refugees instead of relying on perishable wood and polythene sheeting (Kaveera) that destroys and poisons the environment.

The refugees, therefore, need feeding, clothing, shelter (without destroying the local wood stocks), energy (electricity), clean water and water for production, education and skills and the correct ideology so as to solve the root cause of these refugee issue.

In Uganda, we believe in just and unjust wars.  What is the sort of war that has generated these or those refugees?.  Is it a just war or a war of aggression being prosecuted by chauvinists?  Besides, as we handle refugee generating situations, we should be wary of opportunists who are always recruiting sponsors from outside.

If a conflict is really justified, in order to fight for justice with war being the only means of resistance and national salvation, the people can successfully wage a people's struggle without external sponsorship.

It is a tragic criminality.  In Uganda, we fought vicious dictatorships and defeated them without external sponsorship.  Much of the chaos in the world is avoidable.  In the Book of Proverbs, Chapter 2 verse 14: It says, in my dialect: "Ziryabareeba ababikora, naabo ababi shemerererwa".  The exact quotation says: "They will suffer those who enjoy doing evil and celebrate perversion".