Ministers will NOT try and get a new deal on free movement in the EU just a week before the referendum despite Brexit's growing poll leads, George Osborne insists 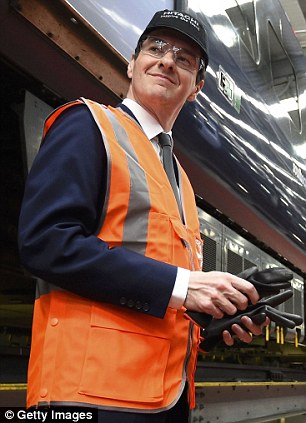 George Osborne today denied there would be any attempt to change the rules on free movement in the EU as the Remain campaign scrambles to save its referendum hopes.

The Chancellor denied reports which emerged overnight there would be a last-ditch bid to change a deal with the EU.

Amid a slide in the polls for Remain, campaign sources suggested to the Guardian Downing Street was looking at how to reopen the issue.

But Mr Osborne denied the story to the BBC today.

He said: ‘The short answer is no, because we have a plan and the plan is to restrict the welfare that people get when they come to this country so you don’t get out until you put in.

‘That is the plan we will implement, with the agreement of our partners.

‘It is part of a multi-pronged attack to deal with people’s concerns about immigration, controlling it from outside the EU, dealing with abuses of free movement, also crucially seeing the European economies now growing actually at roughly the same rate as the British economy.

‘I think all of those things will help address those concerns.’

The Chancellor insisted the Government had a plan to deal with ‘abuse’ of free movement via welfare reform.

And he added: ‘(We are) making sure that the European economies grow and in the most recent quarter of economic activity, actually the Eurozone economies were growing faster than the American economy, or indeed the British economy.

Addressing widespread concern among Labour supporters over the consequences of long term mass migration, Mr Watson said people were being deliberately misled by the Out campaign.

Mr Watson insisted the UK could take action now to ensure a fair deal for British workers by reviewing all EU directives.

‘The Tory Government has failed to stop employers advertising UK jobs only abroad. They should do.

‘And there is a loophole in the Posting of Workers Directive that allows employers to import workers from another country at lower rates of pay.

‘That’s undercutting British workers and could be stopped. We are pushing the Government to work in Europe to close that loophole.’ 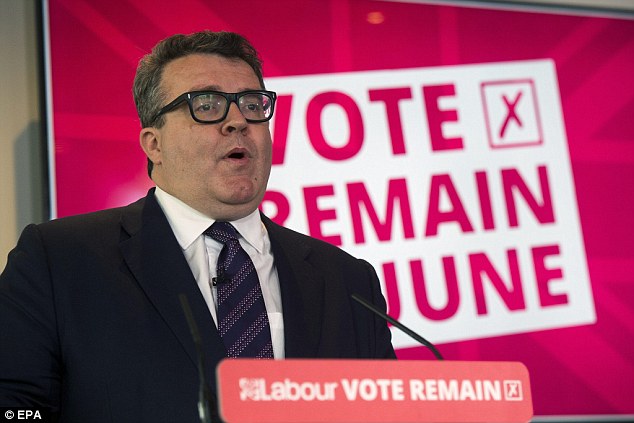 Mr Watson continued: ‘But we must listen to what voters are telling us on the doorsteps. In my view we must go further.

‘There should be a root and branch review of all directives, to ensure UK workers are not undercut and migrant workers are not exploited,’ Mr Watson said at a campaign rally held outside upmarket food store Waitrose in London.

SCOTS ‘COULD KEEP ENGLAND IN THE EU AGAINST ITS WILL’

Strong Scottish support for Remain could keep England in the EU against its will, experts warned.

Tory MPs said a result in which Leave sentiment in England and Wales was overruled could damage the Union.

Professor John Curtice, a political scientist at Strathclyde University, said: ‘Scotland is certain to Remain… also in Northern Ireland. We’re looking at polls in England and Wales where the Leave side are ahead. If we only get 51 per cent support for Remain, almost undoubtedly Scotland and Northern Ireland would have been pivotal in keeping the UK in the EU.’

Tory MP and Out campaigner Bernard Jenkin said: ‘Unionists in Scotland and Northern Ireland should vote Leave to prevent this damaging the unity of the UK. It would add to the strain between different parts of the UK.’

The party’s deputy leader said concerns on the impact of immigration needed to be listened to.

‘Now we have a deregulated labour market and that allows unscrupulous employers to undercut pay and exploit migrant workers. And unscrupulous businesses can undercut good businesses by pursuing a race to the bottom.

‘It isn’t migrants to blame for lower wages, this has been going on well before Polish plumbers and Spanish care workers came here.

‘And let me also talk directly to those workers who are concerned about job security and their weekly wage: don’t let the hard right Tory ideologues who are pulling the strings of the leave campaign fool you. They’re not interested in you or your family.

‘To them you are a commodity, a mere unit of Labour. They have no intention of protecting you, investing in you, or helping you. They just want your vote and they’ll tell you anything you want to hear before next Thursday,’ he said.

BACK BREXIT FOR A PAY RISE! TORY VETERAN JOHN REDWOOD CLAIMS ITS IMPOSSIBLE TO KNOW WHERE THE ECONOMY WILL BE IN 20 YEARS BUT FOR NOW WE’RE MUCH BETTER OFF OUT 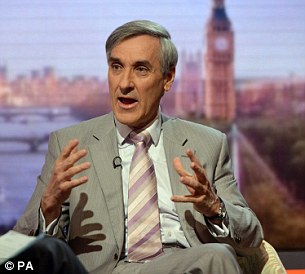 Leaving the EU should boost pay and create more jobs. Spending our own money on our own priorities ensures that is true from the first post Brexit budget onwards.

The dreary gloomy predictions of Remain are all based on the absurd idea that the rest of the EU will want to impose new barriers on their trade with us, and will be able to do so.

As we are more the customer than the supplier and as we and they live under World Trade Organisation rules this is pure fantasy.

The issue in dispute is will be even better off if we leave or stay? 2030 is too far ahead to be sure.

I do think it more likely we will be better off out, as I think the UK following an independent and outward looking global policy we will be able to adapt more quickly and positively to events. In the EU we are being slowed down and enchained by having to agree any response with 27 other differing and bickering countries.

Will China be the world’s largest economy in 2030, still growing well, or will there have been a China crisis as some fear? Will there be major new breakthroughs in technology, or will still be adapting and using the main internet, materials and biotechnologies we already know about?

These huge questions are difficult to forecast. Changing your assumptions about any of them can make a big difference to the results of the analysis.

It seems likely that if we leave the EU we can look forward to a better pay rise at the bottom end of the income scale than if we stay in. Lord Rose, the Chairman of Remain, said as much in a rare honest forecast from that campaign.

We will also have £10bn a year to spend at home that we have to give way to EU in contributions we don’t get back. This will enable us to hire more people for the NHS and schools who will tend to be better paid people with more skill.

There is also the stimulus effect of the first post Brexit budget, spending that money and removing VAT on fuel to boost people’s spending power.

Large companies who say they would rather we stay in have also usually said they will continue to invest here either way. Nissan, Toyota and Land Rover have no plans to pull out if we leave.

The UK is likely to enjoy a modest pay rise from leaving. Leaving will also cut some of the pressures on housing and public service. If house prices went up less or even got a bit cheaper, that would be great news for all those people under 40 who cannot afford a home of their own but would like one.

I am sure we will be a bit better off this decade from leaving. I have little idea how much better we will be by 2030. Nor can the Treasury, who had to make large revisions to this year’s forecasts between November and March publications.