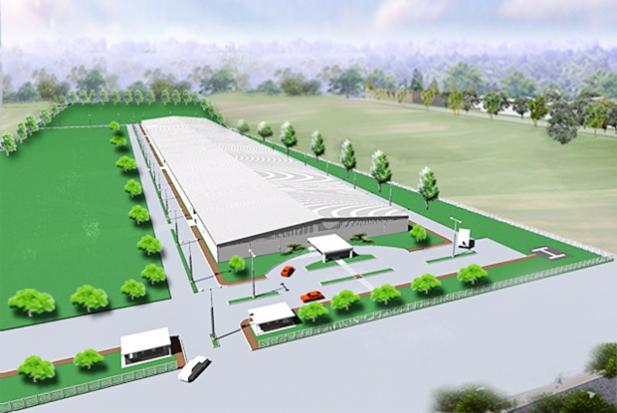 An artist’s impression of the third Minebea plant in Cambodia. (Photo supplied by the company via Khmer Times)

Minebea, the largest Japanese company in Cambodia, officially opened a third manufacturing plant in the Phnom Penh Special Economic Zone on Thursday to coincide with the fifth anniversary of its presence in the country.

Yoshihisa Kainuma, president and CEO of Mineba (Cambodia), told reporters at the opening ceremony that the company was able to expand in the Kingdom due to support by the government.

“All our goods manufactured in Cambodia are for export. Our main markets are in China, Japan, US and Europe – and these countries demand high quality products,” he said.

Koth Boran, a supervisor at Minebea (Cambodia), said the parent company in Japan had invested more than $50 million in the third factory.

He added that Minebea had created about 20,000 jobs at all levels with its three manufacturing plants operating in the country.

“Exports to China and Europe alone, from Cambodia, generate about $35 million to $40 million a month,” said Mr. Boran.

Yuriko Kishi of the Japan External Trade Organization told Khmer Times that Minebea is one of the biggest companies that “greatly contributes to economic growth in Cambodia.”

“As they bring in press machineries and could prove that value-added items can be produced in Cambodia in the near future, hopefully more Japanese investors would consider Cambodia as their next destination,” said Ms. Kishi.

“In 2011, the company started with an investment of $23 million and today its investment is about $250 million,” said Mr. Hun Sen.

“This shows the level of trust between both the company and the government.”

The premier added that Cambodia did not discriminate against any foreign investors and treats all of them equally.

“Foreigners can hold a 100 percent share in all investments,” said Mr. Hun Sen.

Mr. Kalyan urged the government to urgently look into improving logistics in the country so that manufacturers could better transport their products to the ports and airports for export overseas.

Get full Bangkok Post printed newspaper experience on your digital devices with Bangkok Post e-newspaper. Try it out, it’s totally free for 7 days.