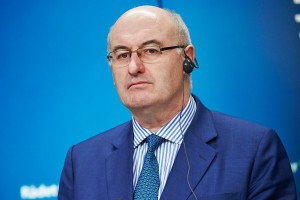 Overproduction of milk since EU quotas were abolished in April 2015 triggered a collapse in prices. The €500 million support package for EU farmers agreed in September was a step in the right direction, but the EU’s executive needs to come up with more measures and fresh money to help struggling farmers.

“The question is why the instruments undertaken have not given us the expected results,” said Chair of the Parliament’s Agriculture Committee Czesław Adam Siekierski during the debate in Strasbourg.

Siekierski, an EPP-affiliated Polish MEP (Polskie Stronnictwo Ludowe) said the EU has so far been unsuccessful in getting Russia to lift its embargo on imports of EU foodstuffs.

Meanwhile, global food prices fell by up to 19% last year, Argentina and Brazil are becoming big competitors thanks to deflation in those countries, and China and India now have a low demand for food imports. The situation is now becoming an existential threat for many farmers in the EU.

“Most farmers will be inclined to increase production. With these complex external factors, the instruments that we’re using as part of the safety net are not very effective,” the Polish MEP told parliament.

As many farmers no longer see a future for themselves in agriculture, this will lead to bigger farms taking over, escalating production and intensifying agricultural production. This will be the end of the European model of sustainable and environmentally-friendly agriculture, Siekierski stressed.

“There is a serious threat of renationalisation of what was quintessentially a European policy. The impact of the aid package which was paid out last autumn has been worn out.”

Hogan urged MEPs to give the aid package and other measures time to work before passing judgment.

The Commissioner said he was pushing, within the World Trade Organisation (WTO), for Russia to lift its ban on pig products, plus visiting countries including Colombia, Mexico, Kazakhstan, China and Japan to create new market opportunities.

He also wants to double state-aid ceilings to €15,000 per farm per year on a temporary basis to allow for greater flexibility for member states in supporting their farmers.

Many MEPs representing the far-left GUE/BGL party openly put the blame of the crisis at the feet of Hogan in the heated debate, saying the Commissioner has implemented policies in the agricultural market that caused dramatic consequences for European farmers.

“We are in a unique situation today whereby all the members in the parliament are in agreement about the crisis facing farmers. However, you, Commissioner, are failing to address it. While I can at least be thankful that we have moved from a situation of the Commissioner’s denial of any crisis to acceptance, the measures you have enacted do not go far enough,” said the Irish MEP Matt Carthy.

Hogan responded that he can only take action based on the framework laid out in the 2013 legislation agreed by the European Parliament and the Council which decided on the EU’s agricultural policies up until 2020.

“I am exhausting all the tools that have been given to me within the law and within the budget,” he said.