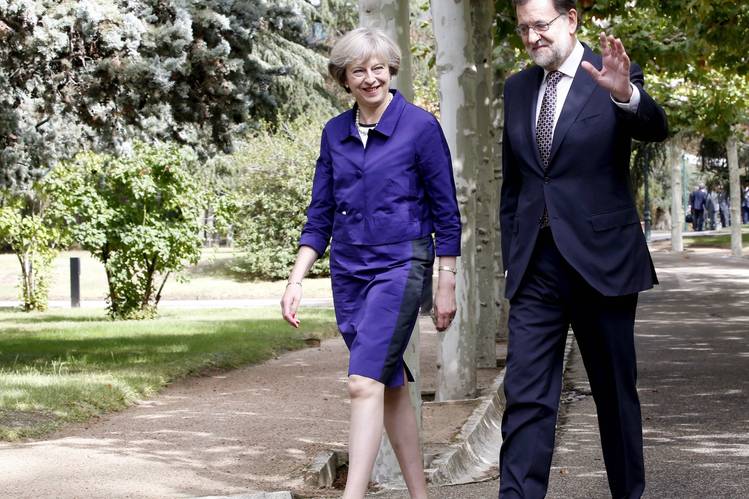 Theresa May’s counterparts in Europe are taking her at her word. And some of them are interpreting her word as signaling an inevitable hard break between the U.K. and the European Union.

That has prompted a noticeable toughening in tone from leaders on the other side of the English Channel. “In my opinion, the only real alternative to a Hard Brexit is no Brexit,” European Council President Donald Tusk said in Brussels on Thursday.

Yet if Mrs. May was preparing the ground for a Hard Brexit in her speeches last week to the Conservative Party conference, she also suggested an approach that could lessen shocks to U.K. businesses.

This was widely seen, including in Brussels, as a sign that Mrs. May has no intention of seeking membership in the EU’s single market after Brexit.

EU leaders and officials insist that any national limits on the number of EU workers in the U.K. would unreasonably restrict one of the so-called four freedoms—of labor, capital, goods and services—that make up the single market, and that those four freedoms are indivisible and nonnegotiable. Mrs. May can’t opt out of one freedom without being excluded from the other all elements of the single market.

It is true that the four freedoms are unevenly applied in the EU, particularly in many service industries where few seriously claim the single market exists. It is also a fact that some countries in the single market but outside the EU—tiny Liechtenstein, for example—have an annual cap on incoming EU migrants, an approach Mrs. May effectively ruled out by excluding the “Norway model.”

Other EU governments nevertheless have a strong political incentive not to be too generous to the U.K. In a note Thursday, Mujtaba Rahman of the Eurasia Group consulting firm wrote that the urge to punish the U.K. wasn’t score-settling but rather reflected the need to demonstrate that EU membership is “more beneficial than choosing to go it alone.”

For them it is unthinkable to let a country be in the single market while being free to ignoring the rulings of the institution that polices it, the ECJ.

Some EU officials also see Mrs. May as having ruled out a transitional arrangement—a kind of halfway house after Brexit aimed at softening the economic shock before the final divorce.

This interpretation derives from Ms. May’s announcement that the government will introduce a so-called Great Repeal Bill that, once passed, would annul the 1972 European Communities Act and convert the body of existing EU law into British law.

“This historic bill,” she said, “will mean that the 1972 Act, the legislation that gives direct effect to all EU law in Britain, will no longer apply from the date upon which we formally leave the European Union.” That date will likely be in the first half of 2019, after two years of negotiations.

If EU law won’t apply, then the U.K. can’t be in the single market after the formal Brexit date under any temporary arrangement, the argument goes.

This would simplify the exit negotiations. Although commission officials have drawn up 1,000 pages of possible negotiating snags—ranging from fishing rights to the completion of contracts—one EU official said Wednesday that the negotiations could be over in 9 to 12 months once properly under way in the fall.

Other officials are less sure that Mrs. May has ruled out any interim deal. British ministers repeat that they are still gathering information relating to British industries’ access to the EU, suggesting no final decisions have been made.

Whatever the final outcome, Mrs. May made clear that she was also sensitive to the economic shock of exit by taking the entire body of EU law into the U.K.’s own legal statutes. No other country has made such an extraordinary step.

For British-based companies, that would provide what she called “maximum certainty” over regulation after Brexit, and perhaps a soft transition to the new world. Over time, U.K. regulation would diverge from the EU as both sides pass new legislation and as British courts’ legal interpretations differ from those of the ECJ.

But this raises new questions. How would the EU treat an economy that has just left the bloc, but is implementing all existing EU regulations? Would the EU then impose its common external tariffs on Britain given the absence of precedent in the World Trade Organization on how to treat a country leaving a major trading bloc?

Even those in Brussels best informed on the negotiations say there are no clear-cut answers to these questions right now.