No one knows what happens after a Brexit vote on June 23 because it would be an unprecedented move.

Only semi-independent Greenland has quit the union and that was more than 30 years ago; it had a population of just 56,000 and the island isn’t even in Europe.

And despite negotiations surrounding one issue – fishing – the withdrawal process still took more than three years. 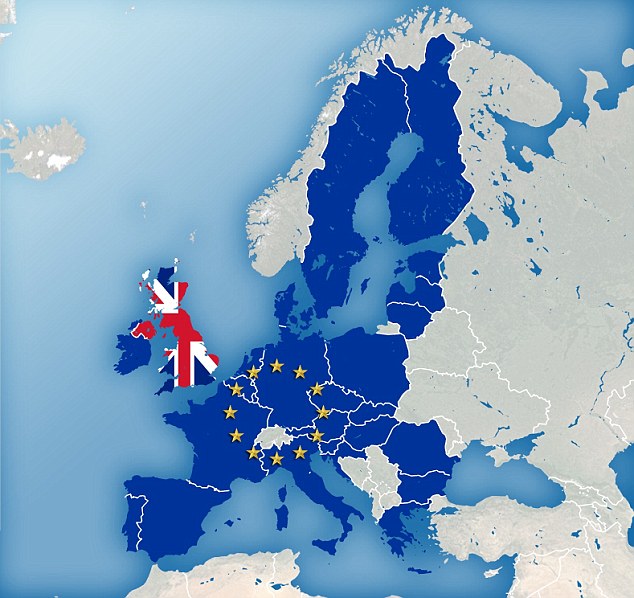 Britain would become the first fully-signed up member of the European Union to quit if voters back Brexit in the June 23 referendum. Only Greenland has left the union and that was more than 30 years ago, when the union was called the European Community

Until 2009 there were no official provisions set out for leaving the EU, but Article 50 of the Lisbon Treaty provided an outline for a withdrawal process.

There are also uncertainties over what happens if we stay, with the domestic politics of the Conservative party and David Cameron’s future as Prime Minister likely to take centre stage.

Here we sketch out what is likely to happen under the two possible outcomes of the June 23 referendum.

What happens if Britain votes to leave the EU on June 23? 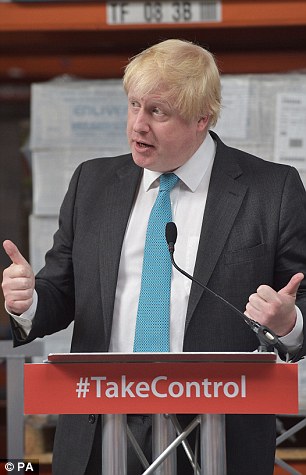 A Brexit vote would almost certainly lead to David Cameron resigning as Prime Minister, paving the way for Boris Johnson (pictured) to achieve his goal of taking over the top job

In the early hours of Friday morning a shattered and defeated David Cameron will appear outside Number 10 to concede the result.

He will have to outline the steps by which the UK withdraws from the EU. He is likely to announce to the nation he is triggering Article 50 of the Lisbon Treaty – the legal process for leaving the 28 nation bloc.

Once Article 50 is triggered, Britain will have two years to negotiate the terms of its exit from the EU and its new relationship with Brussels.

The UK will not officially cease being a member of the EU until it has agreed a new deal with the bloc or the two-year negotiating period is over – whichever comes first.

Cameron will almost certainly have to resign after a Brexit vote – he has insisted he will not quit but he said the same before the 2014 Scottish independence referendum but admitted he would have stood down after a No vote.

He would probably stay on in Number 10 until a swiftly-held Conservative leadership contest can be held – most likely to be won by leading Brexit campaigners like Boris Johnson or Michael Gove.

The leadership contest will give a platform to Johnson to lay out his plans for government, which will largely focus on his new points-based immigration policy and a battle plan for agreeing new trade deals with countries across the world.

At the same time as Cameron speaks from the steps of Downing Street, the EU President Donald Tusk will summon an emergency summit of all member states in Brussels – possibly as early as the June 25/26 weekend – a week earlier than the planned June European Council summit.

Meanwhile the financial institutions at home and abroad will move quickly to stave off economic chaos.

The Treasury, Bank of England and European Central Bank will activate contingency plans it has been quietly working on over the last few months – combating a fall in the value of the pound and a potential stock market crash.

A government document on the process for withdrawing from the EU published earlier this year said it could take up to a decade or more to negotiate our exit from the EU, our future arrangements with the bloc and to set up new trade deals with countries outside of the EU. 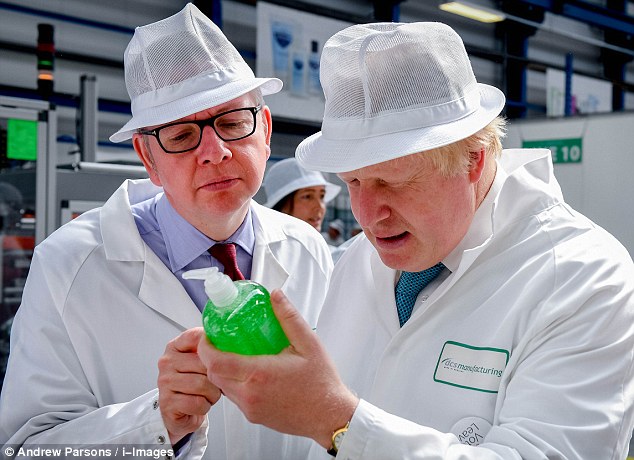 Considering the huge number of areas in which the EU operates, negotiations will involve thousands of officials taking up hundreds of office space as they hammer out new deals on everything from cross border security arrangements and access to EU-wide databases to access for UK citizens to the European Health Insurance card.

If no deal can be reached within two years of triggering Article 50, the UK will trade with the EU’s single market on World Trade Organisation terms, which are seen as the most basic trade arrangements and are used for the EU’s trade relationship with Russia.

At the same time as negotiations are ongoing with the EU, UK government officials will be seeking new trade deals with non-EU countries.

Currently the UK cannot negotiate its own free trade deals and must negotiate along with our fellow 27 EU member states.

But outside the EU, Britain will regain its seat at the World Trade Organisation, although world leaders – including US President Barack Obama – have warned Britain will be ‘at the back of the queue’ for new trade deals.

The new Prime Minister – likely to be Boris – will also have to forge a plan to unite the Tory party after months of bitter infighting.

He will have to hand several big jobs to pro-EU MPs and the likes of Theresa May and George Osborne are likely to continue in some capacity in the Government to give it at least some stability and continuity.

What happens if Britain votes to remain in the EU on June 23? 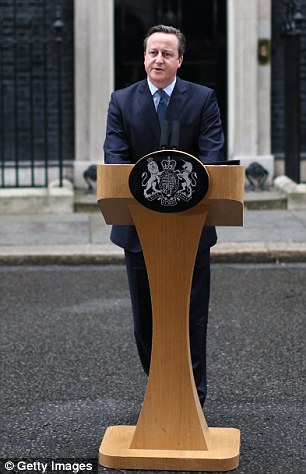 David Cameron will appear on the steps of Number 10 to declare victory and promise to get on with delivering his final reform agenda before he steps down ahead of the 2020 General Election.

The losing Eurosceptics will undoubtedly warn that MEPs and member states will try to water down the reforms that were agreed by the Prime Minister in February, but Cameron will head to Brussels for the European Council summit on June 28 to tell his counterparts not to mess around.

On the domestic front, Cameron could be forced to resign much sooner than he wants to and much will depend on the margin of victory. Backbench Tory MPs – angered at Cameron’s tactics during the campaign – have already signalled they will trigger a vote of no confidence in the Prime Minister after a win for Remain, which would hand Boris Johnson his long-awaited chance to run for the top job.

Installing a Brexit leader would also give the Tories a chance to unite after months of bitter infighting.

A small winning margin will give Brexit Tories enough to say they have nearly half of the country on their side and with Cameron already pledging to step down before the 2020 election, many in the party will not want a ‘lame duck’ Prime Minister in charge.

In the subsequent leadership contest it is likely that Tory MPs will nominate one Brexit MP and one pro-EU MP to put forward to battle it out for the party membership vote.

Many expect Johnson to go up against either George Osborne or Theresa May in the leadership contest, in which all the wounds of the bitter referendum campaign will continue to be torn open until a winner is declared – perhaps in time for the Conservative party conference at the start of October. 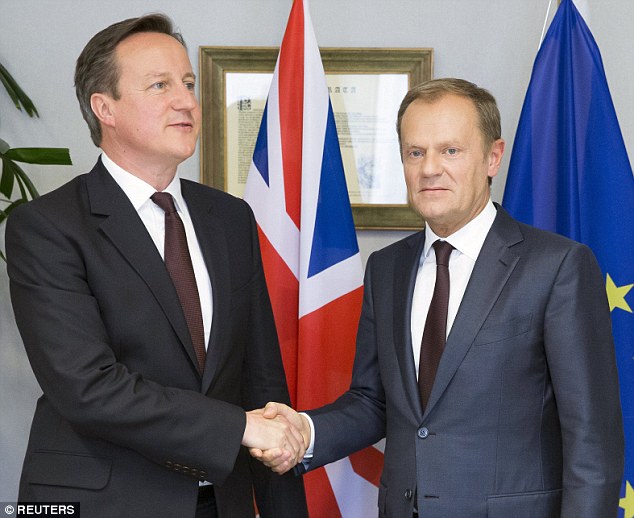 On the other hand, a double-digit win for Remain would give Cameron the impetus to continue in Number 10 and he could also take the wide margin of victory to carry out a purge of Brexit ministers.

He is likely to punish the most hostile of his frontbench team, with the likes of Employment minister Priti Patel and Defence minister Penny Mordaunt set to face the chop for directing heavy criticism at Cameron’s EU stance over the past weeks.

Cameron will demand the Brexit campaign accept that the question of Britain’s membership of the EU is over for a generation as he attempts to patch together a deeply divided party.

The vast majority of Eurosceptics in the party will probably rule the prospect of a second referendum as long as Cameron announces plans for a British bill of rights to replace the Human Rights Act, which binds Britain to rulings at the European Court on Human Rights – a separate body that is not part of the EU.

They will also demand a sovereignty bill that restores Britain’s supremacy over EU law.