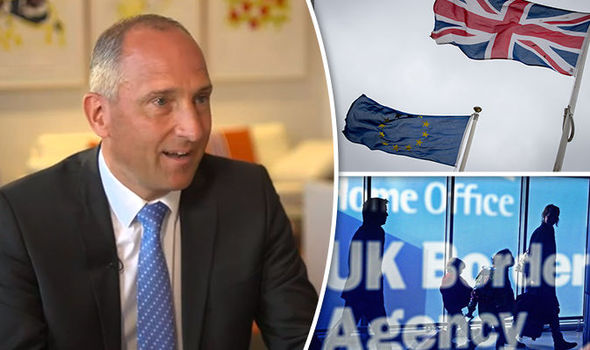 Mr Hasler claims free movement is crucial to the European Union and Britain will find it very hard to come to a trade agreement without it.

Liechtenstein’s PM shamelessly says it “wouldn’t be possible” for the UK to negotiate a deal for single market access without free movement of people – despite his country agreeing the exact deal 20 years ago.

The small landlocked principality negotiated entry into European Economic Area (EEA) – an organisation which bridges the gap between the European Free Trade Association and the EU – joining in May, 1995.

The micro state has a population of only 37,000 spread over an area of 61 square miles – less than half the area of the Isle of Wight.

It was agreed upon joining the EEA the country could easily become overpopulated if it was forced to operate within the EU’s desire for unrestricted free movement.

The EEA Council provided the principality a safeguard measure in the shape of Article 112 of the EEA Agreement – which is more popularly known as the “emergency brake” on immigration.

Despite Liechtenstein striking this particular deal over 20 years ago, the country’s current prime minister claims the EU would not be interested in the same deal today.

Speaking on BBC’s Newsnight he said: “I think nowadays it would be impossible for Liechtenstein to realise such a solution.

“Twenty years ago, it was different, but I think today negotiate such a solution it wouldn’t be possible.

“You see the discussion in Switzerland and also in the UK, free movement is one of the pillars of the EU and it’s quite difficult to special situations there.

“We only have 37,000 inhabitants, so it is really a small country and for that, we need the control of immigration.

“Without control, we have a lot of people – a lot of aliens here in Liechtenstein – and that would be a big problem for Liechtenstein.”

In July, European diplomats were understood to be looking at granting the “emergency brake” on EU migration for up to seven years following the British public’s vote for Brexit.

Conservative MPs were said to react furiously to EU leaders’ plans to curb migration into Britain as long as they stayed a part of the EU’s single market, which in turn requires the UK to make a sizeable contribution to the EU budget.

Britain is currently looking to Switzerland for advice as the country is being held to ransom by the EU over free movement.

According to an EU source, Brussels chiefs want to make an example of the Swiss ahead of tough Brexit negotiations.

After Britain’s decision to vote to leave the EU, Switzerland’s relationship with the EU has become more strained.

Some of Europe’s largest countries, including Germany, have demanded Britain respect the freedom of movement agreements in place inside the EU, if it wants to continue trading in the bloc.

But outgoing Ukip leader Nigel Farage, who played a major role in the Brexit campaign, has consistently stated he wants to see Britain leave the single market.

Speaking to Sky News he said: “I don’t think the Leave campaign in all its different fractures could have been clearer – we were voting to leave the single market, the customs union that is at the very heart of this political project.

“Absolutely and completely [it would be a betrayal].

“We voted to leave the political union – that means we leave the single market and we take back control of our borders, it’s quite simple really.”