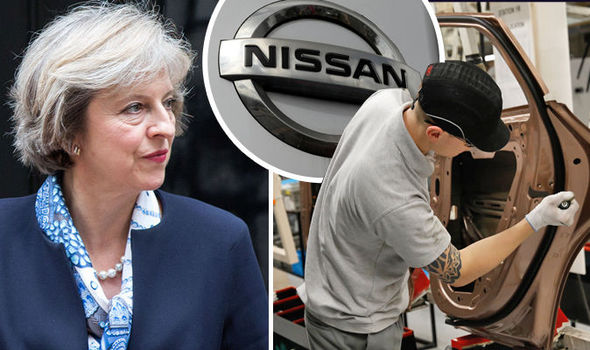 This week the car manufacturer refused to rule out moving its UK operations abroad if Britain goes for a “hard Brexit”.

But workers at its main Sunderland plant are not convinced that Nissan will make good on its claims.

One engineering consultant said: “It’s a bit of blackmail, really” while another worker claimed: “It’s just a chance to get a few quid out of the government.”

This comes after a group of senior Conservative MPs urged Theresa May to forget plans to delay Brexit in favour of a better deal for Britain.

The former Conservative ministers have called on the Prime Minister to forget Article 50’s two-year time limit in favour of a speedier Brexit.

Article 50 of the Lisbon treaty, the mechanism in place that allows nations to sever ties with Brussels, sets out a two-year time frame for leaving.

But the group of outspoken former Conservative ministers, led by John Redwood, believes Britain’s deals can be completed over a much shorter period.

Mr Redwood warned Number 10 not to allow tensions between Britain and the EU’s remaining member states get in the way of fulfilling June’s referendum result.

Setting out the group’s “Brexit Blueprint” he said: “It is in both sides’ interest to reach an earlier agreement to reduce business uncertainty.

“If there is a breakdown or no likelihood of agreement, then the UK should withdraw and after the two-year period the UK will be formally out. Trade will revert to World Trade Organisation rules.”

The Blueprint was put together by Mr Redwood along with Iain Duncan Smith, Owen Paterson, Peter Lilley and Sir William Cash at a private meeting in September.

They called on the government to be able to “scrap aspects of EU law not considered in the UK’s interests”.