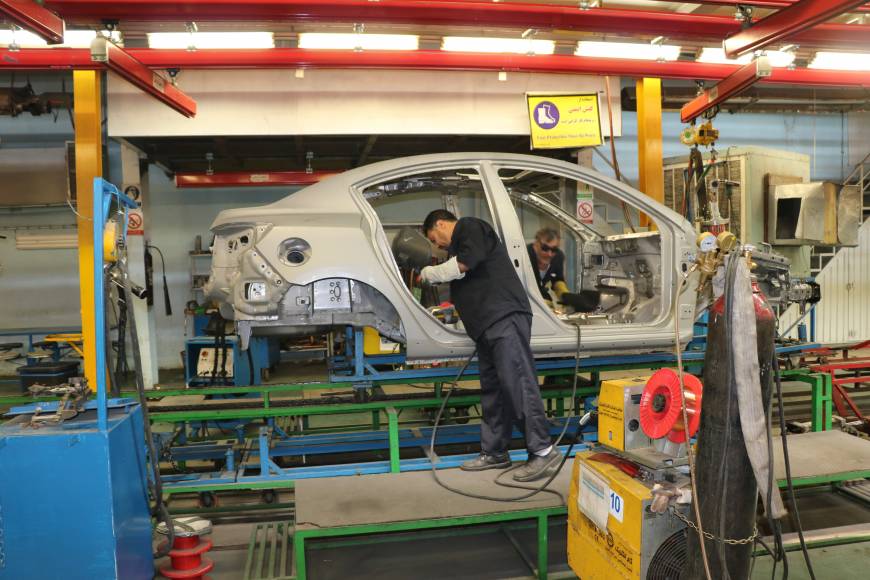 TEHRAN – Workers are busy fitting doors, hoods and other parts onto bodies as they assemble Mazda cars at a Bahman Group plant in an industrial zone in the western suburbs of Tehran.

The Bahman Group has been assembling the Mazda 3, known as the Axela in Japan, since 2007, with all the major components and technology provided by Japan’s Mazda Motor Corp. under the “complete knockdown” system.

The cooperation dates back to 1959, when the Bahman Group started assembling Mazda three-wheel pickups with a cargo capacity of 200 kg. The first Mazda vehicle the Bahman Group produced is displayed in front of the entrance of the plant office.

The Bahman Group, now the only private company in Iran’s automotive industry, hopes to expand cooperation with Japanese automakers further.

“We are looking for new partners. Daihatsu and Toyota could be one of the candidates,” said Mohammad Zarabian, Bahman Group vice president in charge of planning and development.

Iran’s auto industry is the second-biggest sector in the country following oil, and the biggest in the Middle East.

Iran’s auto market has been dominated by Iran Khodro and SAIPA, the two state-owned automakers, with their combined market share reaching 90 percent.

The Iranian government has an ambitious target of tripling auto production to 3 million vehicles by 2025. Under the plan, 2 million vehicles will be sold on the domestic market and the remaining 1 million will be exported to neighboring countries, including Iraq and Afghanistan.

Nader Sakha, chief executive officer of Crouse, which operates a plant in the industrial zone that produces wiring harnesses for automobiles, said Iran has good infrastructure for auto production. This includes the existence of many automotive parts makers, a well-educated workforce and better security compared with other countries in the region.

“We have enough potential here for others to come and start cooperation with Iranian companies,” he said.

Yoichi Yamamoto, adviser in charge of the Middle East at the Japan External Trade Organization in Tokyo, said automotive demand in Iran is seen as promising due to its population.

Iran has about 80 million people, of whom more than 40 percent are 24 years old or younger, according to the World Fact Book compiled by the U.S. Central Intelligence Agency.

“Iran is a country which has been already producing automobiles and is not an export market for completed cars,” said Yamamoto at the Middle East and Africa Division of JETRO’s Overseas Research Department. “In this sense, Iran would be a production foothold for the domestic market and its neighboring countries.”

The Japanese government lifted its sanctions on Iran in January and signed a bilateral investment pact in February in a bid to help Japanese companies do business amid intensifying global competition for access to the Iranian market.

Despite high expectations from Iranian automotive and auto parts makers, Japanese automakers seem to be slow in responding, due partly to such factors as lingering uncertainty over domestic politics and U.S. financial sanctions still in place.

The Bahman Group’s Zarabian echoed this view. “Unfortunately, the Japanese lose the market day by day,” he said, adding that it would be very difficult for Japanese automakers to recover market share if they do not dive into the market now.

If automakers find that they can procure high-quality parts in Iran in a timely manner it would facilitate their advance into the market, raising the quality and price competitiveness of their complete vehicles.

“If Japanese automakers take the leadership in next-generation automobile technologies, we do not need to be too worried that they may be left behind,” JETRO’s Yamamoto said.

Japanese automakers are now placing emphasis on the development of next-generation automobile technologies, including electric cars and those with automated driving.

Iranian Foreign Ministry spokesman Bahram Ghasemi said Japan has “a good standing in Iran” in public opinion polls and from a cultural point of view.

But there is no guarantee that Japan can maintain its position in Iran, and this will be up to its own efforts, he said.

“If some countries are going slowly, they cannot work with us. We can choose our partners,” he said. “In this good atmosphere after the nuclear agreement, if Japanese companies are not serious, they will be left behind in this competition.”