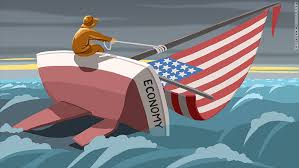 Doing so a few days after her Republican opponent Donald Trump, Democratic presidential candidate Hillary Clinton has now revealed her economic policy program. Both plans will try to create more jobs. But their plans—essentially tax reductions under Trump and tax hikes for the wealthy under Clinton—are too modest. America’s real problems will not be solved by these ideas.

The “New Economy:” Alone and Without a Safety Net

About a decade too late, the new economy is suddenly here. It has long been apparent that the digital economy with its prominent representatives, Apple, Google and Facebook, would ultimately supersede the old economy. This changing of the guard has been announced so often since the dot-com bubble that the actual transition has remained nearly unnoticed. But now the signs are unavoidable. Online goods providers, above all Amazon, have outpaced shopping centers like Macy’s and supermarket chains like Walmart. Both more than 300 years old, the former rivals Dupont and Dow Chemical are now joining forces to try and hinder the slow slide of the U.S. industrial giants. Their attempts will most likely fail.

The new economy has turned the job market inside-out. The discussion about the 1 percent versus the 99 percent has transformed into the digital divide. The creative technology elite profit from progress, which at one end creates short-term jobs with lower wages in positions where the introduction of robots or computers is (not yet) cheap or convenient enough: cleaning, cooking, nursing. On the other hand, job positions for the middle class are becoming fewer in number. An imbalance arises in the job market that is fundamentally more threatening for the economy and society than the simple unequal distribution of wealth and income.

Misguided free trade politics have caused American steel workers to lose their jobs, Trump claims in his economic speech once again. And, he promises, “We will put our coal miners and steelworkers back to work.” His solution: more protectionism. U.S. industry has definitively lost many jobs since China was inducted into the World Trade Organization in 2001. But the trend in the steel industry had already started in the 1960s, as revealed in a study by the economics professors Allan Collard-Wexler and Jan De Loecker.

Over the decades, the sector has lost 400,000 positions, while at the same time, steel production shrank only by about 20 percent. If the exodus of production into low wage countries had been the definitive cause, the drop would have been much more noticeable. More decisive for the loss of jobs was innovation. Steel plants began to recycle scrap metal. That was less labor intensive than producing completely new steel and one did not need the thousands of workers who had been previously employed in steel plants. The remaining job positions are actually better paid than job positions were earlier.

The problem is not only that well paying jobs like those of the steelworkers have become increasingly rare. The problem is that the American insurance plans have been primarily organized by the employer. This has historical origins. During World War II, the economy was dominated by a lack of workers, and companies wanted to retain employees by offering insurance benefits. Employees at larger companies were typically insured by the employer. Even pensions were expected to be paid for by the employer. Before the recession, the automobile manufacturer General Motors was also one of the biggest health insurers, under which more than a million employees, retirees and their dependents were insured. Health insurance could not be transferred to another employer. Therefore, the loss of a job also often meant loss of health insurance.

With pension plans, the employer also plays a much more important role than in Europe. Of course there is the national system of social security, but that only provides basic income. Until the 1980s, company pension funds often guaranteed a stable pension to their former employees. That changed with the introduction of the 401(k) savings plans, to which the employer provides a contribution, not a fully guaranteed pension, however. Therefore, the risk has increasingly shifted toward the employee. On top of that, this kind of pension plan can only be offered by larger companies with larger revenues. Those who work for small and mid-sized companies are often left to provide for themselves.

Under the new economy, the number of those who work for themselves or as subcontractors has drastically increased. Now younger workers combine several jobs in order to earn a decent income. The trend will become more stark, according to Bo Cutter, economics expert at the liberal Roosevelt Institute. “Individuals now have greater responsibility for managing insurance and pensions and balancing family care,” he wrote in an essay about the future of the American economy. The traditional social security plans are disappearing and new types are not replacing them. The health care reform initiated by President Obama was a first attempt to tackle this problem.

But “Obamacare” became politically toxic and offers an unhappy compromise. America has already pushed a comparable transformation through. At the beginning of the 20th century the country transformed itself from an agricultural nation to a land of mass production. That was not without its conflicts. In the Ludlow Massacre of 1914, John D. Rockefeller set armed men on a camp of striking miners; there were 26 deaths, 11 of them children. The growing power of unions and a boom in the U.S. economy after the world wars formed the precursors for new social structures and the growth of a broader middle class. Now America urgently needs a corresponding answer to the new economy.

Both candidates want to invest in infrastructure to create jobs. “We will build streets, bridges, tunnels, railroads and airports,” Clinton announced in her speech*. As president she will give them the luster with which they were built in previous generations. And there is certainly an enormous amount of repair needed. America’s highways, bridges, power plants and water works are crumbling considerably. According to the American Society of Civil Engineers, around $3.6 billion will be needed to restore infrastructure by 2020.

Reinvestment is so important that ultimately it comes down to the reproduction of the status quo again. But what America needs even more, as mentioned by Clinton only in a half sentence and not at all by Trump, is innovation in order to remain competitive internationally. If one looks at the iPhone, the rockets that Elon Musk wants to soon send in the direction of Mars, or the innovative cancer medicines that are coming onto the market almost monthly now, then the U.S. still appears to be the leader in research and development. But a collapse is looming. In comparison to other industrial countries, the portion of the gross domestic product that the U.S. spends is less than Korea, Israel or Japan. Even Germany lies, though barely, ahead of the United States.

Cuts with the Lawn Mower

Above all, the budgets for basic research, which is the seed for many companies’ later commercial successes, have been shrinking for years. Indeed, President Obama has voiced again and again how important these investments in the future are. But in wrangling with the opposition of the Republicans over the national budget, the funds for state-funded research centers saw the red pen. That American companies still continue to dominate in many high tech industries is often the result of the work by these national institutes.

One often-cited example is Google’s first algorithm, which was financed by the National Science Foundation. The national budget cuts could be more easily swallowed if private firms had not also cut back basic-level research. The research laboratory Bell, a division of the telecom giant AT&T, had reached iconic status at one point, achieving eight Nobel Prizes alone. The transistor, which rang in the electronic age, was developed there. But the managers today are measured by their actions toward short-term goals. Instead of research and development, billions of dollars are now flowing toward the purchase of company stock, which will drive up its market price—and the credibility of the managers.

Even in Silicon Valley, innovation can be mostly found in areas that promise quick profits. Nearly 40 percent of the capital from venture capital funds is flowing into software development. With a few inventive programmers, an app can be developed in a manageable time that can order food for delivery or have dirty socks picked up for washing. Far more difficult are the breakthroughs in alternative energy sources. It is not at all surprising that investors want to see results as much as possible within their lifetimes and would rather promote innovations that are less risky and capital intensive. What America is lacking are ideas that will not only repair the country but also transform it.

One Nation Stretched to Its Limits

The success of Trump, who speaks to the anger and frustration in a large part of the population, has surprised many Americans. It has mostly baffled the Americans on both coasts. It is the middle of the country that has suffered under the effects of deindustrialization. Desolate small towns, abandoned factories. A job as a security guard for minimum wage instead of one at the auto shop, a job at McDonald’s rather than the textile factory. America’s heartland, predominantly white, has experienced the destruction of families due to drugs, depression and suicide.

But instead of sympathy, those affected by the economic downturns have only garnered ridicule and disdain. They cling to their guns and religion, President Obama remarked in an off-the-cuff moment. An astounding opinion for a representative of a party that in the past has promoted social progress. But critics on the conservative side are not any less despicable. “The truth about these dysfunctional, downscale communities is that they deserve to die. Economically, they are negative assets. Morally, they are indefensible. Forget all your cheap theatrical Bruce Springsteen crap. Forget your sanctimony about struggling Rust Belt factory towns and your conspiracy theories about the wily Orientals stealing our jobs,” wrote the polemic Kevin Williamson in the National Review. According to him, Trump is like a drug for the lower class.

Desperation in the Heartland

It is legitimate to depict people in mobile homes as white trash. It’s true that the recession has affected minorities, blacks and Latinos considerably more. According to a new study, the average black family would need 288 years to close the gap between them and the living standards of the average white family household. That doesn’t make the desperation in the heartland any less real. And it is entirely true when people have the impression that they have been merely left to their own destinies. In 1980, the average income per person in Washington was 29 percent above the average income in the country. In 2013, the gap was at 68 percent, as reported by the political journal Washington Monthly.

Washington has not always ignored the middle. After the Great Depression, there was a series of development projects for rural regions, among them the Tennessee Valley Authority, which not only built dams and power networks, but also gave entire cities a boost. America can only be strong when it can successfully support the weaker parts of society. And a strong America is important for a strong Europe.