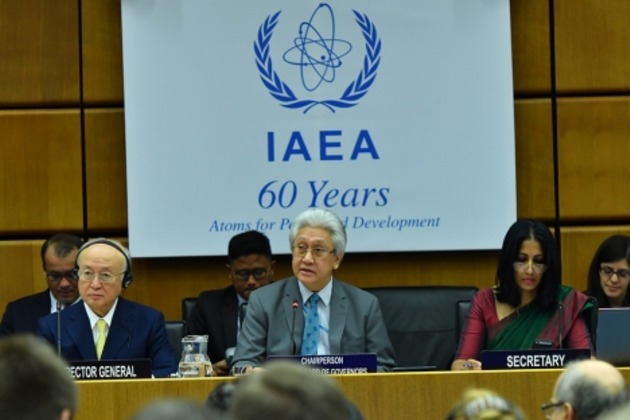 He said 579 new IAEA technical cooperation (TC) projects had been proposed for the next two-year cycle.

"We have worked very closely with Member States to develop the new programme," Mr Amano said. "The top three priority areas for Member States are health and nutrition, nuclear safety and security, and food and agriculture."

"We are working to take advantage of new opportunities for partnerships with other organizations under the Sustainable Development Goals framework, in order to increase the impact and effectiveness of the TC programme," he added.

Successful TC projects highlighted in his statement included the eradication of the Mediterranean Fruit Fly in the Dominican Republic and assistance provided to Jordan to successfully control the same pest; improved soil and water management practices, using isotopic techniques, to improve crop productivity in Sudan and reduce soil loss in Morocco; and, in Mauritania and Benin, improved livestock productivity through cross-breeding programmes and artificial insemination using nuclear-derived techniques.

In Romania, the Agency is helping to establish a national dosimetry audit system that will improve safety for patients undergoing radiotherapy or nuclear medical procedures. It is also supporting the establishment of a brachytherapy programme for gynaecological tumours in Guatemala.

The Director General said the modernisation of the IAEA nuclear applications laboratories in Seibersdorf, near Vienna, was progressing well under the ReNuAL (Renovation of the Nuclear Applications Laboratories) project. The eight laboratories carry out pioneering work related to human and animal health, food security and safety, agriculture, and environmental monitoring and provide extensive assistance to Member States.

"This is one of the most important projects ever undertaken by the Agency," Mr Amano said.

Another area noted by Mr Amano was the successful support provided to African countries by the Joint FAO/IAEA Division's veterinary diagnostic laboratory network, VETLAB, during recent outbreaks of avian influenza.

Mr Amano welcomed the strong interest being shown by Member States in the Ministerial Conference on Nuclear Science and Technology to be hosted in Vienna from 28 to 30 November 2018.

Mr Amano briefed the Board on the IAEA International Ministerial Conference on Nuclear Power in the 21st Century, which took place in the United Arab Emirates last month. He had informed the Conference that "substantial growth in the use of nuclear energy will be needed if countries are to meet the climate change goals they set themselves under the Paris Agreement."

"This was echoed by many participants," he added.

Mr Amano said the Low Enriched Uranium (LEU) procurement process was at a very advanced stage. The IAEA will issue a Request for Proposal in the coming days.

The IAEA LEU Bank, owned and controlled by the IAEA, will host a reserve of LEU and act as a supplier of last resort for Member States in case the supply of LEU to a nuclear power plant is disrupted due to exceptional circumstances and the Member State is unable to secure LEU from the commercial market or by any other means. The LEU Bank is located at the Ulba Metallurgical Plant in Oskemen, Kazakhstan.

Mr Amano welcomed the increased interest among Member States in the IAEA's peer review and advisory services in nuclear safety and security. An Integrated Review Service for Radioactive Waste and Spent Fuel Management, Decommissioning and Remediation mission was hosted in Poland in October. "This was the first time that this service, known as ARTEMIS, has been requested by an EU Member State to fulfil its obligations under the European Council Waste Directive," he said.

Verification and Monitoring in Iran

Mr Amano updated the Board on his visit to Iran in October. In his discussions with President Rouhani and other government leaders, he stressed the importance of Iran's implementation of its commitments under the Joint Comprehensive Plan of Action (JCPOA). "I also encouraged Iran to ratify the Additional Protocol to its Safeguards Agreement, which it is provisionally applying at present," he added.

The Director General's latest report on Verification and monitoring in the Islamic Republic of Iran in light of United Nations Security Council resolution 2231 shows that the Agency continues to verify and monitor Iran's implementation of its nuclear-related commitments under the JCPOA. "The nuclear-related commitments undertaken by Iran are being implemented," Mr Amano said.

"The Agency continues to verify the non-diversion of nuclear material declared by Iran under its Safeguards Agreement," he added. "Evaluations regarding the absence of undeclared nuclear material and activities in Iran continue. As of today, the Agency has had access to all the locations that we needed to visit."

Mr Amano reiterated his serious concern about the nuclear programme of the Democratic People's Republic of Korea (DPRK). He called upon the DPRK to fully comply with its obligations under UN Security Council resolutions and to resolve all outstanding issues, including those that have arisen during the absence of Agency inspectors from the country. "The Agency maintains its readiness to play an essential role in verifying the DPRK's nuclear programme," he noted.

As far as safeguards implementation in the Syrian Arab Republic is concerned, Mr Amano said that the IAEA's assessment remained that it was very likely that a building destroyed at the Dair Alzour site in 2007 was a nuclear reactor that should have been declared to the Agency by Syria under its Safeguards Agreement. He renewed his call on Syria to cooperate fully with the Agency in connection with all unresolved issues.