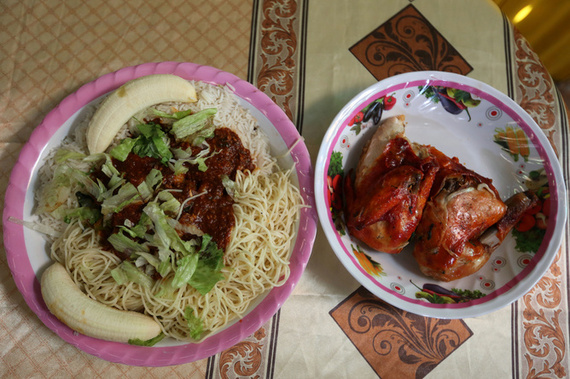 As the movement of people across the world creates more multicultural societies, can trade help communities maintain their identity? This is the question at the heart of a concept known as “food sovereignty”.

Food sovereignty has been defined as “the right of peoples to healthy and culturally appropriate food produced through ecologically sound and sustainable methods” and, critically, the ability of people to own their food systems.

Culturally appropriate food refers to the cuisine eaten by a certain group, which reflects their own values, norms, religion and preferences. It is usually dynamic and may change over time.

In my journey across different food landscapes, I have discovered that people consume food not just to satisfy hunger but for cultural, religious, and social reasons. And I have learnt that there are ways that international trade can help facilitate this.

My journey was shaped by my experiences examining the preferences of people from Afro-Caribbean descent, South Asians and Chinese people in the Greater Toronto Area of Canada.

The Chinese have a huge palate for bok choy, chinese eggplant, and gailan (also known as Chinese broccoli). South Asians love okra, bitter melon and eggplant. People of African descents tend to love okra and amaranth (a leafy green vegetable), at times substituting the latter with spinach because of scarcity.

The interesting thing about these groups is that they share a lot of food in common, though the preparation may differ.

This makes sense: o of my main findings has been that everyone’s cuisine has been affected by migration and trade. This pattern is ever more pronounced in the contemporary world, as people explore and learn from other cultures by including other food traditions in their own cuisine.

The integration of cultures does not negate culturally appropriate food, it enriches it. London’s curries are a result of migration, and in Nairobi the inclusion of channa (chickpea) and chapati (flatbread) in the diet is a result of the Indians trading and settling in the region.

Cultural groups have different definitions of good or appropriate food. The elite (who can afford it) and people who are environmentally conscious, for instance, believe in organic or local produce; Jews eat kosher food; and Muslims eat halal.

The challenge lies with making sure food is appropriately labelled – as organic, local, kosher or halal – and the key here is the authenticity of the certification process.

It can be quite difficult to trace the origin of certain foods, whether they’re produced locally or internationally. This educates consumers, allowing them to make the right choice. But it may be an additional cost for farmers, so there is little incentive to label.

The case for transparency and authentication

To ensure that trade allows people to have access to authentic and culturally appropriate food, I recommend a new, digitised process called “crypto-labelling”. Crypto-labelling would use secure communication technology to create a record which traces the history of a particular food from the farm to grocery stores. It would mean consistent records, no duplication, a certification registry, and easy traceability.

Crypto-labelling would ensure transparency in the certification process for niche markets, such as halal, kosher and organic. It allows people who don’t know or trust each other to develop a dependable relationship based on a particular commodity.

If somebody produces organic amaranth in Cotonou, Benin, for instance, and labels it with a digital code that anyone can easily understand, then a family in another country can have access to the desired food throughout the year.

This initiative, which should be based on the blockchain technology behind Bitcoin, can be managed by consumer or producer cooperatives. On the consumer end, all that’s required is a smartphone to scan and read the crypto-labels.

The adoption of blockchain technology in the agricultural sector can help African countries “leapfrog” to the fourth industrial revolution.

Leapfrogging happens when developing countries skip an already outmoded technology that’s widely used in the developed world and embrace a newer one instead. In the early 2000s, for instance, households with no landline became households with more than two mobile phones. This enabled the advent of a new platform for mobile banking in Kenya and Somalia.

Similarly, crypto-labelling will lead to a form of “electronic agriculture” which will make it cheaper in the long run to label and enhance traceability. With access to mobile technology increasing globally, it’s a feasible system for the developing world.

The right kind of trade

But using digital platforms to enhance food sovereignty is only plausible if international trade is not disruptive.

This is not the case now. A whole roasted turkey and condensed milk are cheaper in Hillacondji (Benin Republic) and SanveeCondji (Togo) than they are in Europe because of what economists call “dumping” – when a product is cheaper in a foreign market than in the domestic market.

Because of the low cost of imported products, local farmers in these francophone West African countries simply cannot compete. There’s no incentive to produce locally if you won’t recoup the cost of production.

In theory, it’s desirable for these to import such products because they are so inexpensive. But in practice, food sovereignty is compromised once a country needs to import staple foods that could easily be produced domestically.

Local production guarantees food safety if consumers purchase directly from farmers or through community shared agriculture. It promotes healthy eating, especially for perishable foods, that lose quality as a result of long-distance travel. It also strengthens the local economy through creation of employment and value-added products.

La Via Campesina, the international peasant’s movement interested in the welfare of farmers, wants the World Trade Organisation (WTO) to stop interfering with agriculture. But it is possible for the WTO to develop processes and procedures that will facilitate trade in Africa, based on its Trade Facilitation Agreement.

The WTO should also support developing countries in protecting their farmers, reusing seeds, and developing indigenous knowledge. Trade should not tamper with farmers’ right to plant what they want, when they want.

Africa has been trading with different parts of the world for centuries, as reflected in the continent’s diverse diet. The national cuisine of the Somalis, for instance, is influenced by India, (because of the Indian Ocean trade); the Arabian Peninsula (Arab immigrants kept coming in different waves and in the process exchanges of ideas, culture and commodities took place); Ethiopia (because of trade caravan networks); and Italy (because it colonised Somalia for half a century, from 1889 to 1936).

The same thing is seen among the Swahili people of the Kenyan and Tanzanian coastal areas. There, trade has flourished for centuries, enriching the food sovereignty of several countries in Africa – that is, until multilateral organisations started performing experiments with uncertain outcomes.

I have enjoyed palm wine and pounded yam with egusi soup with a farmer called Adedeji in Ile-Ife; asked for more ugali and hot nyama choma in Nairobi while hanging out with two researchers of food and agricultural development, Makau and Magomere.

And as empirical evidence for showing food travels across borders, I have eaten kisra and okra in Edmonton with the Abibakris, a Sudanese family.

During this journey, I realised that food sovereignty is intertwined and we have a lot more in common than we tend to acknowledge. Of course food sovereignty and international trade can coexist – as long as the private sector is socially responsible and governments develop appropriate policies.

This article was originally published on The Conversation. Read the original article.