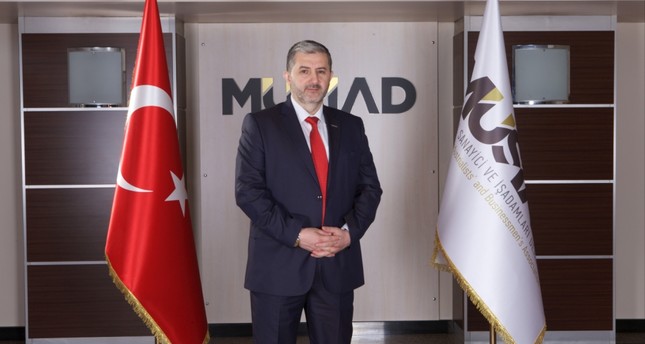 One of the points President Recep Tayyip Erdoğan emphasizes most in his meetings with businesspeople is the burden of high interest rates that impede the competitiveness of investors in the international market due to high loan costs. In an effort to alleviate and eliminate the burden of high investment costs ensuing from interest rates that hover around 20 percent in Turkey, the country's leading business nongovernmental organization, the Independent Businessmen and Industrialists Association (MÜSİAD), has developed an alternative model of financing which they call "people-oriented" finance. This model basically calls for both conventional and participation banks, which barely include people in the process of investments, to take part in the country's industrial projects by way of multi-partnered funds allocating finance to investors and then sharing the profits of investments.In an exclusive interview with Daily Sabah, MÜSİAD Chair Abdurrahman Kaan elaborated on the organization's projects to better utilize Turkey's financial system in a mobilization effort to boost investments, trade and exports. Prioritizing production economics in their analysis and projects, Kaan said, MÜSİAD concludes that interest rates are the biggest obstacles hindering investments in a sustainable growth environment. "Therefore, we have put a lot of labor into creating financing models that excludes interest-rates. No matter what the scale of investments, this interest-free model paves the way for investors to become partners in investment projects, contribute to economic growth by financing projects and accelerate social development in the long run," Kaan said.

This alternative model of financing has so far produced three multi-partnered funds, including a venture capital fund, agricultural investment fund and a real estate investment fund. The next step, Kaan emphasized, is to draw both conventional and participation banks into these funds to finance projects. "It is necessary to include banks in investment projects, partner them with investors and distribute profits. This model will decrease the demand in interest, thus will reduce the cost of investments." For this model to work, MÜSİAD Chair Kaan underscored both conventional and participation banks must allocate a portion of their deposits to these projects. He noted that if 10 percent of the total TL 2 trillion ($533 billion) deposited in accounts, which corresponds to TL 200 billion, is allocated to investments projects, the deposits would be mobilized for business and trade operations.

"The reason why we are emphasizing this model is the high interest rates that reach 20 percent and create extra investment costs for businesspeople, and these extra burdens impede competitive capacity of our businesses in the international market." MÜSİAD believes that the current system excludes the human factor in project financing as the money held in savings account is only used in the system as loans without any return on the holder except for the interest rate, but a people-oriented approach will involve more partners in investment projects and a fairer allocation of profits.

When the dependence of economic operation on interest rates is reduced, he said, the profitability of enterprises will increase and new investments will follow. "The system that we have developed is not based on interest rates but relies on a profit-oriented economy. With this model, which we can call an economy of equities, income generated by production, namely, more effective distribution of profits and its recycling into the economy, will be ensured," Kaan underscored.

Kaan said that MÜSİAD's venture capital fund project has made significant process, and it aims to finance initiatives and ideas that have a growing potential by way of the partnership model.

The firm perception of "indispensability of interest rates" for the operation of the economy is hard to break, but the development of projects will contribute to change the dominant position of interest rates in investment financing. Regardless of the vast amount of financial resources of business, it is not possible for them to finance all their investment projects, thus, they resort to bank loans, Kaan pointed out. He explained that small and medium sized enterprises (SMEs) that make up almost 99.8 percent of the total number of enterprises in Turkey have difficulty in financing their investment via their equity since the current system requires vast interest expenses and lowers the profitability rates of businesses.MÜSİAD's Africa Year to boost Turkey's projects

Declaring 2018 "Africa Year," MÜSİAD has accelerated its organizational operations on the continent. "Currently, we have branches in Nigeria, Niger, Sudan, Ivory Coast and Senegal, and we aim to establish agencies in Ethiopia, Ghana, Uganda, Tanzania and Kenya," Kaan said.

The chairman emphatically stressed that MÜSİAD will actively partake in the General Directorate of Agricultural Enterprises' (TİGEM) project to carry out production development operations on an area of 12,500 hectares. "We are planning to participate in every stage of the agricultural investments from production to packaging and sales."

An area of 780,000 hectares was allocated for Turkish investors, and 12,000 hectares of this land will initially have TİGEM as a pilot project. Following the results of this project, more Turkish businesspeople are expected to flock to the region. In addition to utilizing production opportunities in the country, Turkish investors will have the chance to export their products to other African countries on Atlantic Ocean coasts via railways that are being constructed from the port of Sudan to the inner parts of the continent.

"Sudan's positive approach to Turkey clearly demonstrates that it has chosen Turkey as a partner. Thus, our businesspeople and MÜSİAD members who are currently running businesses in the region will more easily continue their operations," Kaan said.Aside from agricultural projects, MÜSİAD is also preparing a culture and trade center in Sudan. The center is currently in the blueprint stage, but it aims to make investors shop owners in the country through a multi-partnered system. The center will not only present Turkish products, but it will be a venue to expose and introduce Turkish culture to the whole continent.A project to make industrialists shop owners

Elaborating on prospective projects to expand industrial growth and significantly contribute to value-added products by building industrial zones in 81 provinces in Turkey for middle-sized industrialists, Kaan said the project, named the Industrial Zone Development Administration (TOSİ) by the organization, constitutes one of the essential parts of the growth-based production strategy. He added that the NGO is carrying out the necessary negotiations to prepare the legal infrastructure of a TOSİ project that has been working on for three years.

"Industrial enterprises in Turkey carry out their production operations in small industrial zones, and they cannot move to organized industrial zones that have shops of 3,000 square meters due to the lack of financial means. But the environment affects the production and sometimes lowers production rates. The idea that inspired this project was to expand the production areas. TOSİ will provide enterprises that are stuck between small industrial sites and huge organized industrial zones with alternative areas, and the project will be led by the Housing Development Administration (TOKİ), and a production campus, which will accommodate houses, a vocational school and health institution, will be built," according to Kaan. Moreover, the financing of the project will be similar to TOKİ's system. Shop owners on small industrial sites will be provided interest-free loans, say, for 10 years, and they will repay the loan in installments every month like rent. At the end of the period, they will have their own shops in a more favorable production space.

MÜSİAD was the first business organization to voice its support for Turkey's Operation Olive Branch into northwestern Syria's Afrin region to eliminate threats by the PKK terrorist organization's Syrian affiliate, the Democratic Union Party (PYD) and its armed Peoples' Protection Units (YPG). Their statement was later followed by other business NGOs in Turkey and soothed the markets on the first trading day, which was reflected in the soaring stock market and spiking Turkish lira.

With regard to the businesspeople's forecasts for Turkey's Afrin offensive, MÜSİAD Chair Kaan highlighted that businesspeople expect normalization in Syria after the second half of the year after the Afrin operation.

"Normalization will offer new opportunities for the reconstruction of Syria and Iraq as well as the development of logistical facilities," Kaan said, adding that for Turkish businesspeople, stability in Iraq and Syria will create a domino effect for the entire region, particularly southeastern Turkey by connecting the entire region to the Gulf through highway projects that extend into Qatar.

Kaan added that MÜSİAD, in addition to Africa, will focus on developing markets in the Gulf and Asia-Pacific, particularly Indonesia and Malaysia. The organization plans to develop market specific projects to handle the requirements and needs of each market.Professional support for professional youth

MÜSİAD has been the leading professional NGO paving the way for young people with high entrepreneurship spirit. To that end, another NGO, Young MÜSİAD, was established in 2002 within MÜSİAD's body to offer a separate platform for entrepreneurial youth.

Young MÜSİAD organizes a biennial event, the International Young Business People Congress (UGİK), and the sixth UGİK is scheduled for April 2018. The congress provides a platform where experienced and successful businesspeople share their journeys with youths and answer their questions.

"It is important for us to see young Turkish people gather under MÜSİAD because bringing together the dynamic spirit and courage of our young people with the experience and knowledge of businesspeople creates a very powerful energy," Kaan said, adding that young entrepreneurs obtain the skill to predict potential risks and take precautions, while professional young people benefit from the dynamic spirit of young people.