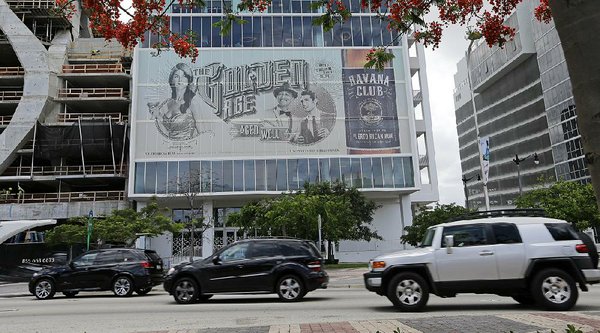 MIAMI — With his tuxedo loosened and her dress slightly askew, the couple unwinding with cocktails in a new U.S. ad for Bacardi’s Havana Club evokes the openness and decadence of pre-revolution Cuba that many exiles have longed for.

The fresh marketing campaigns for the two brands are the latest escalation in the liquor industry giants’ 20-year fight to secure the exclusive right to sell Havana Club throughout the U.S. when the half-century-old embargo on Cuban goods ends.

Both Bacardi and Pernod Ricard hope to capitalize on consumers’ growing appreciation for premium rums, as well as U.S. excitement for easier travel to Cuba and its once-forbidden rum and cigars. Similar disputes typically are resolved by establishing who registered first, but this case is complicated and has been defined by bitterness between Cuba’s government and exiles.

After President Barack Obama announced a detente in December 2014, Pernod Ricard’s chairman and chief executive officer said the thaw was good news for Cubans and Americans, and the company hopes to finally sell its Havana Club in the United States. Bacardi, privately held by its founding Cuban family, still seeks the rights to its own name in Cuba, a trademark it lost to Fidel Castro’s government.

U.S. rum sales generated $2.3 billion in revenue for distillers last year, and premium brands meant for sipping are gaining on popular flavored and spiced rums, according to figures from the Distilled Spirits Council of the United States.

Bacardi produces its rums in Puerto Rico and Mexico, but the company argues that it’s been supplying the U.S. with Cuban rum for over a century.

Bacardi bought the name and a distillation formula handwritten from memory by the Arechabala family, which created the brand in Cuba in 1934 but lost control to Castro’s government in 1960. The company’s filings in federal lawsuits and trademark board appeals bristle with indignation while describing Castro’s troops forcibly confiscating the Arechabalas’ office property.

“I remember him in particular saying that it was important that we were going to help this family so that all of their assets were not taken outside of Cuba,” Wilson said in an interview in Bacardi’s suburban Miami offices.

In court documents, Bacardi describes the rum produced by its competitor as “ersatz Havana Club.” Pernod Ricard’s general counsel, Ian FitzSimons, scoffed at Bacardi’s labeling of rum distilled in Puerto Rico as Cuban in any way.

Pernod Ricard is investing $90 million over the next few years to expand its operations in Cuba in preparation for the opening of the U.S. market, said Havana Club CEO Jerome Cottin-Bizonne.

U.S. courts generally have ruled against Cuba in this case, but the island’s government pursued renewal for its Havana Club registration, arguing that if the U.S. could not renew the trademark, it also couldn’t cancel it under the embargo.

In spite of decades of icy relations, the U.S. Patent and Trademark Office appeals board regularly declined Bacardi’s request to have Cuba’s registration canceled, saying it lacked the authority to answer Bacardi’s politically charged complaints.

In its response to Bacardi’s latest legal challenge, Pernod Ricard and the Cuban government say the U.S. trademark for Havana Club had been abandoned by its originators after Cuba “assumed managerial control” of the Arechabalas’ company.

Bacardi ultimately lost its claim to the Havana Club trademark in Spain after lengthy litigation there. The World Trade Organization also has sided with Cuba, saying the U.S. violates multilateral trade rules with its regulations for cases involving assets seized by the island’s government.

None of that matters, Wilson said, because only two companies run by the two Cuban families have ever sold rum labeled Havana Club in the U.S.

“Regardless of what happened with the registration, we have the common-law rights. Cuba doesn’t,” Wilson said.