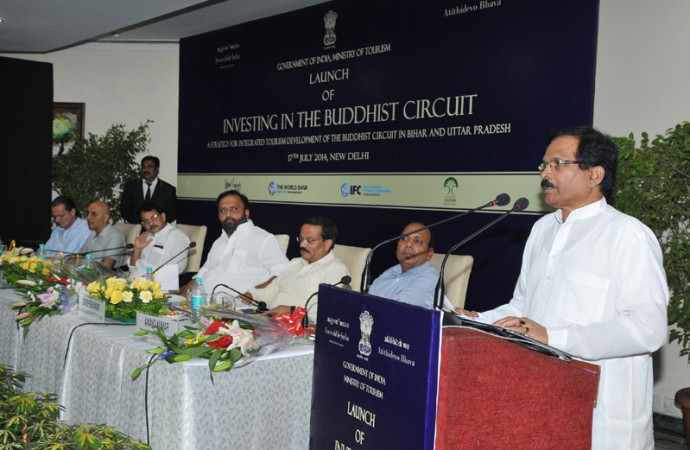 Union Minister of State for Culture and Tourism, Shripad Yesso Naik addressing at the launch of programme, ‘Investing in Buddhist Circuit,’ in New Delhi on 17 July, 2014. (a file photo)PIB

India has now eyed its unexplored tourism sector, including its medical tourism, to reap economic benefits.

The Central Government on Wednesday, 6 August, announced to give more thrust to promote its tourist spots like Taj Mahal in international travel fairs. Tourism accounts for 6.6 per cent of the country’s GDP as per the World Travel & Tourism Council.

Union Minister of State for Culture and Tourism Shripad Yesso Naik told the Rajya Sabha that his ministry will promote various Indian tourism destinations and products in global markets, under the “Incredible India” brand-line.

The promotional campaign includes annual releases of print, electronic, online and outdoor media campaigns in the overseas markets, he added.

“In addition, a series of promotional activities are being undertaken in major tourist-generating markets overseas through India Tourism Offices overseas with the objective of showcasing India’s tourism potential and promoting tourism,” of India, the Minister said.

Several promotional activities listed out by Naik for tourism development such as participation in travel fairs and exhibitions, organising road shows, “Know India” seminars and workshops, organising and supporting Indian food and cultural festivals. Others include publication of brochures, inviting media personalities, tour operators and opinion makers to visit the country under the hospitality programme of the ministry.

Road shows are being organised in important and potential source markets overseas jointly with trade associations to promote tourism to the country. Such road shows have been organised in USA, Eastern Europe and China during the current financial year.

With the objective of attracting Buddhist tourists from all over the world, the Ministry is organising an International Buddhist Conclave in Bodhgaya and Sarnath from 26-28 September this year, Naik explained.

The third annual International Travel Mart (ITM) will be held at Shillong, Meghalaya in October to promote tourism from world over to the North Eastern region. It was earlier organised in Assam and Arunachal Pradesh.

Regarding foreign tourists’ perception about India in the context of growing assaults on women, Naik said, travel advisories are issued by various countries from time to time, advising their citizens to avoid travel or to take precautions while travelling to other countries.

“Following some cases of harassment of women tourists in India, a few countries including USA, Canada, Australia, New Zealand, Germany and France have advised women tourists to exercise caution while travelling in India, particularly alone and at night,” the minister said.