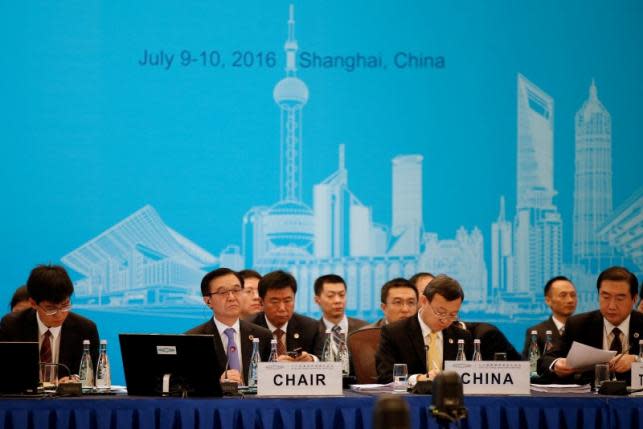 Gao made the remarks at the start of a two-day meeting of trade ministers from G20 economies in Shanghai, as uncertainty hangs over the outlook for a slow-growing global economy now beset by post-Brexit reverberations.

“Global trade is dithering, international investment has yet to recover to levels before the financial crisis, the global economy has yet to find the propulsion for strong and sustainable growth.

“In the current circumstances, the international community expects the G20 to show leadership in resolving the prominent problems we are facing and inject impetus for recovery and growth,” he said.

In April, the International Monetary Fund cut its 2016 global growth forecast for the fourth time in a year, to 3.2 percent from 3.4 percent, amid weakening global demand and geopolitical risks. A fifth straight global growth markdown by the IMF looks almost certain.

The World Trade Organization (WTO) expects 2016 to be the fifth consecutive year of less than 3 percent growth in global trade, and Director-General Roberto Azevedo said on Friday trade would remain sluggish going into the third quarter of the year.

The ministers meeting in Shanghai were likely to agree to a set of non-binding principles to enhance investment as well as a declaration on protectionism, South Africa’s Minister for Trade and Industry Rob Davies told Reuters.

“The bigger context of course is there has been a very sharp reduction in trade growth,” he said. “We heard from the WTO today that it has been well below the rates of GDP growth, which are in any case fairly depressed.”

The spectre of protectionism also hangs over the meetings in Shanghai.

China’s huge but struggling steel sector has relied on exports to offset the impact of slowing domestic demand, but it has been accused of using unfair pricing to push foreign competitors out of business.

Chinese trade officials have repeatedly stressed that the country has been the victim of overzealous anti-dumping actions by foreign countries, which fail to take into account Chinese efficiency or its low labour and production costs.

Davies said ministers had not yet reached consensus on how to handle overcapacity and rising protectionism in the steel sector, which remains a “contested space”.

“It’s not that it is not important, but a number of us don’t feel a comprehensive discussion has taken place … A lot of the European countries and the United States want to see something, but what exactly is going to be said is still an issue.”

Uncertainty over Britain’s vote to leave the European Union will dampen near-term economic growth for Britain and the rest of Europe and will affect output globally, according to the IMF.

British and EU representatives in Shanghai on Saturday were at pains to stress that they would come up with a “sensible and mature new arrangement”, Davies said.