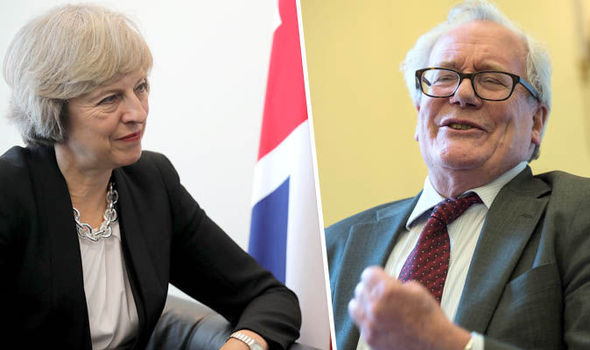 Patrick Minford, who helped craft areas of Mrs Thatcher’s economic policy during the 1980s, is backing a “full Brexit” in the wake of Britain’s historic vote to quit the EU on June 23.

The Cardiff University academic argued no exit deal at all with the EU, while “simply leaving for unilateral free trade” outside of the bloc’s Single Market, would be the best Brexit result for the UK economy.

Professor Minford, an ex-Treasury adviser, spoke at a lunch where he launched his new publication titled ‘Trading Places: Consumers v Producers in the New Brexit Economy’.

A long-time supporter of Britain cutting its ties with Brussels, Prof. Minford suggested the Prime Minister sets a three-month deadline for the EU to agree a Brexit deal with the UK once Article 50 – the leaving mechanism of the EU’s Lisbon Treaty – is triggered.

It is widely-expected Mrs May will invoke Article 50 early next year.

Prof. Minford, a member of the Economists for Brexit group, said Mrs May should also be prepared to tell remaining EU member states “we don’t care” if no agreement is reached.

In his new publication, written for the Politeia thinktank, Prof. Minford outlined how a “clean departure” from the EU can be reached to the benefit of the UK economy.

He wrote: “The only way to achieve the objectives that were voted for in the Brexit referendum is for the UK to go for a clean break with the EU and trade with the EU outside the Single Market.”

Prof. Minford said such trade would occur under World Trade Organisation (WTO) rules and “unilateral free trade with all countries including the EU”.

The economist described the EU referendum as “a battle” between companies and British households, who had suffered from higher prices as a result of EU membership.

He said: “Essentially what happened in the Brexit referendum was that for once those consumers were able to examine the whole EU package.”

Despite the Brexit result, Prof. Minford warned companies “have continued to fight back” by arguing Britain can remain a member of the Single Market by achieving a deal with the rest of the EU.

Prof. Minford claimed “it is hard to see how that agreement could be achieved” with Britain liable to “waste much time trying and get nowhere, at great cost to the economy” in failing to deliver new policy.

Prof. Minford added: “There is a further clinching argument for not wasting time on any such ‘deal’: it will not make us better off than simply leaving for unilateral free trade (with all including the EU), our own regulations and migration controls, with no deal at all – call it a ‘full Brexit’.”

Prof. Minford also described a “Project Fear mark two” in the wake of the Leave vote, as part of “a strong attempt by the Remain camp to argue against the result” by forecasting “short run chaos due to the strong negative short run Brexit shock”.

But pointing to positive economic news since the referendum, Prof. Minford wrote: “For politicians, politically motivated forecasters and for media, there are some risks in participating in Project Fear mark two.

“If the economy proceeds as normal, people will rumble more lies; they will also punish actions that seemed designed to harm the economy by ‘talking it down’.

“My advice to officials and media is to avoid this Project. Heed the fate of so many of the perpetrators of Project Fear mark one.”

Prof. Minford dismissed the concerns of UK manufacturers in facing tariffs outside of the Single Market, claiming such costs are “not very large” and British companies “could be compensated for this”.

He said “other potential costs” on eurozone bailouts, sluggish economic growth and “the threat of sometime joining the euro” could harm Britain by remaining part-linked to the bloc.

Having highlighted voters’ ‘red lines’ of Brexit in wanting control over the UK’s border and laws, Prof. Minford said: “The only way to achieve the objectives that were voted for in the Brexit referendum is for the UK to go for a clean break with the EU and trade with the EU outside the Single Market under WTO rules and unilateral free trade.

“This break can be achieved rapidly by using the 1972 European Communities Act to tidy up the post-Brexit regulative order, then abolishing it; at the same time invoking Article 50 swiftly and settling uncontroversial non-trade issues quickly.”

By being prepared to leave the Single Market, Prof. Minford claimed there is no “necessary” agreement between Britain and the EU on trade, regulations or immigration.

He said “swift” agreement could then be reached on “uncontroversial” issues such as “the rights of existing foreign residents (which must be respected under all civilised norms), intercountry cooperation on terrorism and foreign policy, no-visa agreements and a miscellany of other matters”.

Prof. Minford argued: “We simply ‘walk away’ into a trading world governed by WTO rules, with a UK governed by our own democratic laws.”