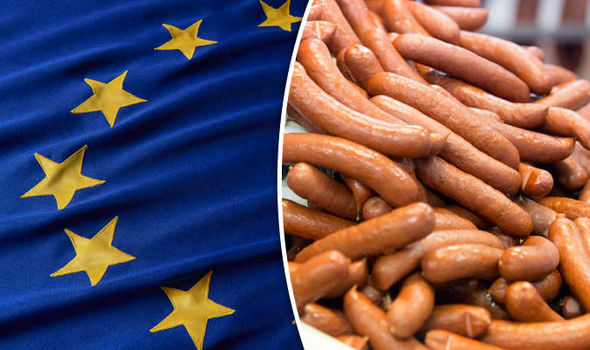 With just under a week to go, the German trade organisation Jungen Unternehmer has been canvassing in London against Brexit and are demanding the EU take action.

The organisation has started a ‘Bratwurst against Brexit’ campaign calling for the UK to stay in the EU and for the 28-country bloc to be reformed.

They have even been handing out the much-loved German Bratwursts to show what delicious meat the Britain could lose.

Federal chairman of the Jungen Unternehmern Hubertus Porschen said: “We don’t want the British to have to go without German Bratwursts in the future. That’s why we canvas with charm and mustard to get the British to stay in the EU.

“The EU referendum is crucial to the future build of Europe. Should a Brexit happen, Europe would lose some of its competitiveness.

“The EU would then be dominated by countries that stand more for protectionism and centralisation rather than competition and free trade. Especially Germany would have a lot to lose.”

The group has admitted that the EU needs to be reformed and changes need to be made.

The organisation said: “The British thinking is exactly right: the EU needs to be renewed. No matter what the outcome of the referendum will be, all of Europe will have a lot of work to do. The EU desperately needs reforms, an #EUpgrade’.”

The group has recently published the book ’Statt Brexit: #EUpgrade, in which they demand that the EU should be reformed fundamentally to stay economically attractive and viable.

This campaign comes as this week’s edition of the German news magazine Der Spiegel begs Britain to stay in the EU.

The title reads ‘Please don’t go!’ with an article title about why Germany need the British.