Tens of thousands of people are dying of hunger in the area of west Africa where Boko Haram militants are active, the United Nations humanitarian co-ordinator for the region, said during a news conference on Friday.

About 65,000 people are in a "catastrophe" or "Phase 5" situation, according to an assessment by the Integrated Food Security Phase Classification (IPC), the recognized system for declaring famines.

Phase 5 applies when, even with humanitarian assistance, "starvation, death and destitution" are evident.

"The tragedy of using the F word is that when you apply it, it's too late," said Toby Lanzer, who has also worked in South Sudan, Darfur and Chechnya.

'I had never gone to places that had adults who were so depleted of energy that they could barely walk.' - UN aid worker Toby Lanzer

Boko Haram militants have killed about 15,000 people and displaced more than two million in a seven-year insurgency, and they still launch deadly attacks despite having been pushed out of the vast swathes of territory they controlled in 2014.

"This is the first time I've come across people talking about phase 5. The reason for that was simply a lack of access. We couldn't get to places," Lanzer said.

"Because of the insecurity sown almost exclusively by Boko Haram, people have missed three planting seasons."

Asked if it was safe to assume that tens of thousands of people were dying, Lanzer said: "It's not what we're assuming, it's what the IPC states. And I back that number.

"I can tell you from my first trip outside (the regional capital) Maiduguri, I had never gone to places that had adults who were so depleted of energy that they could barely walk."

One aid agency reported back from the Nigerian town of Bama that its staff had counted the graves of about 430 children who had died of hunger in the past few weeks, Lanzer said. 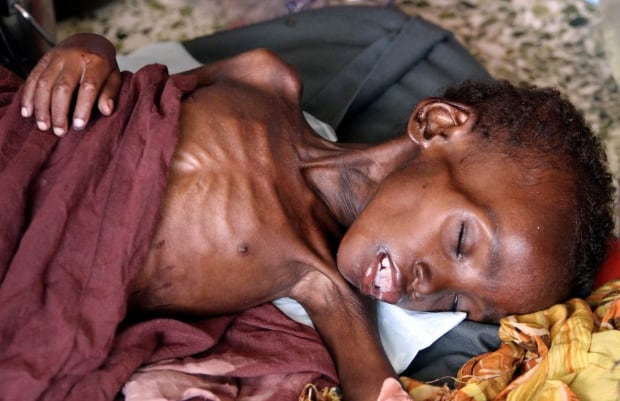 A malnourished child sleeps inside a ward at Banadir hospital in Somalia's capital Mogadishu. Boko Haram militants have killed about 15,000 people and displaced more than two million in a seven-year insurgency. (Feisal Omar/Reuters)

With millions more short of food in northern Nigerian and regions of the adjoining countries, the situation could get much worse, and could turn into the "biggest crisis facing any of us anywhere", he said.

"We're now talking about 568,000 across the Lake Chad basin who are severely malnourished, 400,000 of them are in the northeast of Nigeria," Lanzer said.

"We know that over the next 12 months, 75,000, maybe as many as 80,000, children will die in the northeast of Nigeria, unless we can reach them with specialised therapeutic food."

Across the Lake Chad region, more than six million people are described as "severely food insecure," including 4.5 million in Nigeria, he said.