After a two-month decline, exports grew by 4.62 per cent to $22.9 billion in September; this is the second time in 22 months that exports registered monthly growth 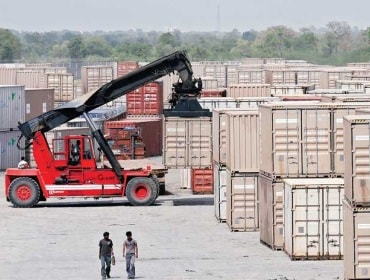 Merchandise export rose 4.6 per cent in September, only the second occasion in the 22 months since December 2014 of a monthly rise.

Export rose to $22.9 billion in September, against $21.9 billion in the corresponding period last year. In August, export was down by a marginal 0.3 per cent.

Cumulative export for April-September, first six months of financial year 2016-17, was $131.4 billion, compared with $133.7 billion for the corresponding period in FY16.

The commerce ministry noted that apart from Japan, where export rose 1.9 per cent, many major economies (America at minus 6.4 per cent, European Union at minus 8.4 per cent, China at minus 4.4 per cent) were experiencing falling export, according to World Trade Organization data for July.

Apart from a global slowing in merchandise trade, the extended fall is blamed on a commodity price crash and sluggishness in the Chinese economy, among others.

India’s import, however, continued to see decline, by 2.5 per cent to $31.2 billion in September, compared with the year-ago period when it was $32 billion. Cumulative import in the first six months of this financial year reached $174.4 billion, compared with $202.3 billion the previous year.

Among major export items, outbound trade fell in 13, against 16 in August. Export of engineering goods, which made a comeback in the growth charts in August, rose 6.4 per cent. That of drugs and pharmaceuticals rose 0.9 per cent, after a rise of 0.7 per cent in August, following months of fall. On the other hand, petroleum products continued to fall, by 1.4 per cent, albeit much lower than the 14.1 per cent slide in August.

Non-oil and non-gold import, taken as a proxy for industrial demand, continued to decline and at a higher pace of 3.05 per cent, reaching $22.5 billion in September from $23.4 billion a year before. It had declined by 1.5 per cent in August.

Gold import continued to fall by a large margin for an eighth month in a row, down 10.3 per cent to $1.8 billion, compared to $2 billion a year before. The yellow metal’s price had fallen a massive 77.5 per cent in August.

If the recent fall in gold prices, ahead of the festive season, triggers a revival in its import, the current account deficit in the second half of FY17 could be much larger than in the first half, said Nayar of Icra.

The cumulative deficit in merchandise trade for the current financial year’s first six months is $43 billion. This is about a third lower than the figure for the corresponding period in FY16, of $68.5 billion.