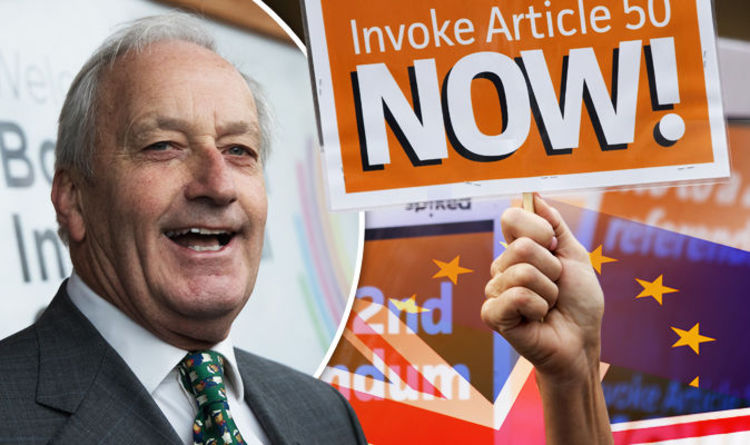 Talking exclusively to the Express.co.uk, the Welsh Ukip leader argued that the will of the 17.4million Britons who voted to leave the bureaucratic Brussels bloc must be respected.

Mr Hamilton said: “Brexit has already been decided upon by the British people, the only thing that now needs to be decided upon is the terms of any trade deal we do with the EU.

“I see no reason why we don’t just get on with it now. Nothing works better than a deadline to make people get on with things.”

The former Tory MP also attacked MPs who were unwilling to accept the decision made by voters on June 23.

Mr Hamilton said: “We are leaving the EU, that’s the decision that has been made, it doesn’t depend on any further vote of Parliament except the votes that will be required to repeal the European Communities Act which provides the legal basis for membership.

“But the referendum result must be treated as binding because that’s the decision that has been taken by the British people.”

The 67-year-old also labelled talk of a hard or soft Brexit as “meaningless” and that retaining access to the single market in its current form was “not possible” as it would involve the free movement of people.

Mr Hamilton said: “The British people voted to leave overwhelmingly because they wanted our Government to be in control of our borders. If it had not been for the immigration issue we probably would not have voted to leave the EU.

“There must be control of our borders, which means we can’t be part of the the single market. We can’t have a Norway style model. We are going to have to negotiate a free trade model like the one the EU agreed with South Korea in 2013.

The Ukip AM himself has advocated the need for a free trade deal with the rest of Europe – and that the Brussels bloc would be worse off if they did not agree to our terms.

“We have a £40billion deficit with Germany alone. They sell us 820,000 cars a year, I don’t think the German car industry would be terribly pleased with Angela Merkel if she fails to negotiate a free trade deal on cars.

“Brexit is Brexit. All they are talking about is how free the trade deal is going to be which we are able to negotiate with the EU that is going to be put in place after we leave.

“If we don’t do a deal then we have the fallback position as members of the World Trade Organisation (WTO). The average tariff on goods is around the world is about four or five per cent. Overall, its not a big issue. The talk of hard of soft Brexit is merely some kind of smokescreen by the Remoaners.”