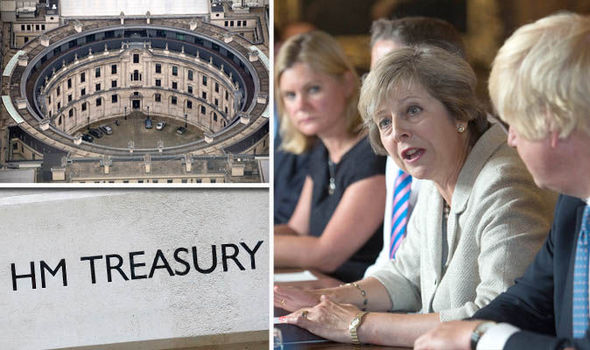 Cabinet ministers have been handed Brexit warnings based on Treasury forecasts, it has emerged

Leaked draft papers have revealed Cabinet ministers are being told tax revenues could plummet by £66billion a year if the UK opts for a ‘hard’ Brexit.

The documents, prepared for Cabinet committee discussions, warn Britain’s GDP could fall by as much as 9.5 per cent if the country leaves the EU without securing a trading agreement with the bloc.

The revelation Whitehall is continuing to pump out the same ‘Project Fear’ message officials produced before the EU referendum has sparked fury among Brexit campaigners.

Patrick Minford, a former economic adviser to Margaret Thatcher, hit out at the “outrageous” Brexit warnings being produced on the basis of Treasury estimates, which he suggested is stuffed full of officials who don’t want Britain to quit the EU.

The Cardiff University academic told Express.co.uk: “The Treasury is acting as a sort of fifth column in the Government.”

The leaked forecasts are understood to be based on the same controversial Treasury study into the impact of Brexit its officials produced in April under ex-Chancellor George Osborne – the architect of the Remain camp’s ‘Project Fear’ scaremongering.

Professor Minford said it was “outrageous” the Treasury had “learnt nothing from its mistakes” earlier in the year, as he pointed out how their April study had “already been shown to be complete nonsense”.

He pointed out how the Treasury’s growth forecasts included in their pre-referendum estimates had already been proved wrong, while they had also based their figures on “arbitrary uncertainty effects which had no basis”.

At the end of last month, GDP growth in the second quarter of 2016 – the period straddling the June 23 referendum – was was revised upwards, suggesting the economy has been largely unaffected by the Brexit vote.

Professor Minford, a member of the Economists for Brexit group, said: “Their forecast has been completely disproved and they should be hanging their heads in shame, not going back to this completely discredited forecast.”

The ex-Treasury adviser said he expects the UK economy to “grow substantially in the third quarter” when figures are published later this year. 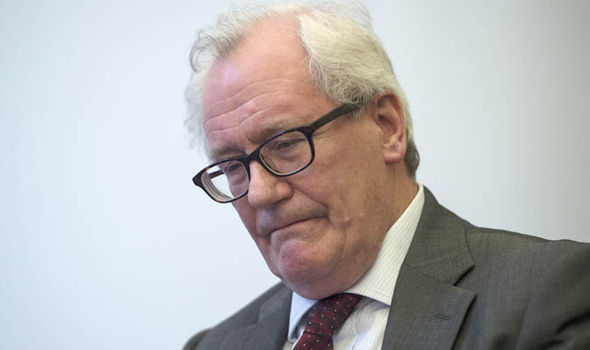 Professor Minford criticised the Treasury’s “completely absurd assumption”, included in its April study, that Britain would continue with the same level of trade tariffs it places on non-EU countries once it leaves the bloc.

“So what are the Treasury doing assuming that we will have protectionism against both the EU and the rest of the world?”

The economist insisted “the whole point in leaving the EU is to get rid of this protection”.

Professor Minford, who helped craft areas of Mrs Thatcher’s economic policy during the 1980s, suggested the Treasury could face action if they continue to base forecasts on their pre-referendum studies.

He said: “Now that they’ve been proved wrong by events, they should be revising these reports, not carrying on producing the same discredited message. It’s outrageous.

“If they continue with this, there’s going to have to be an inquiry into how the Treasury can persist in these outrageous pieces of analysis that have been discredited and are at variance with Government policy as well.”

Senior Brexit ministers are reported to have protested against the leaked Cabinet committee document, seen by The Times, which they said was “withdrawn from reality”.

According to the newspaper, the ministers accused the Treasury of “trying to make the single market look bad”.

The worst warnings included in the papers are believed to be based on Britain leaving the EU’s single market and relying on World Trade Organisation (WTO) rules for trading with the bloc.

The £66billion shortfall in tax revenue is the equivalent to nearly two-thirds the annual budget of NHS England.

Commenting on the leaked documents earlier, ex-Cabinet minister Owen Paterson said: “There are still elements of the Remain campaign churning out their almost comical gloomy forecasts.”

Remain supporters demonstrate during the March for Europe rally in Parliament Square, London

Leaving the single market has been dubbed ‘hard’ Brexit by pro-EU campaigners.

EU bosses have consistently warned maintaining membership of the single market will force Britain to remain signed up to the bloc’s freedom of movement rules and possibly continue contributions to the Brussels budget.

A Government spokesman said: “We want the best outcome for Britain.

”That means pursuing a bespoke arrangement which gives British companies the maximum freedom to trade with and operate in the single market, and enables us to decide for ourselves how we control immigration.”