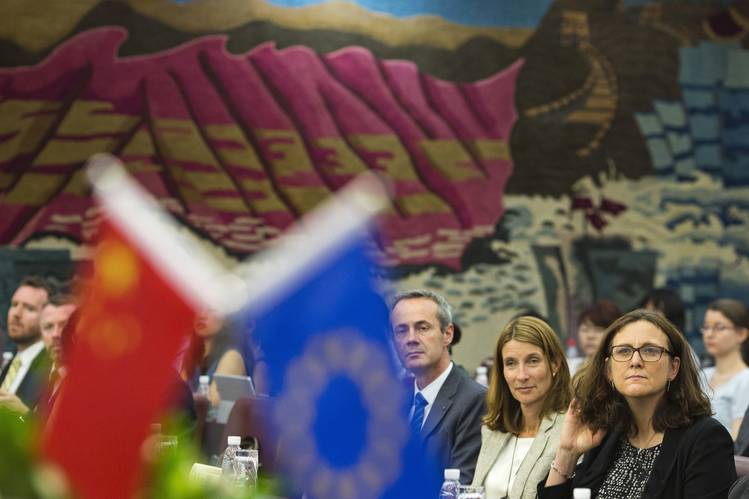 EU trade chief Cecilia Malmstrom, right, prepares to speak at the University of International Business and Economics in Beijing on July 11.

BRUSSELS—The European Commission said Wednesday it was working on a proposal to treat China in the same way as industrialized economies in trade disputes while strengthening its trade defenses to better protect European Union industry from unfair trade practices.

Beijing says a 2001 agreement allowing it to join the World Trade Organization means it should receive market-economy status from the commission by Dec. 11, a move that would reduce the EU’s leeway in protecting its industries from imports from China sold at below-market prices.

But European industry leaders say China uses government subsidies to boost exports and undercut overseas competition. They say its economy is still controlled by the state, and governments must take that into consideration when weighing whether or not to award it market status.

The commission is aiming to sidestep the question of market-economy status and strike a compromise that would address the concerns of industry and skeptical EU countries, while also abiding with what it says are its international legal commitments. The new plan would allow for high tariffs to be imposed on imports deemed to be priced below international-market levels and accelerate anti-dumping procedures, the commission said.

The discussion “is about how to adapt our trade-defense instruments to deal with the realities of overcapacity and a changing international legal framework,” said European Commission Vice President Jyrki Katainen. The commission will make a formal proposal later this year. The European Parliament and EU governments must approve it.

EU governments remain divided on the matter. Nations from Europe’s south, such as Italy, support a tougher approach to China. But free-trade champions such as the Nordic countries are more likely to back awarding China the coveted status, arguing it could open the door for Beijing to inject more money into Europe’s stagnant economy, a move that would boost infrastructure investment and jobs.

The debate on how to treat China has been further complicated by the situation in Europe’s struggling steel industry, which is reeling from global overcapacity.

The new methodology proposed Wednesday would take into account international prices in disputes against all WTO members, and lead to approximately the same level of anti-dumping duties as exist today, said Cecilia Malmstrom, the EU’s trade chief.

She added that the existing list of nonmarket economies would be eliminated.

To boost its trade defenses, the commission said it wants to make anti-dumping cases even shorter, from nine to seven months, and to suspend, in certain cases, the so-called lesser duty rule, which only allows the EU to levy tariffs on imports at a rate sufficient to level the playing field between the price of imported goods and their domestically produced counterpart.

Industry reaction was muted, with some saying they needed to see more detail.

Gerd Götz, director general of European Aluminium, which represents the European aluminum industry, said the commission wasn’t clear on how its new proposal would be applied “nor how effective it will be.”