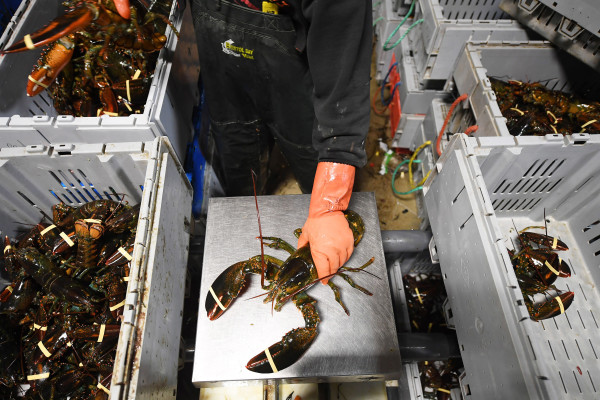 Every year, millions of dollars worth of Maine lobsters end up on European dinner plates. That figure could plummet if the European Union votes next spring to ban importing live North American lobsters.

This week, the EU took a step closer to banning live American and Canadian lobsters as an invasive species and, thus, a threat to the native species of the crustacean in the North and Baltic seas. Sweden raised the alarm about importing live lobsters after 30 rogue North American lobsters were discovered off their shores, likely having escaped from nearby storage pounds or been freed by animal-rights activists.

“During this process, the [EU] will be considering all information submitted by the U.S. and Canadian authorities,” Enrico Brivio, EU spokesman for the environment, maritime affairs and fisheries, said Wednesday in an email. “The implications for international trade and for the economic operators as well as alternative means to achieve the objective of biodiversity protection will be also duly considered by the [EU] before any decision is made.”

Maine’s congressional delegation, united in its support of the state’s lobster industry, released a rare joint statement on Wednesday calling the invasive species panel’s decision “deeply disappointing.” Sens. Susan Collins and Angus King and Reps. Chellie Pingree and Bruce Poliquin said there is no scientific justification for banning the importation of live lobsters.

“We continue to believe that pursuing such a prohibition is not only unsupported by science and inconsistent with the rules of the World Trade Organization, but is also an unnecessary overreaction that would have devastating economic effects on the American lobster industry that supports so many Mainers and their families,” the congressional delegation said. Their statement added that the EU has not yet weighed ”economic factors.”

Brivio said the earliest that a ban could be approved is next spring.

Maine is estimated to export about $10 million worth of live lobster directly to Europe each year and, just last year, shipped $5.6 million worth to Italy alone, according to data compiled by the U.S. Department of Commerce. ( China, by comparison, imported $11.5 million worth of Maine lobster in 2015, federal statistics indicate.)

Additional Maine-caught lobster likely is shipped to Europe via Canada, which last year imported $290 million worth of live Maine lobsters. Likewise Maine, whose lobster industry has a highly reciprocal relationship with its Canadian counterpart, last year imported $180 million worth of lobster from Canada. The ban in Europe would apply to all live lobsters exported from either country.

Overall, more than $495 million worth of lobster was harvested last year in Maine, the nation’s leading lobster producer. Of that total, $331 million worth ended up being consumed abroad, according to the Department of Commerce. Much of the lobster exported to Europe is shipped during the Christmas holiday season, when seafood consumption on the continent soars.

“The [Maine Lobstermen’s Association] is deeply grateful for the efforts of Maine’s congressional delegation on behalf of Maine’s lobster industry,” Patrice McCarron, Maine Lobstermen’s Association’s executive director, said Wednesday in a prepared statement. “This issue could have significant impact on our industry, and we are glad that our elected officials are willing to see this through to World Trade Organization if necessary.”

The European controversy marks the second time in four years that Maine lobsters have run into foreign opposition.

In 2012, when Maine’s lobster harvest was so abundant that dockside prices plummeted to historic lows, Canadian lobstermen blockaded processing facilities in New Brunswick from taking deliveries from Maine. That conflict simmered down about a week later when a Canadian judge ordered the angry Canadians to let the deliveries from Maine through.