The EU will challenge a World Trade Organization (WTO) ruling that claims Airbus has been illegally subsidized from member states, undermining competition with Boeing.

The European Commission appealed the WTO decision on Thursday.

The WTO is also expected to rule over a counter-allegation from the EU that the US government has been illegally subsidizing Boeing.

On September 22, the WTO said the EU has failed since 2011 to end support and subsidies for Airbus, which Boeing estimated to be to the tune of €20 bn, mostly in the form of “soft loans.”

“We have long maintained that EU aircraft subsidies have cost American companies tens of billions of dollars in lost revenue,” US Trade Representative Michael Froman said at the time.

Chicago-based Boeing is America’s largest manufacturer of commercial aircraft. Hailing from Chicago, US President Barack Obama will be able to use this ruling against Donald Trump’s accusations of policies that undermine US jobs.

Boeing suggests the US is now entitled to levy almost €9bn in a retaliatory levy. The US retaliation could come without a final WTO ruling on the case.

The dispute stretches back 40 years, with the US making the case against the EU in 2004. In 2011, the WTO ruled that many subsidies granted to Airbus were indeed illegal. But, EU member states claimed in late 2011 ended the subsidies. 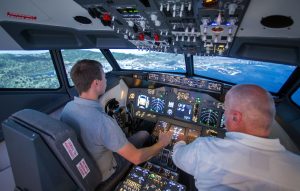 A self-built flight simulator to land at Hong Kong airport, from Rostock, Germany, 12 October 2016. In recent months, computer specialists of the project MV-IT systems have built a Boeing 737-800 cockpit and reconstructed part of the cabin with 15 seats. The simulator will be officially opened on October 19, 2016 and able to ‘land’ at over 20,000 airfields in different weather conditions and at all times and seasons. EPA/Jens Buettner