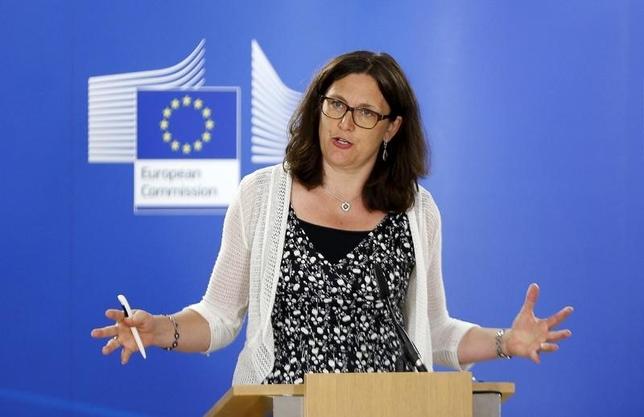 Europe’s Trade Commissioner Cecilia Malmstrom pleaded with Britons not to leave the European Union and she promised to take a tough line on China’s steel exports on Monday.

Malmstrom told an audience of students and trade lawyers in Geneva that she really hoped “Brits will choose to stay” in the European Union when they vote in the Brexit referendum next month.

“We want them, we love them, we need them. And we hope that they need love and want us as well,” she said.

Asked if she shared U.S. President Barack Obama’s view that a newly independent Britain would be at “the back of the queue” for new trade talks, Malmstrom told reporters that it all depended on the model chosen by the Brexit camp.

She declined to say that Britain would not be a priority in trade talks but suggested that the EU already had its hands full with other negotiations.

“We are now negotiating around 20 agreements so we have things to do.”

The EU is planning trade talks with Mexico, Chile, Indonesia, Australia, New Zealand, and the Mercosur countries in Latin America. It also plans to modernize and broaden a limited customs union with Turkey to include industry, agriculture, investment, procurement and services, Malmstrom said.

One impending question for Malmstrom is the decision about whether or not to designate China as a market economy. China says it was promised such a designation by the end of this year when it joined the World Trade Organization in 2001. But the move would make it harder for the EU to challenge Chinese dumping of cheap goods on the European market.

Malmstrom said even if China was officially designated as a market economy, the EU would make sure it had “robust” instruments to ensure Beijing traded fairly.

“Right now we have problems with a lot of products coming from China,” she said, citing steel, aluminum and ceramics.

The Commission was also talking to EU member states about reviving a proposal to update its trade defenses, a plan that has been stuck in the European Council since about 2012, Malmstrom said.