EU refutes Greenpeace's 'storm in teacup' on US trade 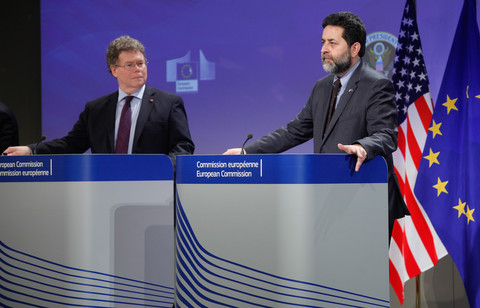 The European Commission seldom comments on leaks. But on Monday (2 May), it made a rare exception.

“We are going to obviously investigate this leak, for the time being, we are looking into it,” he told reporters.

“The documents have been retyped so we need some investigation before we know where the leaks have come from.”

The threat was issued after Garcia Bercero refuted numerous claims made by Greenpeace that the US was forcing the EU to lower standards on public health and the environment.

He said the leak would damage the “atmosphere of mutual trust” needed in the negotiations.

Both the EU and the US said the interpretations given to the leaked papers were misleading.

‘Storm in a tea cup’

The commissioner for trade Cecilia Maelstrom, described the leaks in her blog as “a storm in a teacup” and said protection levels for consumers, food safety, and the environment would not be altered.

The leaked documents outline previously secret American positions on 13 chapters of talks that are set to shape the so-called Transatlantic Trade and Investment Partnership (TTIP). The EU, unlike its US counterparts, has made its positions public.

Greenpeace had retyped the pages and then destroyed the originals to protect its source.

The leaks, taken from April, are not final outcomes or decisions that have been agreed upon. They show only positions after the 12th round of talks.

The EU and the US last week concluded a 13rd round in New York, after more than two years of talks, with an aim of wrapping up the deal before US president Barack Obama leaves office.

Greenpeace says the prospect appears increasingly unlikely and pointed out gaps and rollbacks in the leaks that it says undermine EU standards.

It noted a “precautionary principle” was not mentioned anywhere in the leaked texts, leading the activists to conclude it had been dropped altogether.

The principle is enshrined in the EU treaties and is supposed to ensure “a higher level of environmental protection through preventative decision-making in the case of risk”.

But Bercero, for his part, said the principle remains fully intact and had been mentioned in a document made public in March.

“It is obvious that we are not going to trade anything about the precautionary principle,” Bercero told reporters.

He also refuted another Greenpeace claim that the EU and US are ignoring 70-year old “general exceptions” in the World Trade Organisation (WTO). The rules impose higher trade protection standards on health, human, animal, and plant life.

Greenpeace said it too was not mentioned anywhere in the leaks, leading them to conclude that both sides are likely creating a new regime that places profits ahead of people and animals.

He noted that the WTO rule would be reserved for a different chapter, which has yet to be written up.

Despite the EU commission’s assessment of its conclusions, Greenpeace maintains its position.

Jorgo Riss, who heads the Greenpeace office in Brussels, said that omitting the precautionary principle from the texts was a demonstration of how the EU is being bulldozed by the US.

He noted the US side aggressively pushes its views while the EU remains mute.

On the future chapter with the WTO rule, he said it was shocking that after nearly three years of talks issues like public health and the environment still have to be discussed.

“The fact that none of this is present in the current 240 pages after almost three years is a big issue for concern,” he said.

Riss says the leaks are needed to broaden the public debate and allow people to better understand the implications of an agreement that will cover everything from chemicals to public procurement and agriculture.

“The negotiations must stop because the current negotiators are not acting in the public interest,” he said.