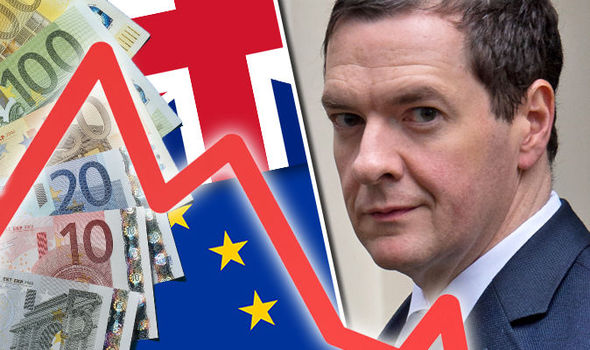 Taxes will have to rise by more than 17% across Europe to fill the gaping funding shortfall, figures will suggest.

Only by leaving the EU can the UK regain the economic independence necessary to avoid being sucked into the “fiscal crunch”, the research will say.

The findings are to be unveiled today by senior Labour MP Gisela Stuart, the chairman of Vote Leave.

Figures show that public spending on pensions across the EU is forecast to rise by 2.1% of GDP by 2050.

At the same time, debt interest payments are set to go up by more than double that rate.

The combined effect is a conservative estimate that taxes will have to rise by more than 17% as the shrinking working-age population pays to support a swelling army of the retired.

Former minister Ms Stuart is expected to say: “This daunting demographic reality just goes to prove that the euro zone is a ticking time bomb – an alarming reality that all EU members will inevitably be affected by.”

The former Foreign Office minister, who helped to draw up the EU’s Lisbon Treaty, will argue that Brussels is not only institutionally resistant to reform, but incapable of responding to fast changing political and demographic realities.

She is expected to say: “Seeing Europe’s power politics operating up close was not pretty. It was in the worst traditions of the EU — a mule-like refusal to listen to democratic concerns or accept any suggestions of deviation from the orthodoxy of political integration.

“Questions like democratic accountability and economic competitiveness, which are so central for us in Britain, are downgraded in case they become a diversion from the European Project. I call it integration at whatever the cost or consequences.

“This referendum is our opportunity to set ourselves free from an organisation that only serves its own interests. That is why I am proud to chair the Vote Leave campaign.”

As well as arguing for the opportunities and benefits presented by throwing off the shackles of the EU, she will speak about the risks of staying in – cautioning that: “Voting to remain on 23 June is not just about staying in the EU as it is today, but also about staying in as it will look in 2025 or 2035.”

She will add: “An EU where the priorities of the euro zone will gradually and inevitably take over Brussels institutions.

“If we don’t want to be part of this we must Vote Leave.” She will conclude by urging voters: “For years, British governments have tried to be pragmatic about Europe. They have taken the view that you can always kick the big decisions down the road. That we can be inside the EU without being part of the “State building project”.

“But to be in both camps became impossible when the Euro created.

“Now the time has come to decide what is in the best long term interest of this country.

The warning comes in stark contrast to George Osborne’s latest claims that Brexit would damage our economy.

“If the EU were an energy supplier or a bank, you would long ago have stopped believing its marketing, you would have seen it was hopeless value for money and never listened to its customers. You would just move your account.

“It is time for Britain to recognise that Brussels has had enough chances. And that the only safe option is to Vote Leave.”

Meanwhile, a leading economic think tank last night declared that the EU was being “made redundant” by the growth of global regulation authorities such as the World Trade Organisation.

The Adam Smith Institute said Britain should quit the EU and become a “global citizen”.

Author of the report Roland Smith said: “The rhetoric about the UK being isolated is out of place when you consider the global landscape.

“If the EU didn’t exist, we wouldn’t be in a rush to invent it. “The global single market is overtaking the EU, and since we are not in the Euro and have no need for political integration, it is time to leave and take our place as a truly global citizen.”