EU deal yet to bear fruit for Ukrainian exporters 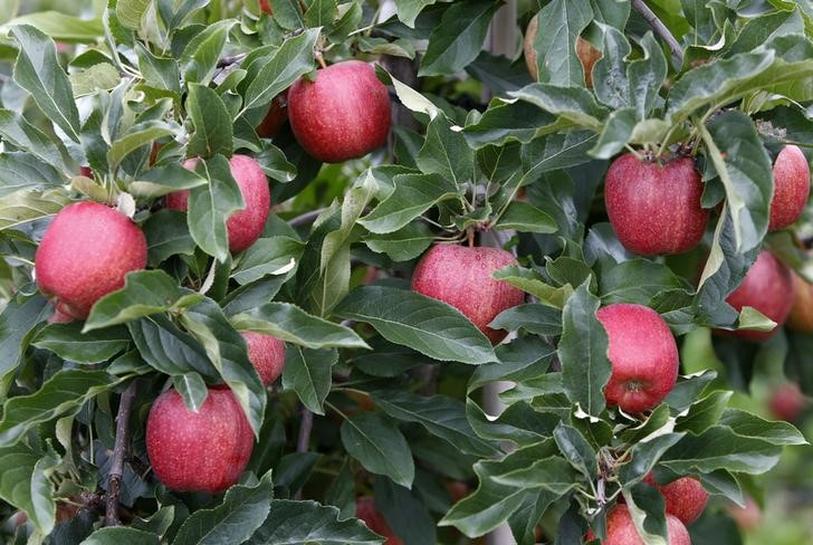 A tree laden with apples stands in an orchard in Kressbronn near Lindau at lake Bodensee, southern Germany August 20, 2014.

GORODOK, Ukraine Ukraine’s Association Agreement with the European Union was meant to lure the bread basket of the former Soviet Union away from its longstanding ties with Russia by offering better access to the EU market.

But debate about it was the spark that lit the Maidan street protests in 2013 and a pro-Russian insurgency that led to more than 9,000 deaths. The disruption sent exports to Russia into freefall and depressed sales to the European Union.

Now many exporters are worried that the deal, in place provisionally since January, does not offer enough to compensate for the collapse in trade with Russia to just $4.83 billion last year from $15.06 billion in 2013.

“Our company does not feel any change,” said Taras Barshchovsky, the founder of T.B. Fruit, the parent company of Galicia-Trade, which makes juices from apples, carrots, cherries and other fruits.

Under the deal tariffs were lifted on most products traded between Ukraine and the EU. Quotas for textiles were lifted and will be phased out over 5 years for mineral products, chemicals, plastics and wood.

In agriculture, by far the largest sector of the economy with a 12 percent contribution to gross domestic product, and also an area where Ukraine can successfully compete with European producers, many quotas were unchanged including for maize, alcohol and fruit juice.

Barshchovsky said the low quotas were a problem for his company and showed the deal had limited benefits for Ukraine.

“In my opinion, they’re pulling the wool over our eyes,” he said.

The EU rejects any idea the deal is unfair and Ukraine’s exports to the EU rose 3.3 percent in January, the first month of the deal, to 1.02 billion euros compared to a year earlier, according to data from EU’s statistics agency Eurostat.

And Ukrainian attitudes towards the EU remain broadly positive. A survey in November showed 58 percent of Ukrainians supported the EU deal, versus 15 percent who wanted a customs deal with Russia.

There is, however, growing disillusion with how Ukraine has turned out despite promises of the Western-backed leaders who came to power after Maidan. Corruption is still endemic, the separatist war in Ukraine’s Russian-speaking east is raging, and a political crisis has delayed talks for new overseas aid.

At the same time, Ukraine’s chief backers, the United States, the EU and the International Monetary Fund, are getting increasingly frustrated with the slow pace of change, and the IMF has threatened to end a multi-billion dollar aid package.

The Association Agreement itself may be under threat after Dutch voters rejected it in a referendum on Wednesday, although Ukrainian President Petro Poroshenko said the result won’t push his country from an EU path.

Under pressure from Russia, the Kremlin-backed former Ukrainian President Viktor Yanukovich pulled out of signing the Association Agreement in 2013, setting off a chain of events that culminated in his ouster in February 2014.

Some see Wednesday’s Dutch rejection of the deal, even if the result is non-binding and was already signed by the Dutch prime minister and all other European Union nations, as playing into Russia’s hands.

With Russia also imposing a trade embargo on Ukraine and blocking the transit of Ukrainian products to Asia, Alex Lissitsa, Chief Executive Officer of Ukraine’s agricultural lobby UAC, estimates Ukrainian farmers are losing about $1 billion a year in business from Russia.

“At this stage Ukraine has received few benefits from the free trade zone – it is simply a political and long-term deal,” he said.

“Markets that were open have remained open, while those that were closed, remain closed,” he added.

Ukrainian potatoes were left to rot, he said, because the markets of Russia, Crimea and the war-torn Donbass region had gone, and sales to the EU can’t make up the shortfall.

Sugar producers have a similar complaint. Ukraine produces 1.5-2 million tonnes of sugar a year. But its quota to sell to the EU is just 20,000 tonnes, Ukrainian sugar union Ukrtsukor said, saying the EU should raise this to at least 300,000.

Ukraine’s main poultry union says its businesses lost $60 million a year from being shut out of the Russian market.

Russian restrictions on the transit of Ukrainian goods meant Ukrainian businesses were forced to reroute trade through costly routes such as Georgia and Azerbaijan, the union said.

“The main problem is that there is a very small quota for certain types of produce, including poultry products,” it wrote in an email.

Yuriy Kosyuk, who owns Ukraine’s largest poultry company and an ally of President Poroshenko, went as far as to say publicly that Ukraine had been “duped”.

However, the poultry union acknowledged that while the EU is a huge opportunity for poultry producers Ukrainian companies need time to bring their products up to EU standards.

For other sectors of the economy, the deal has also made little difference.

“For metallurgists the agreement with the EU did not lead to any changes in terms of quantity or quality of trade. We have traded openly with the EU since Ukraine joined the WTO (World Trade Organization) after tariffs were scrapped on metal product supplies,” said Roman Kurashev, marketing director for Metinvest, Ukraine’s largest steel maker and exporter.

Both the EU and Ukraine’s government have played down the effect of the quotas. Protesters didn’t man the barricades at Maidan “just to sell a jar of honey to Europe,” Agriculture Minister Oleksiy Pavlenko told Reuters in an interview.

“I wanted my children to live in a European country with European values,” he said. “Any process is long-term process and you cannot get everything at once.”

The EU’s representative office in Kiev said in a statement the deal gives Ukraine fast access to EU markets with quotas “limited to a small number of agricultural products.”

Ukrainian exporters aren’t able to sell enough products in many cases because their products don’t meet the standards stipulated in the agreement, it said.

“Rather than blaming the EU and asking for additional quotas, many producers should rather lobby the Ukrainian government and urge it to focus on the implementation of the sanitary and phytosanitary chapter of the (agreement),” the statement said.

Ukraine and Brussels have a huge stake in showing they can make their relationship work and that Kiev’s pain of losing its alliance with Russia will be worth it in the long run.

Mired in internal feuding and struggling to put Ukraine’s war-torn economy back on track, the popularity of the post-Maidan government has collapsed. That in turn could bring about snap elections later this year that could see a sharp rise of populist parties such as the Radical party, which has railed against the EU deal as well as the IMF’s austerity measures.

“What they signed is categorically not in the interests of Ukraine,” said Radical party leader Oleh Lyashko about the deal.

“It is not mutually beneficial if they give us peanuts and, in exchange, demand we take off our trousers, sell our land, our wife and our country.”