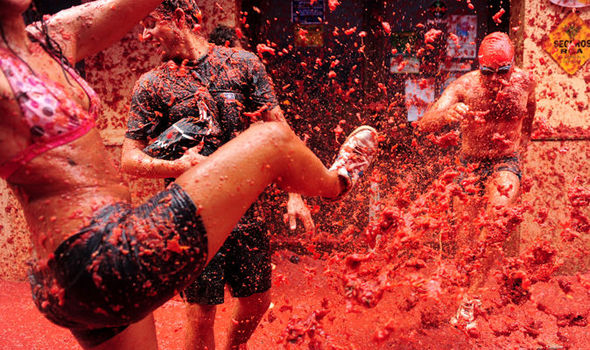 Brussels was left fuming when the Australian government slapped anti-dumping taxes on two brands of imported Italian tomatoes which threatened to flood the market and drive down domestic prices.

And it may now refer Australia to the World Trade Organisation to be investigated.

European Trade Commissioner Cecilia Malmström has warned the move could harm hopes of any future free trade agreements, leaving the EU in the soup.

The food fight began when officials in Canberra accused Naples-based processors Feger and La Doria — two of Italy’s biggest exporters – of dumping their wares Down Under at unfairly low prices in February.

And they warned EU Common Agriculture Policy payments to Italian growers had led to huge surpluses which could hit the livelihoods of Australia’s market gardeners.

The tomato row comes as patriotic Australians are growing increasingly concerned about the economic impact of cheap international food imports.

Many believe EU subsidies give the European industry an unfair advantage – but the irate Italians insist CAP payments and production are not linked. It has accused Canberra of breaking global trade rules.

Mr de Castro said: “This approach is clearly in breach of WTO rules and sets a dangerous precedent for agricultural raw material processors in the EU.”

Ms Malmström said: “The Commission is very concerned about the anti-dumping investigations which Australia has initiated against Italian processed tomatoes in the last few years and, in particular, about the questionable methodology recently used in order to establish dumping margins.

“The Commission is following the investigations very closely, in full support of the Italian companies concerned and in close co-operation with the Italian government”.

“The Commission has made Australia aware that the imposition of these measures has the potential to develop into a significant trade irritant given its systemic implications and may even undermine support for a future free trade agreement with Australia.”

“The Australian government remains committed to securing a free trade agreement with the EU.”