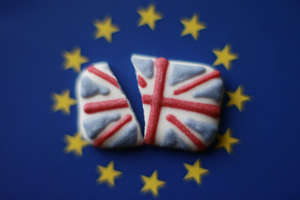 © Press Association The U.K.’s departure from the European Union may turn out to be the most tortured divorce proceeding in history.

There will be high-level summits and hours of back-room horse trading before the U.K. breaks away. While the negotiations will be intense, the EU treaty sets out the parameters in just 261 words — meaning much is left for politicians, lawyers and bureaucrats to wrestle over in the months and years to come.

The task will be vast. Although prime ministers from Margaret Thatcher onward successfully defended opt-outs from the euro and passport-free Schengen zone, about half of British legislation with a significant economic impact derives from the EU, the House of Commons Library said in 2010.

“It’s very, very complex because we have everything entangled after 43 years of British membership,” said Jean-Claude Piris, a Frenchman who was the EU Council’s chief lawyer when the bloc drafted Article 50, its exit clause, at the start of this century. A formal exit process hadn’t existed before and EU countries “wanted to prove that the EU wasn’t a jail; that you could get out — at that time, nobody ever imagined it would actually be used,” Piris said in an interview.

Talks on Britain’s departure can start as soon as the U.K. triggers Article 50. Legally, there must be separate sets of negotiations — one relating to the U.K. extricating itself from its current arrangements, the other dealing with the two sides’ eventual future relationship — a process that will postpone Britain’s clean break for years if the EU insists talks on the second can’t start until the first is concluded.

“The Brexit negotiations will take much longer and be far more complicated than many British politicians realize,” Charles Grant, Director of the Centre for European Reform, said in a research report. In fact, Grant said, there may need to be six sets of agreements: an EU divorce deal, a new U.K.-EU trade regime, an interim EU accord to cover the period between them, full membership in the World Trade Organization, new trade deals with other countries, and new foreign policy and defense arrangements.

According to Article 50, leaders set down the red lines for negotiations, leaving officials to thrash out the details. Among the key issues are London’s future as a financial center and the ability of EU citizens to live and work in the U.K.

While late-night make-or-break summits of the sort seen at the height of the Greek debt crisis are unlikely, they can’t be ruled out, according to Kenneth Armstrong, professor of law at the University of Cambridge.

“If it goes well it would be better orchestrated; clear rounds, clear chapters and signing at the end — 11th-hour negotiations would be a very poor way of doing it,” he said. But “even an orderly chapter-by-chapter de-accession might go down to the wire. It cannot be excluded that particular problems with specific chapters could lead to last-minute horse trading.”

The Brussels-based European Commission, the EU’s executive branch, wants a piece of the action, too, and it’s here that much of the technical expertise exists.

Heads of governments will be “in the driving seat,” said Derrick Wyatt, Emeritus Professor of Law at the University of Oxford, who shared his expertise on the Brexit process with a House of Lords committee. “I don’t want to understate the room for maneuver that the Commission will have in day-to-day negotiations but national governments will be very, very interested in the process.”

The withdrawal agreement has to be completed within two years unless all EU countries agree to an extension. That agreement will sort out all the details of the U.K.’s current obligations including budget payments, employment terms for EU staff, and the status of EU agencies.

“There will be disputes because there are so many ongoing contracts and procedures,” Piris said. “If someone is under an arrest-warrant procedure, if there’s an ongoing procurement procedure, an ongoing procedure on competition, state aid, and so on, you have to solve as many questions as possible in the withdrawal treaty.”

EU President Donald Tusk and the Commission have said that the withdrawal agreement needs to be completed before talks on the second deal can start. So the U.K. may find itself having to negotiate the second stage once it has already left, with far less leverage.

“The U.K. would be out, there would be no agreement — and the U.K. and the EU would slip into World Trade Organization rules” Wyatt said. “The idea this would be sought by either side is strange.”

This is the hard part, where the U.K. will be pushing for the most beneficial trading alliance with the EU.

This would be more like a negotiation over a traditional EU trade deal and it is expected to require unanimous agreement by every EU country, and ratification in national and regional parliaments across the bloc.

“It will be very long,” said Piris. “You have to negotiate trade agreements with the EU, but also you have to prepare your legislation which replaces EU law and negotiate with the EU as much possible to cooperate in some policies you’re interested in such as climate change, the fight against terrorism, transportation, energy.”

As an example, the EU’s free trade agreement with Canada took seven years to negotiate and it’s still not ratified.

Eventually the U.K. will be out, ending a chapter in British history that started in 1973.

And for the European Council’s legal counsel from 1988 to 2010, who oversaw the penning of Article 50, seeing it used will give little satisfaction.

“I am very, very sad,” Piris said. “It’s a catastrophe for the U.K. and very, very bad, even catastrophic, politically, for the EU itself.”