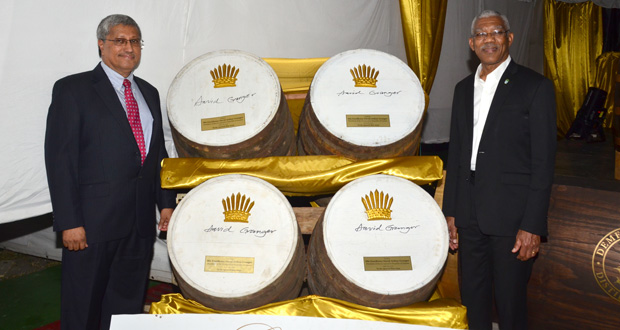 DEMERARA Distillers Limited (DDL) says it is encouraged by President David Granger’s commitment of supporting the local rum sector to ensure its survival and sustainability.According to a press release from DDL , the President’s support comes at a time when it faces the major threat of competitiveness on account of trade-distorting measures taken by the U.S. federal government.
DDL said the Head-of-State made the commitment when he addressed company officials, industry leaders, sections of the business community and members of the diplomatic corps who had gathered for the launch of the El Dorado Grand Special Reserve 50th Anniversary Special Edition Rum at the El Dorado Rum Heritage Centre on the East Bank of Demerara, recently.
“Caribbean rum producers also face a major threat to their competitiveness owing to trade-distorting measures of the U.S. federal government. The U.S. federal government allows a tax rebate — estimated to be valued at several million dollars per annum — to the U.S. Virgin Islands and Puerto Rico. The rebate acts as a subsidy to rum producers in those two territories, affording an advantage over other Caribbean rums in the highly competitive U.S. market,” the release quoted the President as saying.
DDL noted the President’s call on CARICOM to sustain its protests at the U.S. Government’s actions. “The Caribbean Communty’s Council for Trade and Economic Development (COTED) has protested against these discriminatory measures. They are seen as being inimical to the sale of Caribbean rums in the U.S. market and threaten the “the long-term viability of the rum industry in the Caribbean,” the President noted.
He added that, “Caribbean countries stand to lose US$700M per annum and some 15,000 jobs are likely to be affected unless these tax rebates are withdrawn. Litigation in the World Trade Organization (WTO) is likely to be an extremely expensive and exhausting process. The Caribbean Community, therefore, must use its diplomatic strength to help resolve this problem which is affecting the health of our economies and the wealth of our countries.”
According to the release, the Guyanese leader noted that the country’s rum industry is precious and that it must be protected and preserved in the face of this peril. He said that workers’ jobs and the livelihoods of those who indirectly depend on the industry are at stake, while the loss of foreign exchange and excise earnings by the rum industry can result in severe problems in our economy. He said that Guyana’s rums are an important economic sub-sector and it is in the national interest to ensure the survival and sustainability of this industry. He said the Government of Guyana is committed to supporting the industry.
The release quoted DDL’s Chairman Komal Samaroo, “This is the strongest ever statement of support for the local rum industry from any Guyanaese leader, and the industry has good reason to be encouraged.”
Earlier, Samaroo outlined the challenges that DDL faced in pioneering the development of premium rum products for the North American and European markets. It said the commitment of the Government of Guyana is further vindication of these ongoing efforts.