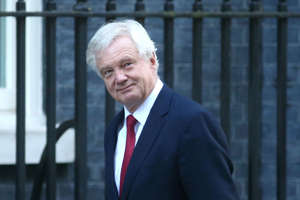 © Getty Images British Secretary of State for Exiting the European Union David Davis David Davis has accused Treasury officials of trying to “undermine” Brexit negotiations as part of a “desperate strategy” to keep Britain in the Single Market.

It today emerged that leaked draft Cabinet papers warned that if Britain leaves the Single Market without a new deal it will cost the Treasury £66billion in tax revenues.

Mr Davis, the Secretary of State for Exiting the European Union, is understood to believe that the the warning is part of a “succession of treasury briefings that are damaging negotiations”.

Other ministers accused the Treasury of putting Britain’s economic stability at risk by “talking down the economy” at a time when the value of the pound is plummeting.

It yesterday emerged that draft Cabinet papers include figures based on the same forecasts used by George Osborne during the referendum, which were branded “project fear” by eurosceptic MPs.

The forecast claims that Britain’s national income could fall by as much as 9.5 per cent if Britain leaves the Single Market and has to rely on World Trade Organisation rules.

Mr Davis is understood to be furious at the use of the figures, which he believes risk undermining Britain’s negotiating strategy. “He thinks it is pulling the rug from beneath us,” a friend told The Daily Telegraph.

“It fits in with a succession of treasury briefings that are damaging negotiations.” Theresa May’s official spokesman yesterday repeatedly refused to endorse the figures and said it did not want to “reheat” the debates of the referendum.

The spokesman said: “That was research that was carried out and the figure was published some time ago that figure is on the record. “What is important is going forward we look to make sure we have the strongest possible negotiating position.”

Whitehall sources said that the leaked papers are part of an ongoing “war” between Philip Hammond, the Chancellor, and Brexit ministers including Mr Davis, Liam Fox, the International Trade Secretary, and Boris Johnson, the Foreign Secretary.

While Theresa May has refused to say whether Britain will leave the EU’s Single Market, Mr Davis has indicated in the Commons that it is likely to do so.

Dr Fox has also suggested that Britain should leave the customs union, which sets EU-wide tariffs on good traded with non-EU countries.

He has indicated that he favours Britain becoming and independent member of the World Trade Organisation, which would enable Britain to strike its own deals with non-EU countries.

A senior Treasury official yesterday launched a direct attack on on Dr Fox: “Liam is the one who needs to watch his back. Of him and Philip Hammond, I know which is more sackable, and it’s not the chancellor.

“Liam is entitled to his belief that we would be better off outside the customs union, even if he doesn’t have any actual evidence to support that.

“But what people need to realise is that there’s self-interest involved here: if we did stay in [the customs union] then he’d be out of a job. For us this is about what’s best for the British economy. For Liam it’s about what’s best for Liam.” Jacob Rees-Mogg, a eurosceptic Conservative MP, accused the Treasury of “talking the economy down”.

He said: “The Treasury is creating instability potentially deliberately because it backed the European case so strongly in the referendum. It is causing difficulties for the negotiating strategy.

“I thought it was bad enough during the campaign, but the Treasury is now undermining the Prime Minister. This is really serious.”