Former chancellor Lord Darling has warned the public has been “lulled into a false sense of security” and warned the Brexit vote will batter the UK economy.

He told Sky News’ All Out Politics programme the plummeting pound and decisions taken by businesses in the wake of the EU referendum vote would be felt in a year.

He said he stood by his forecasts made during the campaign, which were dismissed by Brexiteers as “project fear”, that significant measures would need to be taken by the Chancellor to prepare for economic damage.

And he warned it was “critical” that the UK remained in the single market and customs union because a hard Brexit would be a “hell of a risk”. 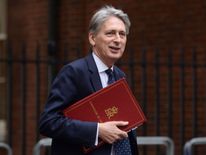 Speaking to Sky’s Adam Boulton, Lord Darling said: “Whenever something dramatic happens to the economy there is always a lag before the full effect is felt.

“At the moment because nothing has happened, other than, of course, the pound has plummeted, people have lulled themselves into a false sense of security.

Lord Darling added Chancellor Philip Hammond would have to make a judgement on what to expect from the economy in his Autumn Statement on 23 November.

During the EU referendum campaign, Lord Darling stood alongside George Osborne to prophesy tax rises and spending cuts – including £2.5bn from the NHS – in a post-Brexit emergency budget, quickly dubbed the “punishment budget”. In the event it has yet to materialise. 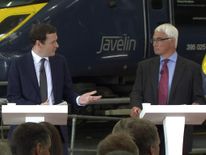 Image Caption: George Osborne and Lord Darling side by side on the economy

However, he told Sky that since June nothing had really happened and there had been no big decisions, however, he warned the pound had dropped and the effects would be felt next year

His comments come as Mr Hammond made clear to Cabinet colleagues he will adopt a flexible fiscal framework allowing him “headroom” to react to a Brexit impact on the economy.

It means holding back so if the economy starts to tank the Government will have enough in reserve to start increasing spending and cutting taxes.

At Tuesday’s Cabinet meeting, Mr Hammond made it clear “we face an unprecedented level of uncertainty”, according to The Financial Times.

The Labour peer, who was in charge of the purse strings when the recession started, also warned it was now time for Prime Minister Theresa May to be clear about what she wanted from Brexit.

He said she and Mr Hammond had hinted at wanting to stay in the single market and customs union for certain industries, namely automotive and financial services, but argued “we need to know where the Government stands”.

He added: “To fall back on the World Trade Organisation regime where you have got to get 160 countries to agree with you – that’s taking a hell of a risk.

“I firmly believe that being members of the single market and the customs union, so we don’t have the hassle of goods being stopped at the border, is absolutely critical for British industry.”