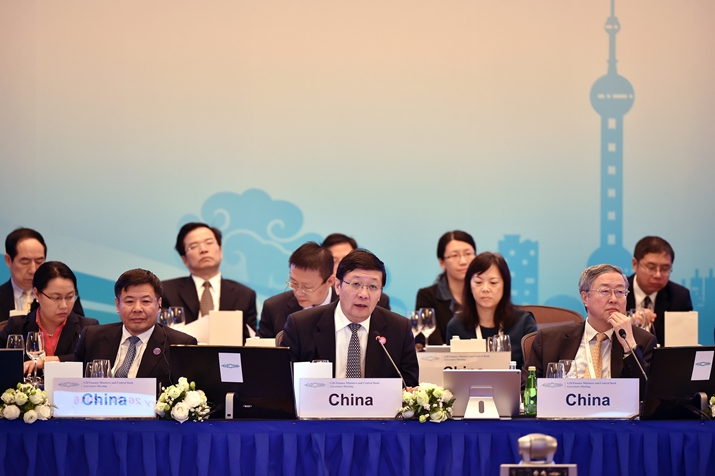 China should seize the moment at the Group of 20 (G20) Summit in Hangzhou, capital of Zhejiang Province, in September to inject vitality into the organization and stimulate global governance.

The G20, as an important platform for world economic cooperation, once championed the role of tackling the 2008 financial crisis. Even so, it is currently beset by a raft of problems, such as a lack of authority and executive power.

Currently, due to the changes in the world economy, the G20’s mission is transforming to one promoting the long-term sustainable development of the global economy.

In my opinion, one of the most urgent and crucial issues is to establish a permanent secretariat for the G20 and to improve macroeconomic policy coordination among top global economies.

The G20 continues to play a significant role in global governance. On the basis of its past achievements, a reform within the organization would be the optimal choice to improve the coordination of global macroeconomic policy and to revitalize its relevance on a global scale.

The G20 serves as an international forum for the world’s most prominent policymakers, including representatives from both developed countries and emerging economies. The combined population, land area, GDP, as well as total trade volume of its members account for a large proportion of the entire world, and therefore they exercise enormous economic influence.

For a long time, G20 meetings at all levels served as a platform for the exchange of information and policy communication, but its lack of executive force was a glaring flaw—without it, the forum is toothless. This would negatively affect the organization’s authority and influence.

The main aspect of the G20 consists of gatherings hosted by the rotating presidency country, including summits as well as meetings of finance ministers and central bank governors. Other derivative forms include business meetings, think tank meetings, and more.

However, due to the fact that the topics and content covered in those conferences are mostly broad and diverse, it is extremely difficult to push forward coordination, especially considering the divergence of numerous parties’ interests.

In recent years, some members of the G20 have called for the establishment of a permanent secretariat for the forum. The secretariat proposed would function as a standing body to organize and coordinate various tasks to be completed when the main meetings are adjourned.

A permanent secretariat could improve the effectiveness of communication and coordination between G20 members in terms of decision making and help supervise and push forward the implementation of resolutions. It could also help enhance collaboration between the G20 and other international organizations, as well as help steer the topics and themes of meetings away from any heavy influence from host countries.

The world economy has been undergoing slow growth in recent years, and the economic trends and policies of different countries have diverged significantly. In particular, the spillover effects of macroeconomic policies from major economies have been on the rise. Global financial risks are also increasing, serving as a poignant reminder to relevant countries to urgently improve the coordination of current global macroeconomic policies.

The U.S. economy, for example, has taken the lead in terms of its recovery and is courting with attempts to raise interest rates. The economic recovery in Europe is relatively weak, and the European Central Bank’s policy of quantitative easing (QE) is still expanding. In Japan, Abenomics—named after the country’s Prime Minister Shinzo Abe—has produced only limited results, and the Japanese central bank has set a negative interest rate.

Meanwhile, bulk commodity prices continue to slump and short-term capital flows are accelerating in global markets. The foreign exchange market fluctuates incessantly and emerging economies also face additional risks from a variety of economic factors. Under such a complicated milieu, establishing and improving the coordination of macroeconomic policy mechanisms among major economies is greatly needed to avoid another financial crisis.

For 70 years, the influence of the Bretton Woods System has been evolving and still plays an important role in global governance, after the emergence of floating exchange rates in the 1970s. Even after the establishment of the Group of Seven (G7) in the mid-1970s, and the replacement of the General Agreement on Tariffs and Trade in the 1990s for the WTO, as well as the establishment of the G20 in 1999, the system is still affecting the current global financial system.

Now that new challenges have reared their faces, the underlying flaws within the system have been fully exposed. For instance, in terms of fiscal and monetary policy coordination, G20 members have a biennial assessment on each country’s fiscal standing, public debts and potential financial risks.

It is meaningful to reveal such risks, so that an under-assessed state can focus on ameliorating their problems and adjusting its economic policy to reduce hazards. However, this system relies on the conscientiousness and frankness of the organization’s members. Also, the current financial system does not provide an efficient solution for problems such as interest polarization and the increasingly negative spillover effects of leading economies’ macroeconomic policies.

In regards to trade policy coordination, all kinds of bilateral and multilateral free trade agreements are surging, and the WTO Doha multilateral trade negotiation is severely hindered. Besides, major world economies are all facing their own structural problems. The meetings of G20 finance ministers and central bank governors have absorbed structural reform into the framework of a “strong, sustainable and balanced growth.” As for structural reform, G20 members are required to strengthen their policy coordination as well.

The proposed G20 permanent secretariat could be set up under the IMF’s support. The IMF has played a unique role in coordinating macroeconomic policies in the international community. In particular, it has been active in dealing with the global financial crisis. Furthermore, it has abundant experience in global economic and financial governance, and is very familiar with the internal workings of multilateral organizations. Under China’s presidency this year, such a proposal to establish a permanent secretariat could be expected to gain support from G20 members.

A “5+1” global macroeconomic policy coordination mechanism could also be formulated. The “5+1” would be composed of the United States, the EU (eurozone), China, Britain and Japan plus the IMF. The currencies of those five entities are already included in the IMF’s special drawing rights (SDR) basket.

Since those six members have a profound influence on the world economy, enhancing the coordination of their macroeconomic policies will help to effectively control market volatility and risk. It could also maintain the stability of the global financial system and promote a strong, sustainable and balanced world economy.

Regular meetings of the “5+1” should be organized to focus on their policies concerning fiscal, monetary, foreign exchange, trade, structural reforms and other affairs. The objective is to enhance stability within these five major economies while reducing negative spillover effects to other countries.

Finally, the usage of the SDR could be scaled up. Currently, the international monetary system is still dominated by the United States. That means the majority of the fiscal responsibility has been shouldered by U.S. dollars. That is not only a risk for the overall stability of the global financial system, but is also bad for the independence of the U.S. Federal Reserve’s (Fed’s) monetary policy. In a lot of situations, the Fed faces a difficult choice between the stability of the U.S. dollar’s value and the balance of supply and demand of global liquidity. Promoting the status of the SDR in international payments as a supra-sovereign currency could help reduce the risk in the international monetary system, and it will also help increase the IMF’s financial resources.

In what ways we could expand the SDR’s usage? One way might be by revising relevant regulations regarding the SDR, including its valuing and issuing methods, and also establishing a settlement relation with other currencies.

The SDR’s usage could also be extended to international payments among IMF members and in crisis-relieving assistance. The SDR basket could also be used as the pricing unit in international trade and investment. In addition, the IMF could provide SDR loans to its members’ central banks as well as that of other multilateral development banks. The World Bank, for example, could as a result promote the usage of the SDR in key infrastructure investments around the world.

In regard to the implementation of these suggestions, it would be better to build an atmosphere conducive to follow-up actions. Seminars on the topics could be organized by think tanks to initiate academic discussions on related issues, including the organization framework, rules of decision, operational mechanism and so on. Meanwhile, China could actively communicate with relevant parties informally, trying to reach a better consensus.

After that, a formal proposal could be suggested at the upcoming meeting for G20 finance ministers and central bank governors in July. A resolution regarding the topic could be finalized during the G20 Summit in September.