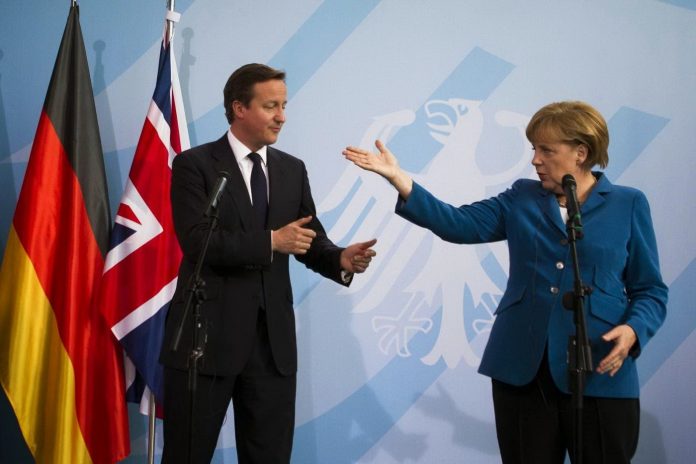 Thanks to the union of several tiny countries in the island of British — Scotland, Wales, Northern Ireland, led by England — giving up their sovereignty to form the Great Britain, the United Kingdom, enjoying large population and market, gradually became the economic and military powerhouse of Europe. And also thanks to centuries-long stability and peace the union brought to Britain, economic development — and the first industrial revolution — blossomed with little or no opposition.

It was this unmatched British imperial dominance that kept France and Germany so envious that they did everything possible to dismantle the British Empire at all costs. Little wonder, during the 100 years of British hegemony, Europe was perpetually at war, including devastating Napoleonic Wars. But as Europe, led by France and Germany, endlessly fought Britain, the United States, taking advantage of the economic destruction caused by these wars, was able to keep rising.

Little wonder to express its anger to the rest of Europe, particularly France and Germany for the role they played in making sure that the Great Britain was replaced by the US in 1945 as the economic and military superpower, the UK has continued to do everything possible to undermine any form of European dominance. And that was why it is part of the first five nations that started the unification of Europe in 1957. When it eventually joined on January 1, 1973 along with Denmark and Ireland, it did so with immense reluctance. But another reason the UK was Eurosceptic had to do with its unannounced treaty with the US where Britain helped the former in keeping Europe divided; in return, London enjoys preferential treatment from Washington.

So, rather than being a fan of the EU, Britain has always secretly done everything to undermine the EU. And it is because of London’s anti-European Union stance that led to Britain always keeping one foot in and one foot out. That’s also why while London grudgingly accepted the EU’s custom union, which it saw more beneficial than otherwise, London was fiercely opposed to a common currency – the euro. It also refused to join Schengen Area visa policy by the EU. Had London accepted euro, not only would that mean the end of Britain’s glorious imperial past which the pounds with the Queen’s head represented. In fact, Britain’s special relationship with America, which has been the reason why London, and not Frankfurt, is the world’s second financial capital next to New York’s Wall Street and why Eurodollar (which is the largest concentration of dollars outside the US) is domiciled in London.  Notwithstanding London’s opposition to the euro, the entire EU preferred London to Frankfurt as Europe’s financial capital.

For this special relationship between Washington and London, understandably, the rest of Europe — particularly the two big and powerful European countries of Germany and France — have always seen Britain as America’s mole in Europe, and as a result has been doing everything to make sure that there is no European unity that could stand in the way of America’s hegemony in the world. So, keeping Europe fragmented has always been in the interest of both Washington and London. And to ensure that that remains the case, the CIA and the MI6 have a special channel of intelligence sharing more than any other two countries in the world.  This special relationship between the US and the UK, understandably, has been behind this endless nostalgia for the non-negotiability of Britain’s sovereignty.

Also, there is another important economic advantage the UK has enjoyed over the rest of the EU, notwithstanding its weak industrial and manufacturing base, which is far behind that of Germany and France. It’s because of robust economic ties with some of its former colonies in Africa and Asia. In fact, the whole of Australia and Canada as independent as the two countries pretend to be, their economies and politics are dominated by British investments and British citizens. Little wonder, the Queen remains the head of state of both Canada and Australia.

Now that Britain has finally exited the EU, Britain is now coming to terms that actually it shot itself in the foot. At least, within a few hours of the announcement, from the fifth largest economy in the world Britain suddenly became the sixth largest economy falling behind France. Brexit has since caused financial tsunami around the world, wiping away over $2tn in stock market value around the world. In the meantime, the pounds plunged to its lowest level in 30 years. The EU’s hundreds of billions of dollar investments in Britain are now threatened. As the pounds plummet, so is the unprecedented exit of the currency, since every investor knows that the collapse in value of the pounds is only starting. Across the EU, pound-denominated cards are understandably being rejected, causing fear among British people living and working in the EU.

As if not enough, the First Minister of Scotland is spiting fire, insisting that the Scot Parliament will meet not only to turn down the outcome of the referendum but begin the process of organising another referendum with the goal of exiting the United Kingdom and then join the EU. Should that happen, Britain can a few years from now be reduced to a tiny state of England, which it used to be before May 1, 1707, when the United Kingdom was created. The UK’s loss of influence in the world would mean losing London’s European financial capital to Frankfurt. And with this, comes the challenge of the City of London’s role as the world’s second financial capital after New York’s Wall Street. Without being the financial gateway to Europe, Eurobond and Eurodollar dominated by London will cease to be the case.

As anti-Britain grows across Europe, the real estate market and tourism industry in Britain, which is a major driver of the UK economy, will severely suffer, with most Europeans avoiding to visit or live in Britain especially as a result of having to obtain visa to travel to Britain. Also, British universities and English Language schools, which have been enjoying patronage from European students who schooling in Britain will no longer guarantee them some post-education jobs will no longer be the case. Over four million non-British Europeans living and working in the UK, including many international footballers will have to leave Britain because of difficulty of getting Britain’s work permits. This exodus of highly skilled workforce would be a big blow to the British economy which is more of a service economy than an industrial economy.

But to be fair to Britain, the questions are: How come major EU political and economic institutions were shared among only three countries—Belgium, France and Germany without considering locating one of these institutions in Britain? Also, why such an influx of unskilled EU labour to Britain, including those who had to relocate to Britain simply to claim unemployment benefits, a cost borne by British taxpayers?

Forced out of Eurozone customs union, British goods will encounter fierce tariff walls in the EU, which too could trigger new global economic rearrangements, and possibly the abandonment of free trade agreements promoted by World Trade Organisation. With the absence of globalisation that triggers a new recourse to economic nationalism and protectionism, African countries, particularly Nigeria, will no longer allow themselves as the dumping grounds of cheaper and better foreign made gods that have destroyed their industrial and manufacturing economies.

While NATO will remain in fact the major military power involving the US and Europe, the absence of the UK as a major player in the EU military and security decision-making will adversely affect the US use of Britain to have most of its way in such decisions. Besides major military hardware and software EU business enjoyed by Britain’s Royal Military Industrial Complex, Airbus, which besides using most of Rolls Royce engines and British navigational technologies, thousands of British engineers will have to be forced out of the Airbus. Large scale EU-driven research and development will exclude the UK along with hundreds of billions of dollars annually spent on subsidising European agriculture no longer enjoyed by British farmers. Denied free and easier access to the EU market, most British companies, particularly automakers such as Range Rover and international oil companies such as Shell that have their major markets in the EU would think of relocating from Britain to Eurozone economy since that is the only way they could continue to enjoy unrestricted access to the EU’s large consumer market.

Enjoying such a breathing space, Nigeria will not hesitate to roll out some draconian tariff policies in an effort to protect its infant industries from strong and powerful foreign made goods that have forced most of the country’s small businesses into premature bankruptcies. Also, as the pound falls along with one of the most priced real estate markets in the world, most Nigerians who kept their savings or their stolen money in Britain would like to exit the pounds and sell off their collapsing real estate assets. Here, they will meet their waterloo since the UK anti-graft and ant-money laundry authorities will refuse, threatening to hand them over to their counterparts in Nigeria. This is good for Nigeria.

Another benefit to Nigeria is that as Britain is kicked out of the EU, it has to renegotiate its trade agreements with virtually other countries including Nigeria, which it does on weaker terms. As the pound plunges, British goods, including industrial products such as plants and equipment, will become cheaper in countries like Nigeria. With the absence of the EU, British investors will have no option but to begin to invest in countries like Nigeria; this could mean relocating many factories from the EU to Nigeria.

Enwegbara, a development economist, wrote in from Abuja via [email protected]. 07038501486

4years Ago my wife left me,because I was too weak in bed, but today she calls me Bed Champion. Now I finally discovered a Natural Solution that forces women to ask for more. To know my real secret, visit www.naijahealthmatters.com