By JAMES B. STEWART

It’s hard to blame the British for casting an envious eye on Switzerland.

The famously neutral Swiss rejected membership in the European Union in a 1992 referendum, but Switzerland didn’t formally withdraw its dormant application until last week, when the Swiss Parliament — caught up in a burst of nationalism fueled in part by Britain’s vote on Thursday on whether to leave the European Union — decided overwhelmingly to terminate it.

Only “a few lunatics” still want to join the European Union, said the Swiss lawmaker Thomas Minder, a staunch proponent of “Swissism,” after last week’s action.

That may be an overstatement, but it’s easy to see why the Swiss would feel vindicated. With a per capita gross domestic product of $80,675 in 2015, according to the International Monetary Fund, Switzerland ranks second in the world (after Luxembourg), far ahead of Britain ($43,771) and the United States ($55,805.)

Switzerland’s unemployment rate was 3.3 percent in May, lower than that of Britain or the United States, which have both been hovering around 5 percent this year.

Switzerland has one of the lowest crime rates in the world, and there have been no terrorist incidents there in the last 30 years.

Known for its religious tolerance since a civil war during the Reformation, Switzerland accommodates four national languages and has a higher percentage of Muslims (5 percent) than Britain. Roughly a quarter of Switzerland’s population is made up of foreigners.

Switzerland’s reputation for cleanliness, punctuality and efficiency is so widespread that the Swiss tourism board pokes fun at the stereotype.

The only problem? It’s doubtful that Britain (or any other European country, for that matter) could replicate what’s widely known as the “Swiss miracle” by abandoning the European Union.

“It’s all an illusion,” said John McCormick, an English-born professor of European Union politics at Indiana University-Purdue University Indianapolis and the author of “Why Europe Matters for Britain: The Case for Remaining In.”

This isn’t simply because the island kingdom of Britain is so different from landlocked Switzerland, though it is. Its population of 65 million is much bigger than Switzerland’s eight million, as is its economy ($2.85 trillion in economic output in 2015 compared with Switzerland’s $664 billion).

Switzerland owes its highly productive economy to an overwhelming focus on lucrative jobs in financial services and precision engineering — in contrast to Britain, where the City of London financial district is a sparkling crown jewel encased in a broader, duller economy laced with generally aging manufacturers and a large, comparatively inefficient public sector.

Moreover, the hard-working Swiss all but invented the notion of the Protestant work ethic. (In 2012 Swiss voters firmly rejected an initiative to extend their annual paid vacation time to six weeks from four.)

“Switzerland’s prosperity has nothing to do with independence from the E.U.,” Professor McCormick said. “Services tend to be more profitable than industry, so Switzerland will always be ahead of the U.K. because of the way their economy is structured.”

He noted that Luxembourg, another small, landlocked European country with an economy oriented toward providing financial services for the world’s wealthy, is a founding member and staunch supporter of the European Union. Luxembourg’s per capita gross domestic product was $101,994 in 2015 — by far the highest in the world. 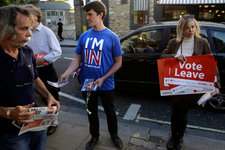 Interactive Feature | Latest Updates Britain is voting on whether to remain in the European Union. Follow along for updates, polling information and the context behind the vote.

An argument can be made that Switzerland’s economy would be in even better shape if it had joined the European Union. Its Alpine neighbor, Austria, joined in 1995 after years of debate. Its economic growth outpaced Switzerland’s in the ensuing years.

More fundamentally, the notion that Switzerland is less dependent on the European Union and enjoys a higher degree of sovereignty than Britain is also a “fantasy,” said Caroline de Gruyter, European affairs correspondent for the Dutch newspaper NRC Handelsblad and the author of a book about the impact of globalization on a Swiss village.

Switzerland, with its heavily export-driven economy, hardly exists in isolation. After the Swiss rejected European Union membership, Switzerland negotiated bilateral agreements giving it free access to European markets. In return, Switzerland agreed to abide by most European Union policies, including immigration and the relatively free movement of workers among countries. But Switzerland has no say in determining those policies.

“Switzerland and Norway cannot survive on their own,” Ms. de Gruyter said. “They want to participate in a lot of common E.U. projects.” But the “E.U. countries can decide on these projects, while Switzerland and Norway cannot. During European summits in Brussels, the Norwegian ambassador would often sit with me in the press room, waiting for decisions to be announced.”

“Sovereignty is relative,” said Christophe Crombez, a Belgian economist and specialist in European Union politics at the Europe Center of Stanford University. “Even the United States has to abide by World Trade Organization rules and other treaties. If you really wanted to be completely sovereign, you’d look to a country like North Korea.”

The European Union has rejected the idea out of hand, saying Switzerland can’t pick and choose which policies to embrace, and that it risks losing unfettered access to European Union markets. Negotiations were suspended pending the British vote. But once the British have made their decision, Brussels is expected to take a hard line.

The European Union has little choice, Professor Crombez said. “Within the E.U., some countries benefit in some ways, and other countries in others. That’s what has made the E.U. a success. If each country said it only wanted to participate in the policies that benefited it, the whole thing would fall apart.”

The Swiss vote also suggested there were limits to Switzerland’s open-mindedness. In addition to imposing immigration quotas, Switzerland is much more restrictive in granting asylum to refugees from places like Syria than many other European countries are.

“No one will say this, but there’s an element of racism,” Professor McCormick said. “What they want are white, Christian, European immigrants. They want to make sure they stay culturally homogeneous.”

The Swiss seem to be waking up to the consequences of defying the rest of Europe. Swiss citizens have gathered enough signatures to force a referendum on whether to retract the proposed immigration restrictions before the 2017 deadline.

“The Swiss have access to the European market, but they have very little leverage,” Professor McCormick said. “Britain has a good deal of influence, which it would lose if it left. The economic reality is that Britain would still be subject to the rules of the single market even if it left the E.U.”

Everyone I consulted saw similarities between the anti-European Union movements in Europe and supporters of Donald J. Trump in the United States.

“There’s a lot of correlation,” Professor McCormick said. “Many are nostalgic for the idea of the good old days, which in reality were never all that good. But in their imaginations they thought life was so much better. The E.U. makes an easy scapegoat.”

As in the United States, the underlying cause of so much voter resentment isn’t trade agreements or immigration. “The problem for individual European countries, whether they are members of the E.U. or not, is globalization,” Ms. de Gruyter said.