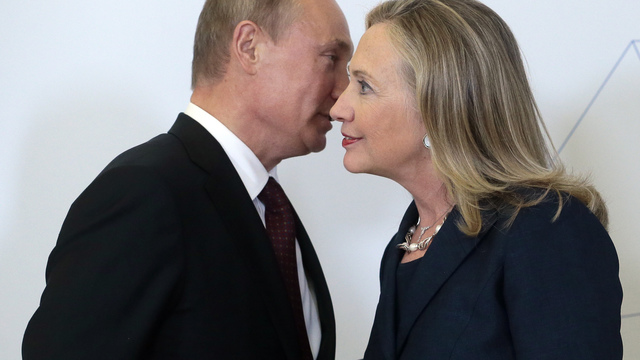 WASHINGTON (AP) — As secretary of state, Hillary Clinton basked in a diplomatic “Moscow Spring,” seizing on Vladimir Putin’s break from the presidency to help seal a nuclear arms-control treaty and secure Russia’s acquiescence to a NATO-led military intervention in Libya. When Putin returned to the top job, things changed.

Clinton, the Democratic presidential nominee, has vowed to stand up to Putin if elected, drawing on her four years of ups and downs as the public face of President Barack Obama’s first-term “reset” with Russia. By comparison, her Republican opponent, Donald Trump, has rung alarm bells in Washington and Europe with his overtures to the authoritarian Russian leader.

But Clinton’s wrangles with Russia led to mixed results. Her fortunes dipped dramatically after Putin replaced Dmitry Medvedev as president in May 2012.

Just weeks later, Russia outmaneuvered her in negotiations over a complicated Syria peace plan, dealing her what was arguably her worst diplomatic defeat. While Clinton hailed it as a triumph, the war only escalated. And while her aides still insist she came out on top, the blueprint effectively gave Syria’s Moscow-backed president, Bashar Assad, a veto over any transition government, hampering all mediation efforts still.

“There is no doubt that when Putin came back in and said he was going to be president, that did change the relationship,” Clinton said in a Democratic debate last year. “We have to stand up to his bullying and specifically, in Syria it is important.”

Clinton’s history with Russia is significant given the surprising role Russia has played in the U.S. presidential campaign.

Clinton and her supporters say she would be far tougher on Moscow than Trump, whose unusual foreign policy statements include musings about NATO’s relevance and suggestions that he could accept Russia’s annexation of Ukraine’s Crimea region. Russia’s reported hacking of Democratic Party email accounts also has led to charges that Putin’s intelligence services are meddling in the election, and Trump aided that perception by publicly encouraging Russia to find and release more of her emails.

With Putin focused on domestic matters during a four-year stint as prime minister, Medvedev opened up a new corridor for U.S. forces and materiel heading to Afghanistan as part of the U.S. surge in the war. After missile defense concessions by Obama, the two nations sealed their most ambitious arms control pact in a generation. Washington and Moscow united on new Iran sanctions. Years of trade negotiations culminated in Russia’s entry into the World Trade Organization.

But it was perhaps Clinton’s unlikeliest diplomatic breakthrough that began the downward spiral: Libya. Even before Putin’s first two terms as president, Russia had always opposed U.N. Security Council action that might lead to a leadership change.

As America’s European allies sought a military intervention against Libyan dictator Moammar Gadhafi, Clinton played the role of skeptic, refusing to jump aboard. When she finally did, it proved critical in persuading Russia to abstain. The rebels overthrew Gadhafi five months later.

“It was the first time that Putin publicly criticized Medvedev,” said Michael McFaul, Obama’s main Russia adviser at the time and later U.S. ambassador in Moscow. “When things went poorly and not according to plan as we had promised, I think that was the beginning of the end for the reset.”

Relations soured further by the end of the year as Putin won a new, six-year presidential term. Evidence of election fraud led to the largest protests since the collapse of the Soviet Union. Clinton issued a sharply worded statement; Putin accused Clinton of sending the “signal” to undermine his country.

If Libya destroyed trust, McFaul said the demonstrations were the reset’s “body blow.”

“Putin got paranoid,” he said, and “believed we were behind them, really believed it. We never gained traction after that.”

Returning as president in May 2012, Putin was immediately confronted with Syria’s Libya-like escalation from Arab Spring protests to full-scale civil war. He played his cards differently than Medvedev, hinting to Obama that he could drop his support for the Syrian leader while shielding Assad from any U.N. pressure or foreign action that might chase him from power.

“Putin claimed that he had no particular love for Assad,” Clinton wrote in her memoir “Hard Choices,” recalling a meeting between the U.S. and Russian presidents in June 2012. “He also professed to have no real leverage with Damascus.”

Seeking Russia’s cooperation, Obama and Clinton avoided any talk that might threaten Russian equities in Syria, including a large naval base there. Their message was clear: The U.S. wouldn’t try to pull a future post-Assad government out of Moscow’s orbit.

It didn’t matter. When the U.N. proposed a peace plan that involved ushering Assad out of power and included penalties for noncompliance, the Russians balked. Faced with stalemate, the U.S. and Russia arrived at a formula for a new government comprised of individuals chosen by the “mutual consent” of Assad and the opposition.

Although Clinton claimed credit for the June 30, 2012, compromise in Geneva, it appeared to be Russia’s objective all along.

“There was no way Assad would pass such a test,” Clinton said. “The opposition would never consent to him.”

Russia didn’t read the deal that way. Neither did Assad. And Assad is still president.

“Putin doesn’t do favors,” said Stephen Sestanovich, a Russia specialist at the Council on Foreign Relations and a senior diplomat under Presidents Ronald Reagan and Bill Clinton. “If we had had a robust policy in Syria and said, ‘This is what we’re going to do; what are you going to do?’ — that’s one thing. But we didn’t. We asked for help and the chances of that working were zero.”

The Geneva deal has had long-term repercussions. The U.S. and Russia both say it must be the basis of any settlement to the five-year civil war. But their interpretations still differ, contributing to a standstill that keeps Assad in power.

At the time Clinton negotiated the Geneva deal, some 8,000 people had been killed in Syria. Since then, the death toll has risen to perhaps 500,000, with millions of refugees and the Islamic State group emerging.

“I doubt they could have gotten more out of Russia,” said Robert Ford, who was U.S. ambassador to Syria at the time and is now a senior fellow at the Middle East Institute.

Clinton’s deal could have proved viable, if backed up by American military pressure, he said. But Obama didn’t see it that way. “The tactics were not in sync with the strategy,” Ford said.

Frederic Hof, a senior member of Clinton’s delegation to the talks, called the document a “roadmap to peaceful regime change.” But others in the U.S. government were unwilling to do anything to realize the plan, he said, adding: “This is why Syria continues to hemorrhage internally and externally.”

Clinton, in any case, was mistaken if she believed Obama was prepared to act militarily in Syria.

With her plan doomed to fail otherwise, she joined Defense Secretary Leon Panetta and CIA Director David Petraeus later that year in urging Obama to authorize military support for vetted, moderate rebels and U.S. enforcement of a no-fly zone over opposition-held areas of the country.

Clinton has acknowledged her frustration with an increasingly hostile Russia on Syria and other matters as her time in office wound down.

In her final months, Russia ordered the end of all U.S. Agency for International Development programs in the country. It approved a new law constraining the work of Russian and foreign non-governmental organizations. It banned U.S. adoptions of Russian children.

In December 2012, Clinton accused Putin of trying to “re-Sovietize” its region. And just before leaving, she wrote a memo to Obama urging him to finally suspend a reset that ended once and for all with Russia’s military incursions in Ukraine and annexation of Crimea in 2014 — well after Clinton had left government.

“Strength and resolve were the only language Putin would understand,” Clinton wrote in her book, published shortly afterward.

It was a lesson she could say she learned firsthand.