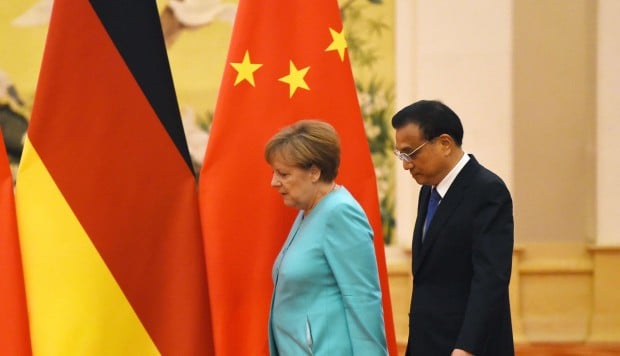 Beijing does not want a trade war with Europe and has called for all business disputes to be solved in the “proper way”, China’s leaders told German Chancellor Angela Merkel in Beijing on Monday.

Premier Li Keqiang said that unilateral trade protection measures would not help to resolve problems and vowed that China was committed to phasing out its cheap, low-quality steel production – one of

Merkel called for further talks with Beijing over its push for the coveted World Trade Organisation market economy status.

Their comments, at a joint press briefing, shed fresh light on the increasingly strained bilateral ties between the two largest economies in Asia and Europe, with disputes over trade, foreign investment and China’s industrial overcapacity, especially in steel.

Sources said talks over China’s steel overcapacity – widely blamed for a surge in cheap exports, which have caused the closure of steel mills in European nations, including Germany – were “tough”.

There is probably no market economy status without a steel deal

The source said: “There is probably no market economy status without a steel deal.”

China has long regarded Germany – one of its closest trade partners – as playing a key role in its European plans.

However, their economic and political ties have faced growing pressures in the past few months, particularly since May’s decision by European Union lawmakers to overwhelmingly vote against granting China the status of “market economy”.

They cited concerns over the “strong social, economic and environmental consequences in the EU” from China’s exports, especially in sectors with chronic overcapacity such as steel.

Beijing has been actively lobbying for support, including from Merkel, to change the EU lawmakers’ opinion before their discussions in December about whether to grant the approval – something Beijing says is its right 15 years after joining the WTO.

Li said China recognised European concerns about the mainland’s steel production overcapacity, but said that the issue was a symptom of the falloff in global demand.

“We don’t deny that there are many difficulties between Germany and China, for instance, the wide concern over China’s steel overcapacity,” Li said.

He also stressed that China had already fulfilled its obligations about gaining market economy status, and called for other parties to grant approval.

“We don’t want to fight a trade war because this will not benefit anybody,” he said.

In a meeting on Monday, President Xi Jinping told Merkel that both sides should continue to push for deeper cooperation and ensure that “core interests were taken care of”.

Merkel told Li that while Germany was open to foreign investment it expected the same from China, and stressed the need for a level playing field for foreign firms.

Most issues that can be talked about have been discussed in the past. Only those key issues involving core interests are left, and it’s hard to either side to make a concession

The German chancellor, making her ninth visit to China since taking office, also expressed concerns about Beijing’s controversial law on non-governmental organisations, which would put foreign NGOs under strict police scrutiny when it takes effect next year.

Experts said the latest round of intergovernmental talks would be more difficult compared with those in the past.

“Most issues that can be talked about have been discussed in the past,” said Wang Yiwei, a professor at Renmin University. “Only those key issues involving core interests are left, and it’s hard to either side to make a concession.”

Sebastian Heilmann, president of the Mercator Institute for China Studies, in Berlin, said after a “golden decade” of steadily growing economic exchanges and frictionless diplomacy, Chinese-German trade and investment now faced major changes, as a result of increasing industrial competition and concerns about unfair market environment in China.

Dumping at heart of Chinese trade stand off

“For these reasons, we should expect a proliferation and intensification of hidden and open conflicts in Chinese-German interactions in the coming years,” Heilmann said.