CHENGDU, Oct. 14, 2020 /PRNewswire/ — Southwest China’s Chengdu, a top travel destination with vibrant cultural creativity in the country, will offer a slew of supportive policies and investment opportunities centering on building the city into a world renowned cultural city on October 15. The October event is carried out by National Business Daily. 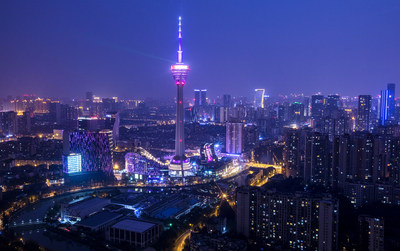 The night scene of Chengdu

The upcoming event is to be held at the E-sports Hall of Fanmate Creative Area, which is located at the eastern outskirt of the city. A total of 51 favorable policies, investment opportunities worth of 284.8 billion yuan (42.3 billion U.S. dollars), 100 new products and 100 scenes related to culture, sports, and travel industries will be unveiled at the event.

The policies and opportunities echo Chengdu’s efforts to build itself an internationally well-known city of culture & creativity, tourism, sport events, gastronomy, music, and exhibitions. All these six sectors saw double-digit year-over-year growth in 2019. Data shows that Chengdu is the second most popular travel destination during the recent National Day holidays.

At the event, Chengdu-based CoCo Cartoon, the producer of China’s highest-grossing animation movie Ne Zha, will unveil an animation-reality-mixed show co-produced with Chengdu Yongling Museum. The show will feature musicians and dancers from over a thousand years ago and put them in six representative Chengdu scenes.

Another highlight of the event is the attendance of popular Chengdu e-sports club All Gamers, which has earned reputation for outstanding performance in Honor of Kings and PlayerUnknown’s Battlegrounds pro leagues, including one championship and three silver medals in the King Pro League. The phenomenal mobile game Honor of Kings was developed by Chengdu-based TiMi Studios.

Besides, a group of distinguished guests will gather at the event to offer their insights on fostering a city of culture. The list include Paul Owens, Director of the World Cities Culture Forum, Jean-Luc Monterosso, member of France’s Académie des Beaux-Arts and curator of Chengdu Contemporary Image Museum, and Patrick Nijs, former ambassador of Belgium to China and co-founder of EU-China Joint Innovation Centre.

The event is part of a year-long campaign to boost the new economy sector in Chengdu, which will publish 1,000 new products and 1,000 new scenes in the sector by the end of 2020. The October event is organized by a number of municipal authorities of Chengdu and the government of the Longquanyi District.