China, US ‘still in talks on trade pact despite challenges’ 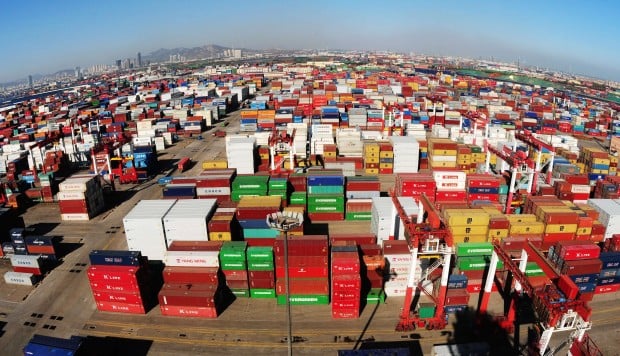 China and the United States are still in frequent discussion about a bilateral trade pact, despite a challenging global trade environment, a Chinese commerce official said on Thursday.

China is keen to maintain open markets for its goods as its economy grows at its slowest pace in 25 years, but it faces rising trade tensions as its imports deteriorate faster than exports, setting it up for another record trade surplus.

Last year, the US trade deficit with China was US$336.2 billion, according to the US Trade Representative’s office.

Republican presidential candidate Donald Trump threatened on Wednesday to slap tariffs on Chinese products to show Beijing the US is “not playing games any more”.

Outfoxed by Hong Kong tycoons, Donald Trump has China chip on his shoulders

The US – China’s second-largest trade partner after the European Union – has imposed anti-dumping and countervailing duties on Chinese products and also brought cases against China at the World Trade Organisation.

“The global economy has not emerged from its difficulties, which has led a lot of countries to adopt trade protectionist policies,” China’s Ministry of Commerce spokesman Shen Danyang said in a rare conversation with reporters over coffee in a Starbucks cafe near Tiananmen Square.

“There is no evidence China is dumping steel products. Growth in exports is due to greater competitiveness of Chinese firms, as costs have fallen,” Shen said.

What is crippling China’s once powerful export machine?

In response to claims by the head of the US Export-Import Bank (EXIM) Chairman Fred Hochberg that China gave its exporters 10 times more financing than the US did in 2015, Shen said there are disagreements on what constitutes subsidies.

If there are disputes, the two sides could take it to the WTO, he said.

Shen did not offer any details on plans announced on Tuesday to open more sectors to foreign investment, but said foreign companies were not investing in China as much as before because competition from Chinese companies was increasing.

China is not part of the US-backed Trans-Pacific Partnership (TPP) accord involving 12 Pacific Rim countries. TPP members have said the pact is not meant to target China.

Beijing is separately pursuing a regional framework with its trade partners that omits the US.

Game on: How the US and China are vying for dominance in the battle of the Asia-Pacific trade pacts

The biggest challenge facing China’s economy is the need to effectively implement supply-side reform to improve the structure of the economy, he said.

“There is demand for quality products, but that has to be met with effective supply. It requires innovation, which is difficult,” Shen said.

“In the past, when facing slowing growth, we would stimulate demand – loosen monetary policy, use fiscal measures. Now we are focusing primarily on using structural supply-side reform. This is the right direction, but it’s not easy.”