China Reaches WTO Milestone, Or Is It Millstone?

This Sunday marks the 15-year anniversary of China’s entry into the World Trade Organization, a milestone originally anticipated to mark the communist-ruled country’s rise as a market economy.

Beijing sees the date as the moment where it will become a market economy by default, as provisions in its accession agreement to the trade body will no longer apply. But the European Union, United States and other countries do not agree.

Japan and India are unlikely to immediately adopt the label. Some believe the EU eventually may give China market economy status (MES), but may take steps to dilute the Chinese market’s influence.

The milestone comes at a testing time for the world’s second-largest economy, which is experiencing its slowest economic growth in a quarter-century. While China in October reported its economy expanded by 6.7 percent for a third straight quarter, that rate lags years of double-digit growth after the country joined the global trade body. By comparison, the U.S. economy – the world’s largest – grew at an annual rate of 3.2 percent in the last quarter, the Commerce Department reported. 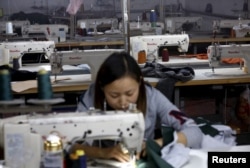 The market economy label is an important one for China, not only because of the prestige and status it carries, but also because it would dramatically reduce resistance to Chinese trade and anti-dumping tariffs.

Many analysts contend that China heavily subsidizes state-owned enterprises and encourages its companies to engage in price cutting and dumping goods across the world. Beijing challenges this view, arguing that Chinese companies operate freely without any government support.

“The most neutral judge of whether China is complying with its WTO commitments is the WTO,” said Scott Kennedy, who directs the Project on Chinese Business and Political Economy at the Washington-based Center for Strategic & International Studies.

So far, China has lost a majority of its cases at the WTO, Kennedy said. Verdicts have been reached on 16 out of 24 cases involving Beijing.

“By my count, China lost outright in 13 of those cases, and it received a split decision in three of the cases,” Kennedy said. “Cases against China primarily involve various aspects of Chinese industrial policy, which the WTO has repeatedly found inconsistent with China’s commitments.”

But Beijing has a different take on that. A recent editorial in the People’s Daily, the mouthpiece for the Communist Party, said that China is entitled to automatically be regarded as a market economy from the anniversary forward and that it is the “obligation of the EU and other WTO members” to do so, not because it is some favor for China.

The tussle over China’s trade status could add to an already bitter global battle over free trade. Protectionist views have emerged in Europe since the Brexit vote in June, and U.S. President-elect Donald Trump has vowed to slap heavy import tariffs on Chinese goods.

“The great irony of Trump’s victory is that China is now the world’s most important proponent of free trade,” said Eli Friedman, an associate professor at Cornell University’s Industrial and Labor Relations School.

He said the possibility of a protectionist turn in the West would really spell trouble for China’s exporters, still a mainstay of the Chinese economy.

“Many countries are now looking to China to push forward on free trade, an agenda that is increasingly unpopular among voters globally,” Friedman said.

Getting the WTO label would seem to fulfill part of Chinese President Xi Jinping’s Chinese Dream, a larger project aimed at raising China’s global prestige. But so far, Beijing has been muted about opposition to the label. China seems likely to take Deng Xiaoping’s famous advice and “cross the river by feeling the stones.”

Ethan Cramer-Flood, associate director of The Conference Board’s China Center and Asia Programs, China is unlikely to launch litigation against its trading partners a day after the anniversary. It could start with slow-rolling retribution such as countervailing duties and taxes against foreign companies and on foreign goods going into China, he said.

“I would be very surprised if it turns into a massive international fight, particularly with the new leadership in the U.S.,” Cramer-Flood said. “This hardly seems the time to start something.”

David Dollar, a senior fellow at The Brookings Institution in Washington, agrees. He said China may bring a case to the WTO over its status, but it’s likely wait to see the full range of trade measures unveiled by the Trump administration.

Market economy status “is an important symbolic issue but not that important in practice,” Dollar said. “Some of the measures that Trump talked about in the campaign, such as a 45 percent tariff on imports from China, are much more serious, and it makes sense for China to take a cautious approach with the new administration in the hope that this was just campaign rhetoric.”