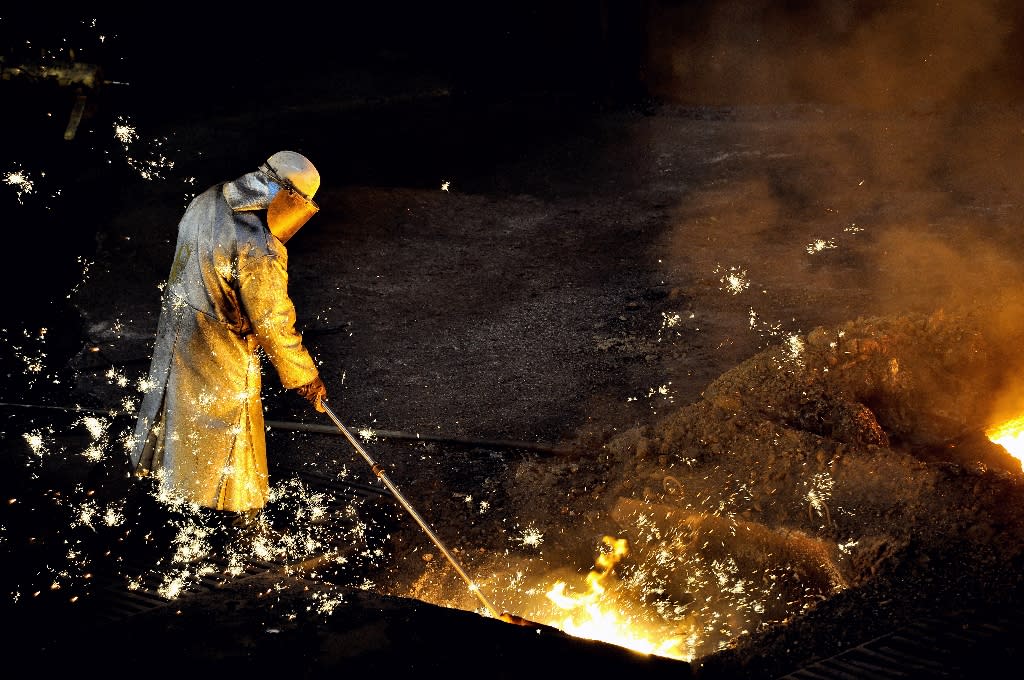 Angry steel manufacturers in Europe have urged the EU to mirror the United States in punishing China with fresh tariffs, but the Brussels based bloc has so far proved reluctant to challenge Beijing more directly on the issue (AFP Photo/Philippe Huguen)

Brussels (AFP) – China firmly defended its efforts to address the steel crisis on Monday, rebutting accusations that its cheap exports were causing plant closures and job losses across the globe.

Ministers and top officials from steel-producing nations met in Brussels to address the crisis in a first round of talks described as “frank” by co-organiser Belgium.

“China does not subsidise its steel export industry. Everything we do is in strict compliance with World Trade Organization rules,” China’s Assistant Trade Minister Ji Zhang said after the talks ended.

“The financial crisis has led to slowdown in the world economy. This is the fundamental reason for steel over-capacity,” he added.

China’s position was strongly contradicted by other producing nations, with a top US official warning Beijing about the economic hardship brought to steel-making regions in the United States.

“This is not an academic exercise. This is an exercise in dealing with real pains, real people, real workers, real economies,” said US Deputy Trade Representative Robert Holleyman, sitting beside his Chinese counterpart.

China produces more than half of the globe’s steel output and is accused of flooding the world market with oversupply sold at below cost in violation of global trade rules.

Indian giant Tata Steel put its loss-making British operation up for sale last month leaving thousands of jobs at risk, in the latest example of the crisis.

“The discussion today with all these countries coming together is something that we pushed for and… China’s participation will help make the difference,” Britain’s business minister, Sajid Javid, said on the sidelines of the talks.

The OECD, the grouping of world industrialised countries that co-organised the event, however said the countries could not agree on a joint statement amid the tensions with Beijing.

“I’m sure that countries would have wanted to take concrete steps, but the solution is not a simple one,” said OECD Deputy Secretary-General Mari Kiviniemi.

France was especially strong on taking a tough stand against China.

“We will tell our Chinese partners… you do not respect the rules governing world trade,” said French Economy Minister Emmanuel Macron.

Angry steel manufacturers in Europe have urged the EU, the second biggest producer in the world, to mirror the United States in punishing China with harsh tariffs.

The US in March slapped tariffs of nearly 300 percent on so-called cold rolled steel, used to make auto parts, but the EU settled on a more cautious 20 percent for the same product.

The EU currently has dozens of anti-dumping measures in place against China, several involving the steel industry, but critics argue these are not enough.

At the talks, EU’s Trade Commissioner Cecilia Malmstroem said the steel crisis was “now life or death for many companies”, but said that tariffs were “only a short-term bandage”.